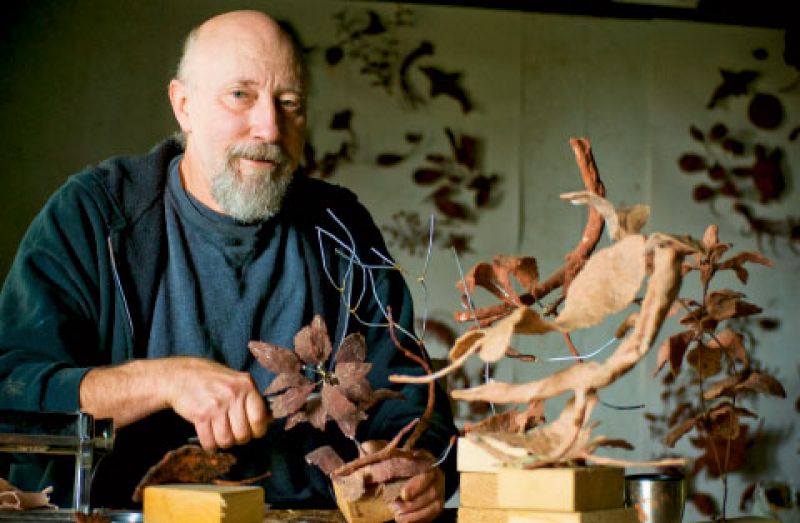 “At high tide, when the water is still, you can see amazing reflections,” says Joe Walters, gazing out over the marsh behind his James Island home. “I’ve always been interested in reflections and mirror images. They lend themselves to abstraction.”

Walters is well-known across the Southeast for his organic sculptures, the inspirations for which frequently emerge during kayak trips through Lowcountry marshes and blackwater rivers. Despite the naturalistic components, he considers his works abstract compositions, with elements such as birds, leaves, or aquatic flora and fauna rendered in unusual scale.

Walters developed his keen eye for nature’s aesthetic growing up in Kentucky’s hill country, an area that fostered his interest in both art and archaeology.

After earning his MFA from East Carolina University, he worked in graphic design, devoting off-hours to personal projects. When his art began earning him commissions and interest from galleries, he quit his office job. In the mid-’90s, a fellowship from the South Carolina Arts Commission drew the sculptor here. Although he maintains a low profile on the local art scene, recent exhibitions have taken his work to Atlanta, Miami, and Charlotte.

Each sculpture begins as a series of metal skeletons, which the artist covers with polymer clay. When baked in an oven, it hardens into a plastic substance. Walters then covers the objects in glue and sand for texture. Finally, he applies a base coat of enamel and flicks on acrylic paint for added color. “It’s an eccentric process that’s evolved over years of working with mixed media,” he explains. “I’ve always liked things that look aged and old.”

Walters pursues this in his paper works as well, forming images using tea for color and layers of shellac and beeswax for texture. Like sculpting, creating these “drawings” is an intensely physical method, rendering shadowy images in tribute to the reflections wavering across the marsh. “Here I can see nature in all its processes,” he says, looking over the water, “the full circle of life.” —Katherine W. Giles