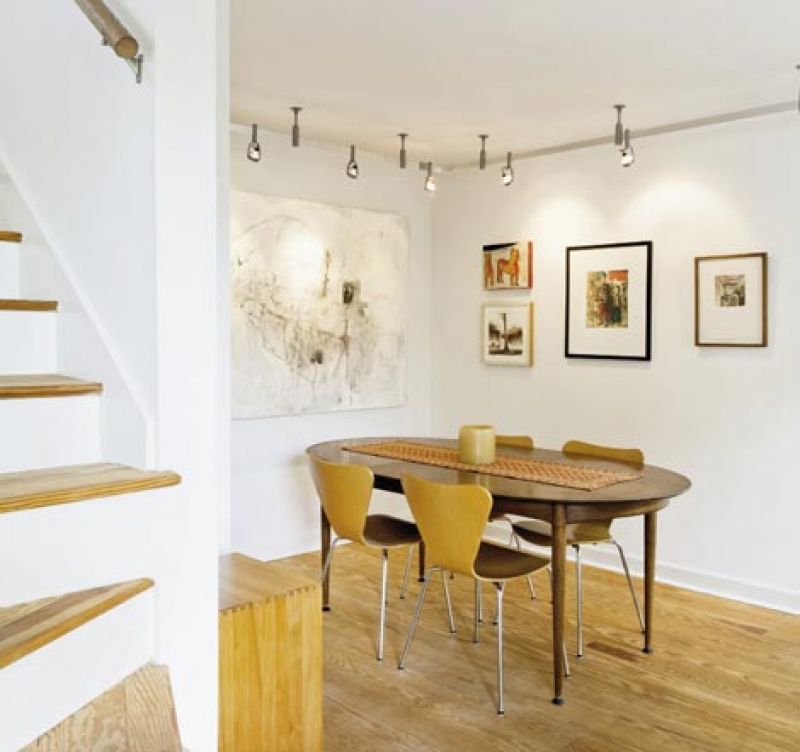 It was all there, contends homeowner Whitney Powers, on the merits of the plain-Jane, 1970s brick dwelling she bought with her late husband, Edwin Gardner, 12 years ago, when their daughter, Olive, was just a year old. The spectacular sunlight, the well-situated rooms, the clean lines—a subtle swan tucked into an eclectic architectural lineup of towering Victorians and sweet bungalows on Gadsden Street.

“When we first saw the house, it was rather grim,” says Whitney. “It had wall-to-wall carpeting, dark paneling, and architectural elements that seemed cobbled together—like cheap trim and the sort of stair railings you’d buy at a big-box store for your deck. The lack of delicacy was rampant.”

It’s hard to imagine, then, that light would be the saving grace of something so, well, unrefined. But it was.

“The first floor is a half story above ground, so the light coming in was remarkable,” says Whitney. Like a good cleaning, it brought the crux of the house into view: a five-room, 1,200-square-foot dwelling with a fluidity that fit her family to a tee.

Except that at first, the six-foot-two Edwin wasn’t so sure. As in, “You’ve got to be kidding” unsure, recalls Whitney. “He was a tall guy looking around a petite house. He didn’t see it immediately, that small spaces can be comfortable and not claustrophobic.” Not to mention the kitchen—situated at the tail-end of the house—was dated and awkward, the lone downstairs bathroom opened directly into the dining room (of all places), and there was no outdoor living space, just a mess of shrubbery that was “horrid and prickly.”

But Whitney, an architect with an eye for contemporary, streamlined interiors,  assured her husband that the house they wanted was there—it was just a matter of finding it.

With time and expense a factor, the pair bumped the kitchen to the bottom of their fix-it list and started with the bare basics: using that streaming sunlight to their best advantage. “We replaced the dark paneling and trim with clean white walls and a bank of built-in bookshelves in the living room—this better reflected the light that came in from the south,” says Whitney. And instead of knocking down walls to pick up a little more breathing room, she cleaned up the lines that defined them. This meant evening out bumps in the drywall, smoothing out ceilings, and getting rid of cumbersome architectural elements. “On the stairs, for instance, we realigned the walls and removed a bulky beam and those clunky railings. This allowed the stairs to become more seamless with the first floor.  The dog has a bed on the low landing, we can sit on the steps—it becomes a central element to the downstairs theater.”

With the interior streamlined and “able to breathe again,” as Whitney puts it, the pair was content to leave their dwelling to its modest footprint (its slim profile and side entrance modeled after a traditional single house). They fixed the powder room oddity by moving the door to open to the living room, and a sunny terrace off the kitchen was the only addition.

“This is just the right amount of room for our family to connect day to day,” says Whitney, who credits Edwin with the idea of outfitting the once-overgrown courtyard with a fire pit and beanbag seating for Olive, now 13, to host pals. “We wanted her to grow up in an environment where we’re not on top of each other, but we interact; where our paths cross, but you don’t feel the need to disappear just to find privacy. That was always Edwin’s concern—that when she became a teenager, she’d retreat elsewhere in search of her own space—so we carved out a place of her own.”

Nearly two years since Edwin’s death, Whitney hardly looks at the courtyard, the terrace, the living spaces as a one-after-another cycle of projects but, rather, as a slow evolution. “What’s here is emblematic of the choices we made as a family. They’re not mine or his or Olive’s, but a framework you can add to and move around and wiggle with a little. We still share in all of this house; it’s not static.”

Indeed. Remember that old, dated kitchen that moved to the bottom of the TLC list? Up until last year, Whitney still lived with its considerable flaws: an out-of-scale fridge that partially blocked her path, oven and dishwasher doors that collided in the tight quarters, cabinet drawers that fell out when you pulled too far, and a strong suspicion mice were camping out under the old appliances.

Then, just before the holidays—the first since Edwin died—Whitney found a scarf hidden in an envelope. Her husband had bought it earlier that year and tucked it away to give to her as a Christmas gift. “I told Olive to put it under the tree,”  Whitney recalls. “Then on Christmas morning, we were opening presents, and I picked up the envelope. But it was empty, the scarf wasn’t there. I looked at the kitchen, and I knew. Those mice had taken off with my scarf. That was the last straw—it was time to renovate the kitchen and, well, get my scarf. And sure enough, when the contractors moved the dishwasher, there it was.”

Aptly motivated, she slimmed down upper cabinetry doors, replaced appliances with smaller, updated versions—“If I’d have brought in a Viking range, it would have eaten this kitchen alive”—and grouped the tallest pieces (stacked washer/dryer and refrigerator) to one side, creating a wall, rather than impediments. “Everything’s more of a Euro size now,” says Whitney. “The kitchen doesn’t look small, because everything in here is sized down. It’s a workspace that fits now.”

And it’s suited to her, too, right down to the soapstone countertops. “It’s a native stone, so it changes. It’s alive with what happens in this kitchen day to day, and I like that. It doesn’t finish, it continually reflects the life around it.”

And that’s always been Whitney’s style. It’s how that kitchen came to be. It’s what keeps her watching the light streaming through the windows, noting the changes from summer to winter and back again. And it’s why these rooms are peppered with stories—an exotic olive shell from a trip to the Indian Ocean, Eames chairs from Edwin’s childhood basement, palmetto leaves Olive has woven into ornaments, even glass remnants from the banks of the Thames collected by Olive and her father the month before he died.

“It’s not about accumulating, and it’s not about projects that you finish and then they’re over,” concludes Whitney. “It’s about keeping our house alive with what’s special to us, because it’s the richness, the evolution of it all, that sustains us.”