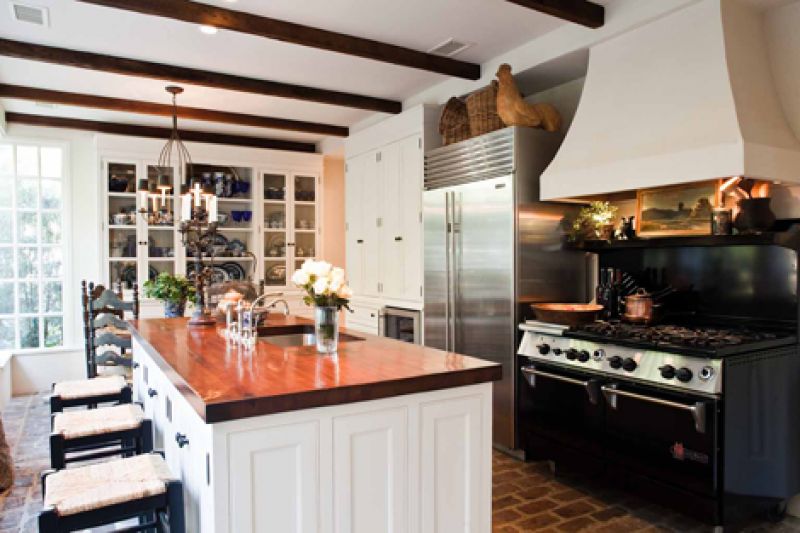 In a town where houses and residents alike sport pedigrees, carry hyphenated names, and have blueblood lineages that root back before America was even America, 61 Meeting Street is a double whammy, and current owners Pete and Pinky Peters love sharing all aspects of its story.

As for the home itself, the two-story, stout-walled stucco structure that runs along the block of Meeting between Tradd and Broad streets has sat on prime real estate on what’s been Charleston’s “Mansion Row” for the past few hundred years. The lot—plus surrounding acreage—was acquired in 1747 by well-to-do silversmith Benjamin Savage, who three years later gave it to his daughter Elizabeth as part of her dowry when she wed William Branford.

Branford, who owned the land we now call Charles Towne Landing, was no slouch himself. By 1767, the wealthy planter had moved his bride into a veritable compound that he built on her inherited property, an enclave complete with a mansion, kitchen house, and first-class stable. Less than 25 years later, the main house sheltered a family of eight, while the three rooms above the stables—and perhaps above the kitchen house as well—were home to 34 slaves.

In the 1800s, Elizabeth and William’s grandson, Elias Horry (president of the South Carolina Canal and Railroad when the line to Charleston was the longest in the world) inherited the property. Today, 59 Meeting Street is known as the Branford-Horry House and is on the National Register.

Eventually the home fell out of family lines, and the massive lot was subdivided. The kitchen house was demolished, and a new abode grew up in its stead. And the stable? It gained its own identity and notoriety as “Judge Waring’s old house.”

Judge Julius Waties Waring, who was born in Charleston in 1880, married Annie Gammell in 1913; her parents gave them the one-time stable after their “I dos,” and by 1915, it was transformed into a proper, well-heeled residence with its own address—61 Meeting Street.

Over the years, Waring became a federal judge and was both celebrated nationally (for ruling that blacks should have equal voting rights in South Carolina primaries, and for making the dissenting opinion that separate was not equal in a case that became a stepping stone to Thurgood Marshall’s Brown v. Board of Education) and vilified locally (for divorcing Annie, marrying Northern import Elizabeth Avery, and moving his new bride to the Meeting Street house).

All that history is enough to weigh down a house and its inhabitants. But not the down-to-earth Peters, who marvel at the tales, admire the home’s lovely bones, and gladly share each with locals and tourists alike, especially when the Historic Charleston Foundation’s house tours are in swing.

“When we first bought the place in 1995,” says Pinky, who grew up boarding at Ashley Hall and whose husband was born here and attended The Citadel, “everyone said, ‘Oh, you bought Judge Waring’s place.’ And it really felt like his.

“And then,” she says, “when we renovated the second time and had to repoint all the mortar—it was crumbling like sand—we found haint blue all along the wall in the upstairs room that faced the Branford-Horry House. If that paint was supposed to keep out bad spirits, it really makes you wonder about what the slaves living in there—piled into three little rooms—meant.” She gives a knowing pause. “The paint was faint, weak, too, as though they’d had to stretch the color to make it last.

“Even so,” Pinky says, antebellum ghosts aside, “I don’t feel that there are demons or saints lingering here. We’ve been here long enough that it feels like ours. I love the oldness of it, and I love Charleston for that, too. Plus,” she laughs, “by comparison, it always makes me feel young!”

Pinky’s delight bubbles forth as she walks through the place, explaining how the house originally included the arched, streetside entry door (tall enough for horses to pass through), stalls to the right and left, and a center stairway up to a second floor of three small rooms. The Warings added a dog-legged, adjoining kitchen (where the library now stands) with a bedroom above and a loggia where the kitchen is now situated.

By the time the Peters first saw the house in the early ’90s, the place was partially gutted, partially remodeled, and kitchenless. There were a few upgrades in the year that lapsed before they bought it, but it still needed some work to make it livable. Among other improvements, they rerouted the HVAC system, added a new barrel tile roof, refinished the floors upstairs, installed new kitchen appliances and cabinets, and graded the courtyard to stop water from seeping into the house.

In 1996, they moved in and, almost a decade later, enlisted Beau Clowney Design to oversee phase two, which entailed creating a marble bath off the upstairs master bedroom, widening the entry between the music room and library, putting a wall of windows between the library and garden, re-stuccoing the exterior, removing rotting wood, and retreading the stairwell with marble. The end result is a roughly 3,400-square-foot home with well-proportioned rooms that mimic the scale and volume of the original spaces. Styling-wise, Pinky employed a light touch, keeping things neutral to amplify the sunlight that pours in from the horse-stall windows, just high enough to make window treatments unnecessary. And with input from interior designer daughter Meredith, she’s filled it with favorite pieces from homes past—antique leather books and a vast art collection that includes pieces from those near and dear: her Aunt Francys, daughter Ashley, son-in-law John Dunnan, and one drawing of her own.

“When this house came on the market in the early ’90s, we didn’t buy it. I was so upset, I couldn’t even drive past it,” says Pinky. “I’ve never wanted to live in a place so badly. Now? I don’t know what to say other than I tell everyone I am not leaving—I’ll have to be carried out.” And here at 61 Meeting Street, the stories continue to unfold, and its characters thrive.