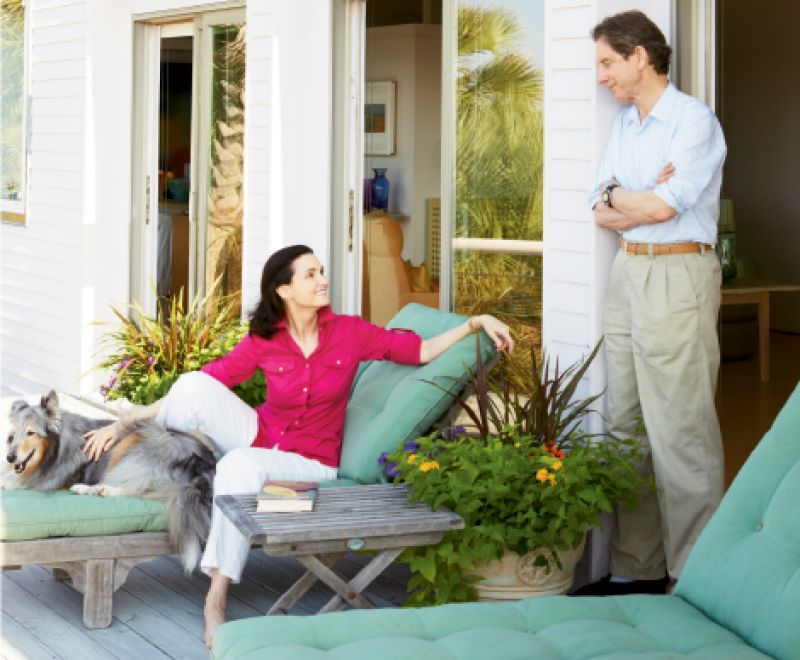 David and Carol Rawle have lost track of time. Again. It’s inevitable, the couple says, whenever they indulge in their favorite form of escape—a walk led by two of the happiest dogs in the world on the beach that fronts their extraordinarily serene Isle of Palms home. It’s a place that both Rawles describe as magical. “We are living on an island oasis,” says David. “There’s peace and joy in being together here.”

Nested in myriad palms, the Rawles’ summer retreat is a house that, by design, celebrates the presence and beauty of its oceanfront setting. At first view from the road, the building appears staunchly geometric; its cubic form and clean lines stand out as a modern anomaly among the island’s more traditional styles. Upon approach, however, visitors encounter a delightfully unforeseen curve. A stairway leading up to the front entrance—on which a speckled robin’s egg porcelain doorknob playfully suggests the nature, art, and color triumvirate that dominates within—ushers your attention to a beachfront deck’s gently arched perimeter. Shaped like the bow of a ship, this southeasterly sitting space presents the stunning panoramic vista of a splendid expanse of sand, sea, and sky.

As if expressing further homage to this scene, large, unadorned, single-paned windows set in prominent alcoves frame slices of coastal tableaux. The size, scale, and positioning of the rectangular glass, reminiscent of fine art at a contemporary gallery, blur the line between landscape and shelter. “There is a connectivity to the elements,” says Carol, contemplating the experience of spending the day here. “You don’t have to do much; you just have to be.”

Fifteen years ago, when David hired renowned architect W.G. Clark to reconfigure the 1,400-square-foot house within its original footprint, he had not yet met his future wife; but five years later, when she arrived at this idyllic setting for their first date, Carol instantly felt at home. “My friends said, ‘This is so you,’” recalls the Florida native, noting that a childhood spent beachcombing the Gulf Coast barrier island of Sanibel, the “Seashell Capital of the World,” engendered her “shellaholic” core. “It’s in my DNA. I love seeing what comes up in the waves.”

David, too, cites the movement of water as a key component in his sense of peace here. “I grew up on Long Island Sound, which was very still,” he explains. “I always longed for the motion, dynamics, and noise of the waves.”

The dependably rhythmic surf is one of many forces that draw them to the airy retreat. Because both David and Carol stay intensely occupied with their businesses—he, as the founder and chairman of Rawle Murdy, a marketing communications firm; she, with Harry Barker, her company of environmentally conscious pet pampering products—the couple craves the infusion of soulfulness and breathing room that is part and parcel of their beach abode. “You arrive here and become aware,” says David. “It’s about paying attention. Connecting to the things that really matter.”

The Rawles do not have a television in this house. When the urge for date night hits, they pull out a film projector and watch a movie on the perfectly screen-sized wall that separates the living room from the galley kitchen. The wall is better referred to as a partition, since it stops a couple feet short of the ceiling—one of the masterful tricks the architect devised to create the sense of unfettering that inspires the home’s design.

This top space is filled with a transparent glass in the master bedroom, which further incorporates a see-through sensibility via louvered, sliding doors. “You see all through the house at all times,” explains David. “That’s the idea. It offers some protection but doesn’t make you feel closed in.”

Another extraordinary nod to this constraint-free intention: the kitchen countertop appears to float untethered to the cabinets, denoting a sense of buoyancy.

In cahoots with the landscape and architecture, a third factor renders all visitors ebullient. A serious art enthusiast who has long had a penchant for color and luminescence, David brought to the interior a dazzling collection of paintings, objects, and furnishings, placed to ignite a relationship between the environment and the people lucky enough to enjoy this setting.

While the artists represented here, including Stephen Mueller, Carl Palazzolo, and Elizabeth Dworkin, are heavy hitters, the works themselves are joyous and light, as befits a getaway home. Adorning the passageway between master bedroom and bathroom is a vivid beach bucket—James Rosenquist’s A Pale Angel’s Halo (1973). Even more heavenly is an 18th-century Italian carved-wood angel, poised eight feet up in the master bathroom and visible through the bedroom’s crown of glass.

A different kind of “see and be seen” headdress distinguishes the main sitting area. A line of 1920s and ’30s prints by Lartigue is delightful, not only in its stylish presentation of the famous French photographer’s subjects, but because each has great personal meaning to Carol, as Lartigue shot her years ago when she was a fashion model.

Vintage black-and-white images also imbue the guest bathroom with star treatment, thanks to the international array of celebrities photographed by Edward Quinn on the Côte d’Azur that embellishes the turquoise walls. Elsewhere, standing ever-ready for a spotlight of its own, is a menagerie of beautifully detailed insects, shells, and sea creatures—glass figures that, when the sun hits their locus, can suddenly appear lit from within.

Such luminosity is one of the thrills that accompanies living in the midst of a mercurial aesthetic, which is constantly being redefined by the weather, season, and time of day. The Rawles say that their favorite occupation is to be quite silent and still and to “ride the light through the house all day,” enjoying the shifts in hue and luster.

“This house,” says David, “is all about lightness and being.”