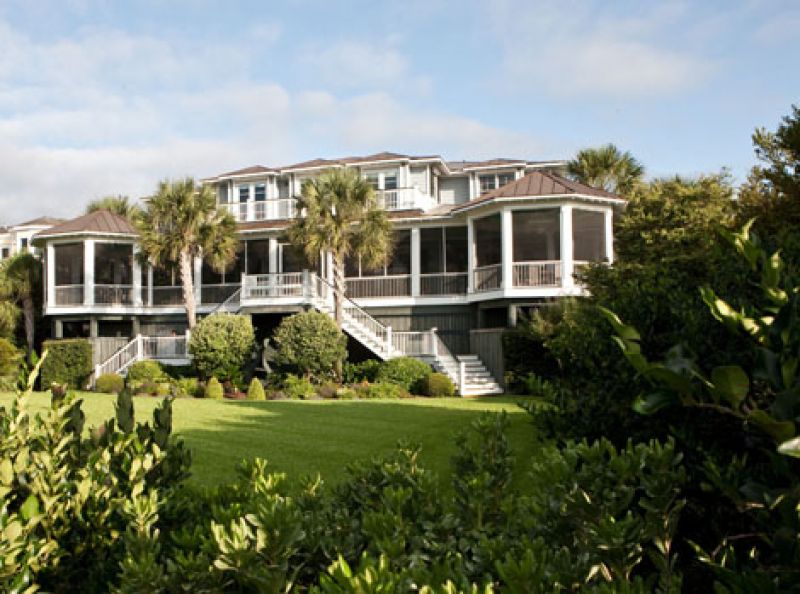 Looking vibrant in a peppy ensemble of sherbet orange and lime green, Tippy Stern Brickman settles into a white family room sofa that’s littered with tiny embroidered grasshoppers. Beyond her, open glass doors welcome the ocean breezes that first sweep across the Sullivan’s Island dunes then over a vast expanse of maritime forest, a tidy emerald lawn fringed in jewel-toned flowers, and last, up to her perch via a deep, deep porch. From her cushioned vantage, Tippy takes it in with an air of serenity, no matter that people bustle all around her.

Upstairs, her husband works in his home office. Downstairs a handyman swaps out huge canvases. (“We rotate our artwork about three or four times a year,” explains Tippy, former proprietress of downtown’s contemporary Tippy Stern Gallery.) And in the gameroom nearby, her son rehearses Hamlet with his drama teacher. As for Bessie, the typically ever-present, ever-energetic springer spaniel-cum-greeter? She’s at the doggie spa for a wash, rubdown, and fancying.

As action-packed as the house may be, it resonates with a mellow vibe—exactly what Tippy aimed for when she dreamed up this place back in 2000. But the road to the finish line at Station 26 was more than a little winding. The highlights? Tippy moved to the Lowcountry some 46 years ago, when her father, famous local philanthropist Ted Stern, was in the Navy. In time, he relocated the family to the College of Charleston’s president’s house, while he served as the school’s head for a decade. As a teen, Tippy headed off to boarding school but returned over the summers, and when she turned sweet 16, she met her husband-to-be, thanks to her still-local, still-best friend Amy Robinson. “It’s funny,” says Tippy now, “because we ended up living right here near the station where we met.”

After stints at the College of Charleston (hers), Harvard (his), and the University of South Carolina (both), the young newlyweds moved back to Charleston to be near both of their families. Over the years, their family grew to include two sons, and the foursome tested out homes downtown; in West Ashley; on the Isle of Palms, Seabrook, and Kiawah before settling into a 4,000-square-foot renovated warehouse on the peninsula while building this dream beach house out on Sullivan’s.

As for the latter, “I knew I wanted something that looked like Old Sullivan’s,” says Tippy. So she enlisted Chris Schmitt of Charleston’s Schmitt Walker Architects, who specializes in creating “old bones” looks with new construction. Tippy told him about her husband’s uncle’s rambling Sullivan’s Island home, how cozy it was, how all the kids and family hung out there. She also pointed out the Simmons’ house, a porch-wrapped abode on the island’s northern half and that she loved its rounded end-cap porches. She gave him a short list of prerequisites, too: Maximize the views; play up the glorious island light; marry indoor and outdoor living with deep, ample porches; don’t use a speck of drywall in the place; give generous wall space for artwork; fashion a “hers” master bath that forms a one-room getaway; and let the guest bedrooms have their own entrances outside so visitors can feel like they have private getaway suites.

While Chris designed the 6,500-square-foot, five-bedroom house, the Brickmans traded up lots. As Tippy puts it, “There was some buying, some selling, some trading, some house moving, some swapping, and everyone involved landed where they wanted.” The end result? They left a second-row spot and scored a beachfront lot at Station 26. There, Chris laid out a home whose front faces the ocean rather than the street. Not only is the orientation old-school Sullivan’s Island per Tippy’s predilection, it also affords more privacy on the immense porch and displays a less-showy street front.

And less-showy is the Brickmans’ specialty. “It’s a slipcover house,” explains Tippy. “We wanted it to be easy and calming, something that wasn’t fussy. We wanted our nephews and nieces to be able to play here, get sand on stuff, and not worry if things were spilled. I can throw the slipcovers into the wash, and I can stand on the furniture, like the dining room table, for example, when I need to put fish in the chandelier.”

Come again? Apparently the fish are a typical party-night touch: Tippy adds water and betas to the blown-glass votives in her family room chandelier. But such quirky entertainment is de rigueur here. The Brickmans—who moved into the home full-time when they realized they were spending more nights on Sullivan’s than downtown and when they kept moving artwork out this way—host their fair share of funky, festive fêtes.

For starters, her sister-in-law summers across the street, and the junior Brickman generation has always rotated from Mom’s to Aunt’s houses day in and out. As a result, the back lawn has welcomed jump castles and ball games alike. And as for Tippy’s Shakespeare-spouting son? She hired a cast to accompany him and staged the Bard’s plays on the ample back porch, audience members compliments of the expansive extended Brickman clan.

This month, the agenda includes a private reception in honor of Myrtle Beach native Brian Rutenberg’s new exhibit at the Gibbes Museum. Tippy once represented him at her gallery, she explains, pointing out several of his colorful, earthy, forest-like pieces that hang in the great room. “He paints while listening to Glenn Gould, so I’ve hired someone to come and play my grandmother’s piano during the party,” she adds. And, yes, the doors and windows will be open, she says, ready to celebrate another breezy beach day.