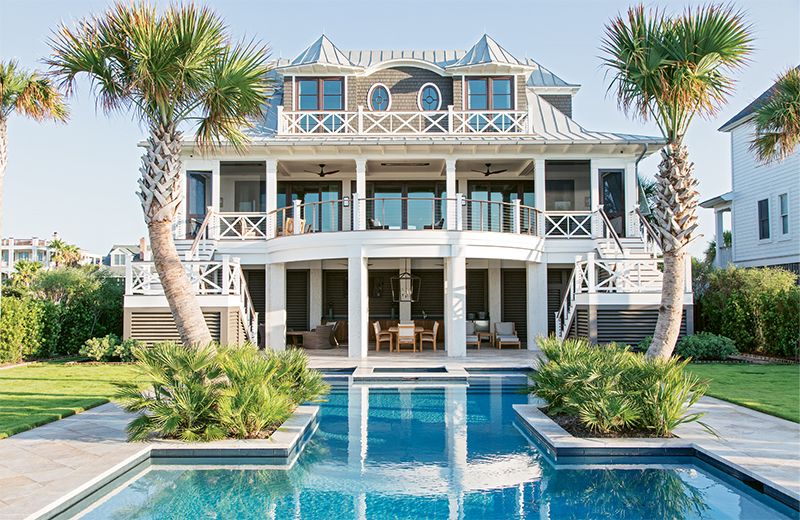 On an idyllic stretch of shore near the southern end of Isle of Palms stands a stunning symmetrical abode with an architecture style that tips its hat to both Lowcountry and Caribbean traditions—a winning combination that, for homeowners Mike and Mary Lamach, provides the ideal backdrop for relaxing at the beach in the company of family and friends.

The 4,700-square-foot, five-bedroom vacation home, complete with a bunk room, was made for entertaining large groups: the expandable kitchen table can seat up to 14 people, and the living room, which adjoins the kitchen, accommodates more than a dozen around two conversation-height coffee tables that can do double duty for casual dining. Outside, a covered patio with an alfresco kitchen offers seating for another dozen or so guests; beyond that, a large I-shaped pool beckons.

For Mike, a manufacturing exec, and Mary, a retired school teacher, more is definitely merrier: the Michigan natives feel most at home here reconnecting with their three grown sons, Nicholas, Jaime, and Michael—and Michael’s wife, Nicole—or hosting a group of extended family and friends from the Midwest. And the house should fit their needs for many years to come: thanks to smart additions like the bunk room, which sleeps four and offers his-and-her en suite baths, there’s plenty of room for future grandchildren, grandnieces, and grandnephews. “We thought about where we might be in five and 10 years and designed with that in mind, so everyone will still be comfy,” Mary says.

They’re perfectly comfy today, too, especially on holidays, like the Fourth of July, when they love to host a big bash. Mike might fire up the Big Green Egg to turn out ribs or beef tenderloin; Mary might whip up coleslaw and baked beans to serve along with it. With country music piping through the wireless sound system; close family and friends milling about; and their boat, Hail Mary, bobbing in the water nearby, the Charlotte-based couple couldn’t ask for a better home-away-from-home—just a three-and-a-half-hour drive from their primary residence on Lake Norman.

But when the duo first set out to build a getaway on the water, they pointed their rudders even further south. While site-scouting in the Bahamas, they fell for a beachy structure that epitomized the relaxed vibe they craved in a second home. “We wanted it to feel bohemian in style—not like an opulent residence, but more like a country house,” Mary says. “I saw a building with a metal roof and wood shingles, and I said to Mike: ‘That’s exactly what a beach house should look like!’”

Though deeply charmed by the Caribbean, Mike and Mary ultimately decided they’d prefer a place closer to home. At a friend’s urging, they checked out Isle of Palms and immediately recognized it as the right fit. “We love the beach, we love that we can ride our bikes and that it’s family-oriented and accessible to Charleston,” says Mary. “If we want to go to dinner on Sullivan’s Island or pick something up at the grocery store, we can take our golf carts. It feels like a very wholesome, all-American small town.”

When Mike and Mary bought the waterfront lot, they set out to meld their love of Caribbean-style architecture with an aesthetic that felt more at home in the South. They tapped architect Steve Herlong and North Carolina-based interior designer David Smith, who also outfitted their primary residence, to help bring their vision to life.

For Herlong, who has an office on Sullivan’s Island and has worked throughout the Caribbean, it was natural to merge the aesthetics of the two regions. “The style of architecture in the colonial Southeast was influenced by the same settlers coming from the Bahamas and surrounding islands,” he notes. “In this house, you see a strong sense of order and symmetry, which is typical of British colonial architecture.”

Mirroring design elements—such as twin dormers, a front entrance with a double-sided staircase, and a symmetrical I-shaped pool flanked by parallel palmettos and native plants selected by landscape architect Sheila Wertimer—lend the abode a classical sensibility that reflects this heritage.

But the home’s formal elements are tempered by “organic and relaxed materials, like those locally available in the islands,” Herlong says. In that vein, elements such as a zinc-coated copper roof and cedar shingles keep things grounded and strengthen the house’s connection with the natural landscape.

Inside, that landscape is the driving force behind the interior design. When guests first step into the foyer, they’re greeted with a direct shot to the back of the house, where a floor-to-ceiling windows provide an ocean view. To the right, above the stairs, a dramatic oval skylight lets in a slice of coastal sky. Interior designer David Smith, who also runs a retail shop in Cornelius, North Carolina, says these views set the tone for the rest of the project. “You walk into that space and immediately see the ocean—sky, water, sand, greenery, all of it—and that’s going to inspire.”

Building on that coastal connection, pecky cypress wraps the bunk-room walls, and sun-bleached salvaged beams, hewn into rafters and decorative brackets, add warmth to the living room and kitchen. “The cypress juxtaposes beautifully with the order and symmetry of the home, giving it a more relaxed feel,” Herlong notes. “It’s also a nod to the traditional Caribbean vibe, where natural rough-hewn wood was frequently used because of its ready availability and its natural rot and bug resistance.”

When selecting paint colors, furnishings, and textiles, Smith paired those warm wood accents with a soft coastal palette—think white linen Verellen sofas in the living room, white leather Lee Industries dining chairs in the kitchen, and a white Angora rug in the foyer. A few pops of color, like a Hickory Chair seat covered in a blue Moroccan-influenced fabric in the living room and a Trowbridge Gallery print in a guest room, add visual interest without straying from the theme.

The resulting space is soothing for the Lamachs’ frequent guests, and for the couple themselves. “Our lives in Charlotte are quite hectic,” Mary says. “When we come here, it’s nice to have time to decompress, catch our breath, and go at an easy pace.”