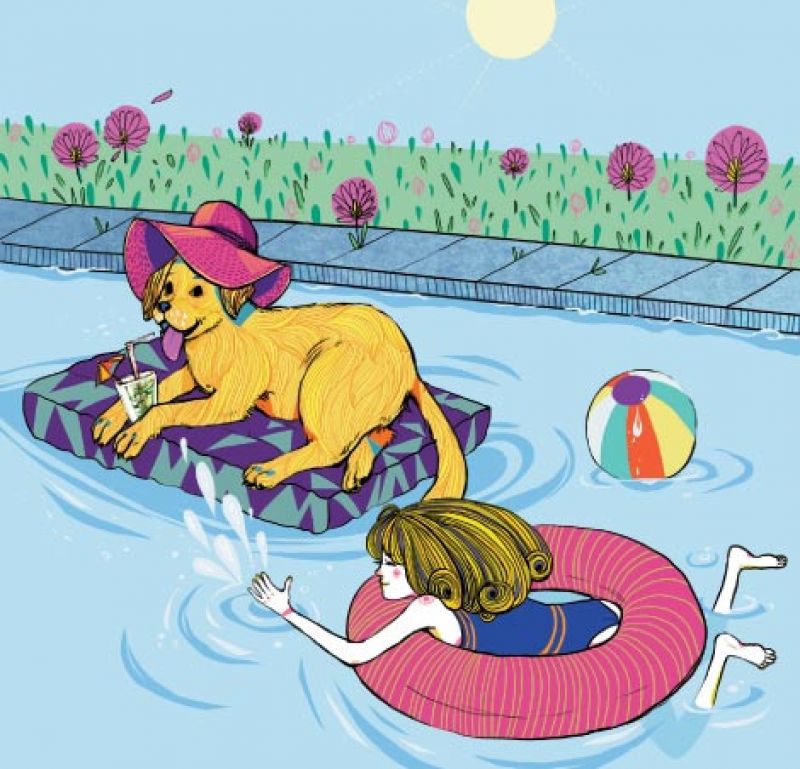 I knew George was the one the minute I set eyes on him. Sure, he was a little portly. And yes, he could have used a bath and a teensy bit of grooming, but at that very moment I knew there was no turning back. Within minutes, the 10-pound ball of wrinkly Labrador goodness was seated on my lap for the drive to his new home in Charleston.

Fast forward three years, and George has proved to be a charming addition to the family. There have been many lessons since we met on that farm in North Carolina. I’ve taught him how to sit, stay, and mind his manners, although on occasion I still catch him attempting to steal dessert from the kitchen counter. In return, he has taught me his fair share of lessons, including how to properly enjoy the sultry Lowcountry summers.

Before George came into the picture, I spent most of the steamy season cozied up with the AC. Now, I can’t even imagine staying indoors all day. George’s playful, let’s-get-out-and-soak-it-all-up approach starts early each morning, well before my alarm buzzes. In fact, I’ve abandoned the alarm altogether as, like clockwork, I’m awakened at 6 a.m. by his unwavering stare. If that doesn’t work, then it’s what I like to call his “gasping-for-breath” maneuver, whereby my now 80-pound sidekick stands on my chest until I’m forced to throw off my sheets and hit the ground running.

I’ve learned that there’s a method to George’s madness: waking up before the crowd and extreme heat has its advantages. In the relative cool of the morning without the distractions of cars, bikes, and wily skateboarders, we head towards the Battery by way of the college and have seen everything from early morning joggers to walk-of-shamers (my personal favorite).

George, himself, isn’t much good for jogging. All it took was one trip over a cobblestone from his I-need-to-pee-right-here-or-else stance for me to trade my brisk power-walks with my iPod for a slow mosey to the musical stylings of the street sweeper and city birds. Maybe he was trying to open my eyes to the wonderful world of meandering, where you forget about your goals and go—in George’s case—wherever your nose leads you.

Most Saturdays, we make it as far as the farmers market—a particular favorite of my epicurious pooch. I’m convinced he puts a “game face” on just as his paws hit Marion Square. Before I can even reach the tomato stand, George is consumed with belly rubs and treats from friendly strangers. And thanks to our delicious local talent, he’s developed quite the palate. I suppose that happens when one of your first tastes in life is a lick of bourbon peach ice cream.

After lunch, George’s saunter turns to a standstill. Midday frolics? He wants no part. He’d rather take a nap, thank you very much. While shady spots under the oaks have proved tolerable, it’s belly down in the middle of the kitchen floor that George prefers. And I must admit I’ve sprawled out beside him a time or two myself.

After a midday siesta, George awakes refreshed and looks to me for the afternoon’s entertainment. I thought throwing a tennis ball would cure those restless hours, but George is the only Labrador in America who disapproves of the game fetch. His hobby of choice? Swimming. From an impromptu dip in a trough on John’s Island to a few sneaky laps around the neighbor’s pool, George has personally tested most every body of water in the county. His verdict? They’re all worthy of a dog paddle.

When it comes to Lowcountry summers, I’ve decided to follow George’s lead. I’ll wake up early, nap later, and play hard in between. And when the heat becomes too unbearable? I’ll find a cool spot, plop down, and know that sometimes it’s best to just sit a spell with the ones you love.