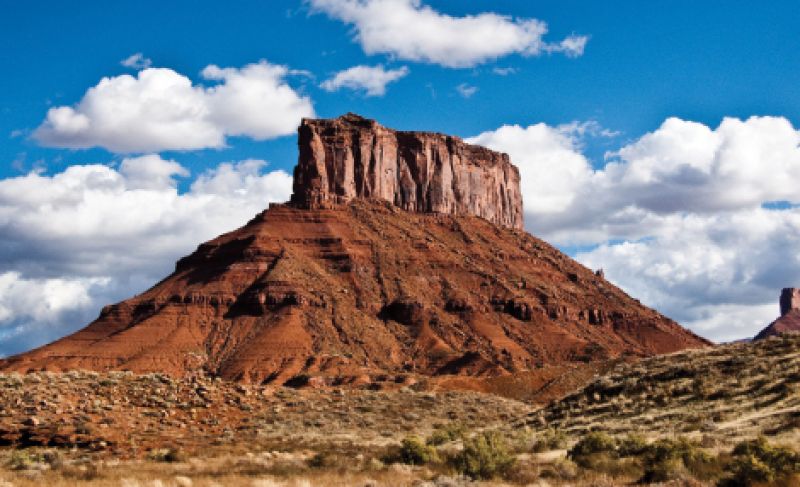 It’s October, and snow has already dusted the mountain peaks around Salt Lake City, where our flight lands just after lunchtime. We immediately hit the road by van as we’re racing to make as much of the 240-mile drive to the southern Utah town of Moab as possible before dark. This trip is all about western adventure, and we’re already on our first. At elevations 4,000-plus feet above the Charleston peninsula, we’re a long way from the Lowcountry in every way.

For months, I’d been looking forward to this week in the oversize landscape of Road Runner cartoons. But no matter how many times you go from the South to the mountain West, there’s always that initial jolt upon witnessing mile after mile of larger-than-life views. Starting from the outskirts of Salt Lake, as far as I can see in every direction are flatlands, as well as plateaus and towering ridges of rock. The state is definitely playing its dinosaur card. As we travel on Highway 191, we’re soon passing signs for dinosaur attractions, dinosaur byways, and Jurassic-era fossil trails.

Our driver and guide for this trip, Clayton Scrivner, clearly knows the lay of the land, and our conversation doesn’t stray far from the raw scenery and how to play in it. A 30-something with a mischievous grin, he’s telling stories of off-the-groomed-trails snowboarding, mountain-bike treks, and multi-day raft trips on unpopulated stretches of white water. He knows our destination of Moab (population 5,000) pretty well, along with favorite spots in the parklands that surround it, including the famed Arches and Canyonlands national parks. We soon realize that getting to Moab before dark is looking unlikely, and Scrivner asks if we’d like to stop about 30 miles from town to catch the sunset at Dead Horse Point State Park. “It’s worth it,” he says. We make the detour.

Driving up a two-lane road to about 6,000 feet elevation, we park at a near-empty lot and visitors center. The sun is falling fast and casting glows of orange, gold, and even purple on balancing rocks that tower upward here and there. I get out of the van and immediately feel the chill in the air. Pulling up the zipper on my jacket, I follow the path to the overlook. It’s a view we’ve all seen before—in movies and TV commercials and likely in our imaginations. The name “Dead Horse” is the stuff of a hazy legend of horses trapped on the narrow end of a plateau, 2,000 feet above a horseshoe-shaped bend in the Colorado River. Looking out, down, and up, what I notice most is the nearly impossible quiet. I can’t hear anything of the rust-brown water in the winding river so far below. As the sky darkens, the temperatures drop across the huge expanse. The silence is tremendous on my first sunset in Utah, and I feel small to the world.

Well past sundown and after dinners of cowboy-hearty beef soup and wild salmon upstairs at the Sorrel River Ranch a few miles outside of Moab, we check into a cabin at the next ranch over, the Red Cliffs Lodge. The sky has turned a deep black, and we’re tired from the day of travel (the connecting flights total about six hours), so it isn’t until the next morning that I realize just where we’d slept.

The legendary Colorado River I’d spied from such heights the night before? It’s now swirling by, just a few dozen yards beyond the back porch of my cabin and a line of 29 more beside the large main lodge. On the opposite riverbank, a wall of red cliffs rises straight up. The river level is low—I can see that, and later hear people talking of it—and I spend part of the morning watching some poor devil kayaking the same patch of white water over and over again. He continually gets hung up on rocks in the shallows, pulls himself and the boat ashore, and walks back a ways to try again. At breakfast in the lodge, we learn that the guided white-water rafting trip we’d booked is canceled because of the conditions.

No matter, I’d already seen pastures of horses on the walk from the cabin to the lodge, so we decide to mosey along the fence lines toward the stables. A group ride is about to start, and soon we’re matched with horses and Western saddles and invited to borrow cowboy hats and bandanas. My ride, Pinky, is gentle and pony-size, and I follow just a few horses behind the guide, Melissa, a tall blonde in leather chaps on a gray horse named Mr. Jones. (Later in the ride, she’ll stand easily on his back.)

We ride for a few hours along a creek, through narrow ravines, and past posts still bearing bits of hardware from when they were hung with telegraph wires. The ascents and descents are sometimes steep and rocky, the kind of ride you know you’re going to feel later in your hip bones. Back at the barn, I hop off aware that I’ll have a Western saddle swagger for the rest of the day. After a bowl of hot chili for lunch, I ease downstairs to the basement of the Red Cliffs Lodge to check out the display rooms and cases of memorabilia from dozens of movies and films shot in the area, including the 1950 classic Western Rio Grande with John Wayne, Thelma and Louise, and a Bon Jovi video. Obviously, directors love to put this landscape on the big screen.

At dinner that night, we meet Colin Fryer, a real cowboy in a well-faded denim shirt, blue jeans, and a crisp cowboy hat. The owner of Red Cliffs Lodge, he explains that he stopped driving cattle so he can focus on the place, which he’s built over the past decade. (One of his favorite movies shot in Moab? The 1964 Western epic Cheyenne Autumn.) Fryer has a coolness that reminds me of Peter Fonda, and when we sit for dinner, he orders bottles of wine for the table from the ranch’s own Castle Creek Winery and tells the unlikely story of how he got started in business by selling eight-track tapes, black-light posters, and car stereos out of a van in Salt Lake City.

The next morning, our guide, Scrivner, makes sure we’re up early for a hike to Delicate Arch in Arches National Park. Just before the entrance, I spot a single Airstream camper parked with its shiny metal glinting at the base of a tall brick-red ridge. During the few miles to the trailhead, we pass seemingly endless rust-colored rocks in the morning light, some precariously balanced on narrow spires. A mass of towering, spiky rocks in the distance resemble tall flames licking the sky. Our early start seems to have worked. We see only two other people on the way out into the wind-sculpted, water-eroded wilds. The hike’s a mere three miles round trip, but takes two hours with about 500 feet of elevation gain and the final portion on narrow ledges.

At the arch itself, I am stunned by the scenery: my eyes and mind almost can’t process everything. For about 10 minutes we are the only people there, stepping carefully out to the tremendous arch and the amphitheater-like rock features that surround it. At one point, the caw-caw of a single, circling raven is the only sound besides wind. On our return, we pass what must be a busload of students from Oxford University, followed by a group of trekkers with telescoping walking sticks. We hike back to the parking lot and make the short drive to downtown Moab, past the old uranium and potash mines and the rafting outfitters and vendors selling fresh pine nuts from the back of pickup trucks.

That afternoon at Solfun, a mountain-bike tour company, we meet Allan Poertner, who explains that he founded the outfitter in Denver in 2000. Then, on a trip to southern Utah a few years later, he and his wife decided to open in Moab, too, “because the scenery blew us away,” he says. We’re soon pedaling on slickrock and wheeling past cacti while Poertner reminds everyone of safety and techniques—and keeps us laughing. The surface of the plateau in the Merrimac Butte area north of Moab looks like Mars, and while he leads, Poertner tells stories of crazy wipeouts and even guide jokes such as, “What do you call a snowboard instructor who just broke up with his girlfriend?… Homeless.”

Return to the Horse

That night, after our double-adventure day, we tuck in at the Best Western Canyonlands Inn in the very center of Moab’s frontier-style downtown. The main street is lined with roadhouse bars, cafés, a couple of bookstores, gift shops (think: turquoise jewelry), and art galleries. There’s an Asheville-like quality to the place, except it’s even more outdoors-focused, with most everyone in gear—backpacks, hiking shoes, NorthFace jackets—for some sort of adventure. The town is our base over the next few days, and we stop for meals at the funky Eklectica Café and on the patio at Miguel’s Baja Grill and get bag lunches to go from the busy Love Muffin Café, where the staff T-shirts read, “Not too tough for The Muff.” We catch an airboat ride down the Colorado (in lieu of low-water rafting) and look up at the canyon walls from the water, watch dozens of “crack climbers” scaling the craggy rock faces in the Indian Creek Recreation Area, and have a picnic under the twisted branches of scrub pine trees at Elephant Hill in Canyonlands.

Before leaving Utah, we decide to take in one more view of Dead Horse, this time in mid-morning. When we get there, a film crew is setting up. I see people jogging back and forth between the parking lot and a makeshift staging area on a cliff ledge. When I ask what’s up, one of the crew says the shots will be for a Swedish diaper commercial. (No kidding.) Still it’s only a minor distraction—the cords and cameras can’t take away the amazing view. We’re all just specks in the realm of the vast scenery. I look from horizon to horizon and breathe it in.

And on the drive out, I get one more, much smaller, glimpse of Utah. We’re in the van on an access road from Dead Horse by then, when five or six mule deer emerge from the brush and step past. Ears up, they stop for a few seconds on the pavement, so near that I can see their alert doe eyes. Everything is perfectly still until one deer blinks its thick lashes. Then, just like that, they’re off.