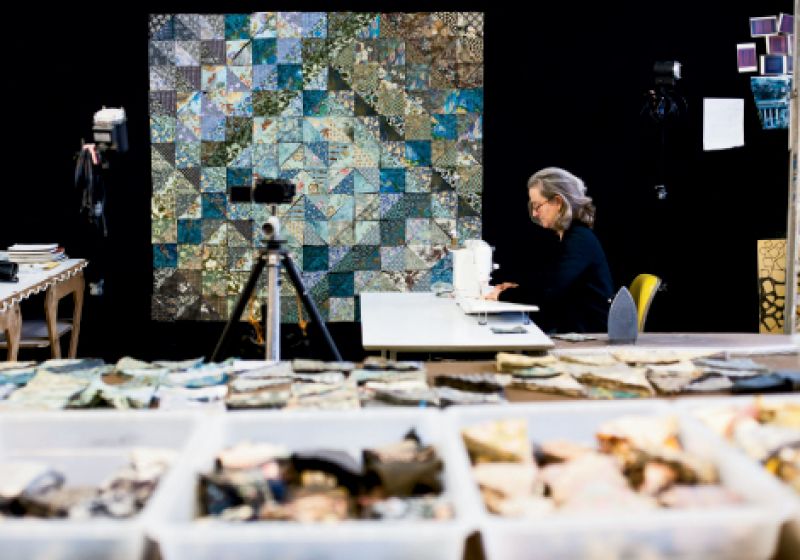 I can’t say that everyone in Asheville can name at least a handful of their favorite local artists, but on a recent spring weekend there, several people I met could easily rattle off more than a few. Interestingly, most also had ready answers for which beer they order when they sit among the welded metal sculptures on the patio at Wedge Brewing Company. (The citrus-hinted Iron Rail IPA was mentioned most.) That’s the kind of city Asheville is, a place where many of life’s pleasures—beer included—are handcrafted. Everyone seems to be making something.

After the four-and-a-half-hour drive from Charleston, we’d start our visit in the River Arts District in view of the Wedge (which also houses wood-fired pottery studios, of course). Hungry from the drive, we stopped first in Clingman Café, a lively place with local art on the walls, a busy kitchen, and a refrigerator case of fresh food. I ordered a tuna salad plate and soup and happened to be served by the owner, Tripp Howell, who moved to Asheville from Los Angeles. (And before that, in the 1980s, he said he worked at Charleston’s own Henry’s.)

Howell picked up one of the River Arts District maps that he keeps on the counter and started circling must-see studios. He talked about the beautiful and impressive art now being made in the neighborhood, giving new vitality to the blocks of defunct mills and warehouses on the French Broad River. “Art is all about contrasts,” he said. “That’s what we have here—and without pretense.”

He’s right about the lack of formality. Designer Pattiy Torno was deep into piecing a quilt when she warmly welcomed us to her space in the Curve Studios. She answered questions and showed what she was sewing, and soon we were talking of the dyes used in the best print fabrics and of the disappearance of American sources for cotton thread. I dug her shop, a lot. Besides quilts, Torno has been designing and making clothes for more than 30 years. The fabrics were soft and flowing, and I ended up trying on and buying a top and skirt she’d made. Meanwhile, in an adjoining, high-ceilinged studio, Barb Butler was weaving the most delicate and beautiful silk scarves on a loom. We got to talking, too, and she told me she named her studio “Sutherland,” after her Irish grandmother and that she teaches weaving classes, including a one-day workshop for beginners.

Our next stop was for that beer at the Wedge, which was spilling over with people eating roasted peanuts and sipping gold and amber brews. It was early evening, and I don’t know if it was the laid-back atmosphere, the beer, or the gentle rocking of the occasional train rambling past, but the whole scene was making me sleepy. So we headed downtown for some energy, and as soon as we parked, we could hear the Friday night drumming circle. The rhythm drew us in, and I was instantly revived.

We walked over to Pritchard Park, where a dozen or so guys with drums of all sizes beat out a pounding, freestyle set. People danced on the brick walkways, many of them barefoot, or sat on the low walls of the circular space. This is the groovy side of Asheville, and it reminded me of a similar scene in a San Francisco park a few years ago. At both, circles of young men and women stood kicking Hacky Sacks into the air.

Afterward, we wandered down to a new downtown restaurant/bar named Sazerac, where oversize nude sketches hang on the walls and classic cocktails—Sidecars and Negronis and French 75s—are served in heavy rocks glasses alongside a bevy of small plates. I tried the sliced duck breast with tiny local Brussels sprouts and thin sliced potatoes—excellent.

The next day, we’d check out another recent addition to the Asheville dining scene, the Red Stag Grill at the Grand Bohemian Hotel. During a visit to the galleries around Biltmore Village, it was hard to miss the tall Tudor-style building. The lobby—with its lavish interior of crystal chandeliers, stone floors, and velvet drapes—gallery, and restaurant are definitely worth seeing, and visitors are encouraged to check it all out. We walked into the Red Stag before it opened to look at the walls decorated with deer antlers and paintings of hunt scenes. An employee asked if we’d “like to see the red stag” and then pointed to the mounted vintage head of a red deer in one corner. The little fellow wasn’t much larger than a rabbit.

On the drive up to Asheville, I had called artist Julyan Davis, who lives in town but often shows work at Carolina Galleries in Charleston. He said he would be painting that Saturday by the French Broad River, up at Ledges Whitewater River Park on the Old Marshall Highway north of Asheville. So we went, and while the water rushed by, I watched him paint at his folding wooden easel in his self-described “subdued English palette” of khaki and plaid with a felted wool hat. The transplanted Englishman said he was drawn to the mountains to paint landscapes but thinks the city is still better known for pottery and other world-class crafts.

Davis offered to lead us to a favorite nearby place: the small, historic town of Marshall, just a few more miles up the winding riverside drive. There, we walked down Main Street and across a short bridge to the handsome, redbrick Marshall High Studios, where artists rent and work in the classrooms of the town’s former high school. It was a cool, well-renovated space, but sadly no artists were around that day, so we could only peek in the old classroom doors. (On “French Broad Fridays” in Marshall, stores, studios, and galleries are open from 5 to 9 p.m. on the second Friday evening of each month, June to November.)

Back in Asheville, we did some more exploring in the River Arts District, this time visiting The Potter’s Mark, where Eileen and Marty Black are known for their red-glazed pottery. (I bet they’re known for their humor, too—Marty was wearing a wry smile and a Potter’s Mark T-shirt with the question, “Need a little pot?”)

Later, we’d stop in at Blue Barnhouse in West Asheville, where owner Brandon Mise and his employees use four vintage letterpress machines—some electric and some hand- and foot-operated—to create custom print pieces. Visitors can watch them at the presses while shopping. I’m a big fan of letterpress and had the chance to meet Mise, who told me how he got started in printing from the writing side back in 2002. While studying for a master’s in literature in California, he got involved with the San Francisco Center for the Book.
It was yet another great conversation with a hands-on local, so easy to have in this mountain city where one thing leads to another, and pretty soon you have your own list of favorite Asheville artists. 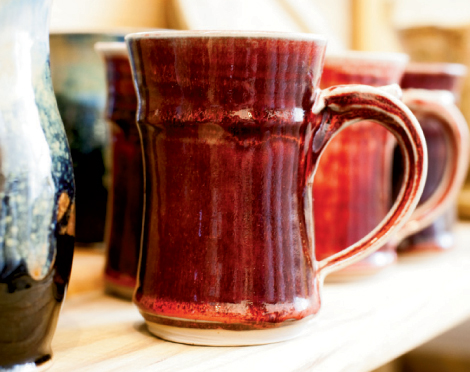 Do:
• Visit some of the art hot spots: Blue Spiral 1 and other downtown galleries; the Asheville Art Museum; the River Arts District; West Asheville studios and boutiques on Haywood Road; the Grovewood Gallery & Studios next to the Grove Park Inn.
• Go to an artist watering hole: Wedge Brewing Co. by the railroad tracks with pale ales, pilsners, wheat beers, and peanuts. 125-B Roberts St., River Arts District, (828) 505-2792, www.wedgebrewing.com
• Follow the French Broad River on a scenic drive to tiny Marshall, 18 miles northwest of town, and visit galleries and the artist studios at the old Marshall High School.
• Take a weaving class at Sutherland. 6 Riverside Dr., River Arts District, www.sutherlandhandweavingstudio.blogspot.com