A French New Year’s Brunch
December 2008
Artist and consummate entertainer Christophe Drumain welcomes family and friends to New Year’s Day brunch in his Riverland Terrace garden, complete with all the fixings from his native France 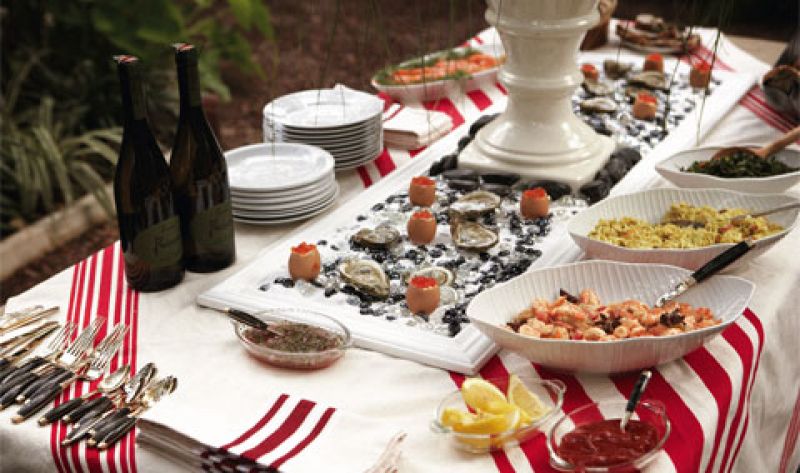 Artist and consummate entertainer Christophe Drumain welcomes family and friends to New Year’s Day brunch in his Riverland Terrace garden, complete with all the fixings from his native France{Menu} Caviar-Stuffed Eggs Saffron Shrimp & Assorted Salads Venison, Duck, and Rabbit Pâtés Selection of Stuffed Dates & Prunes Convincing Christophe Drumain that “there’s nothing to eat” is a difficult task. Just ask his friends, who claim he can whip something up from even the most barren refrigerator.  “My clients laugh because I’ll design their yards and end up cooking for them,” says the French-born Christophe. “I enjoy food, but even more so, I enjoy the sense of family that comes with cooking.”   And it’s no wonder: the Bordeaux School of Architecture graduate grew up helping his mother organize dinner parties. “My father was in the French army, so we would often host parties with military officials, including some of the generals. This taught me that it’s so important to know how to entertain, how to make people feel comfortable.”  Christophe happily carried these lessons with him to the States; following a post-graduate degree program at Harvard, for which he received a full scholarship, the architect-turned-landscape artist met Scott Parker, who had just opened master planning firm DesignWorks in Charleston. Now a partner in the company, Christophe has sketched out the details of thousands of exterior plans. As for his own Riverland Terrace backyard? In recent years, it’s become a palette for artistry of all kinds.  “In Charleston, you can use your garden year-round, so you want to design a space that you can spend as much time in as possible,” says Christophe. For him, that means forgoing a traditional lawn in favor of pavers, glass, and painted concrete. “I don’t really have the time to clip or trim,” he says. That’s not to say the James Island resident isn’t willing to put in a little elbow grease—it’s just that artistic projects like garden murals are more his speed.  “I painted a koi pond onto a concrete slab using alkaline outdoor paint,” he says of the rectangular garden alcove that formerly served as a parking space. “I had always wanted a real koi pond, but as a landscape designer, I know how much they cost and how hard they are to maintain.” So Christophe decided to paint what he couldn’t install. A nearby water-jug fountain “feeds” the faux pond, while a generous selection of papyrus and water plants, most salvaged from friends’ yards, completes the illusion.  But again, Christophe’s garden artistry is only part of the story. With his mom and entertaining mentor, Catherine, visiting from France—her first trip to the United States since Christophe’s Harvard graduation—with his aunt, Micheline, Christophe readied his back garden for a festive New Year’s Day brunch. The trio combined their traditional French flavors with his friends’ offerings to create a feast of pâtés, dried fruits, and even a vegan Yule log. “It’s about a great diversity of food eaten in only small amounts,” he says, pointing to his friend Ken Immer of vegan culinary outfit OM Cooking. “I could take on everything on my own, but Ken is educated in French cooking, so he mixes his good, raw foods with these cooking methods. It’s all about the exchange of talent and ideas.”  Christophe notes too that as large a role as food always plays, it’s never the main event. “The French love to feed people,” he says, “but it’s really about the social element that goes with it. You never remember what you wore or even what you ate, but you remember the experience forever. The best laugh I ever had was in the kitchen with my aunt and my mother. We were dropping dishes and falling on the floor laughing,” he says, “That’s what I’ll remember most, and that’s why you remember the way food smelled as a child for the rest of your life.”  In France, explains Christophe, you can tell that people are from the same family when they sing the same tunes and cook the same recipes. “Food links me to my roots,” explains Christophe. “It’s the roots of who you are. You may lose a language, but you never lose those ties to family and food, and it’s an amazing experience to share that with friends.”