The Iron Man
July 2016
WRITER:
Bridget Venatta
PHOTOGRAPHER:
Ruta Elvikyte
Robert Thomas is on a mission to bring the ancient art of blacksmithing into the 21st century. Just don’t ask him if he shoes horses

In his North Charleston studio, Robert Thomas is performing alchemy: with a blow-torch, he heats the tip of a long piece of steel until it glows like molten lava. “Now I can mold it like clay,” he says. Using an anvil, power hammer, and a few other old-school tools, he might bend the material into a coffee-table leg or a decorative element for a gate. Given his mastery of the craft—he’s won international blacksmithing competitions and studied with pros all over the globe—the possibilities seem endless. Having worked in business development for a bank, he draws on know-how from his first career to run his current ventures: metalwork practice Robert Thomas Iron Design and Forged, a line of hand-crafted metal furnishings and hardware. Here, he fills us in.

CM: How’d you become a blacksmith?
RT::
I went to school for marketing finance, then worked at a bank, and I just hated it. After the economy crashed, I bailed. I was tired of moving paper around; I wanted to do something tangible.

CM: Were you nervous about that leap?
RT:
My mom is a full-time working artist, so I grew up seeing art as a viable career.

CM: What was your training like?
RT:
I went to the National School of Blacksmithing in England—one of the oldest blacksmithing schools in the world. It’s like the Harvard or Yale of metalwork.

CM: Why did you come to the Holy City?
RT:
Charleston is known for its ironwork; the locals just get it. In other cities, when I tell people what I do, they tilt their heads and ask if I shoe horses or work as a reenactor. Here, people say: “Oh, you’re like Philip Simmons.”

CM: Tell us about your recent work.
RT: We’re doing all the ironwork for the Courier Square project, including two sets of gates with a beautiful pineapple motif. And I recently did custom grilles and fire baskets for Wise-Buck Smoked Meats on Ann Street.

CM: Do you use modern technology at all?
RT: I’m not a Luddite—to scale up production, I’ve modernized everything but the fire and hammering of metal. I use web-based time-management systems and digitized drawings; I prototype with 3-D models that allow me to perfect designs down to the millimeter before I forge.

CM: Why’d you launch Forged?
RT:
My custom designs are usually for the ultra-wealthy; I wanted to make ironwork more accessible. All people should be able to have an heirloom, something their grandkids’ grandkids can have.

Lives: In West Ashley with his wife, Natalie, and their ”goldador” pup, Izzy

Résumé highlight: Earning a Journeyman’s Certification from the Worshipful Company of Blacksmiths in London, England

In his off-hours: ”With our first baby on the way, any free time I have is spent prepping for life as a dad!”

Watch Thomas give a peek into his forging process: 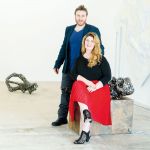 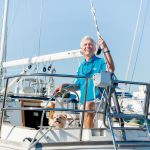 As he preps for his 16th Charleston Race Week, Dr. Ken King talks to us about the city’s booming sailing scene, his devotion to the sea, and what the heck “starboard” means