After her run to the French Open quarterfinals last summer and a recent win over No. 4 seeded Simona Halep at the Australian Open, the hometown tennis phenom returns to take on Volvo Car Open 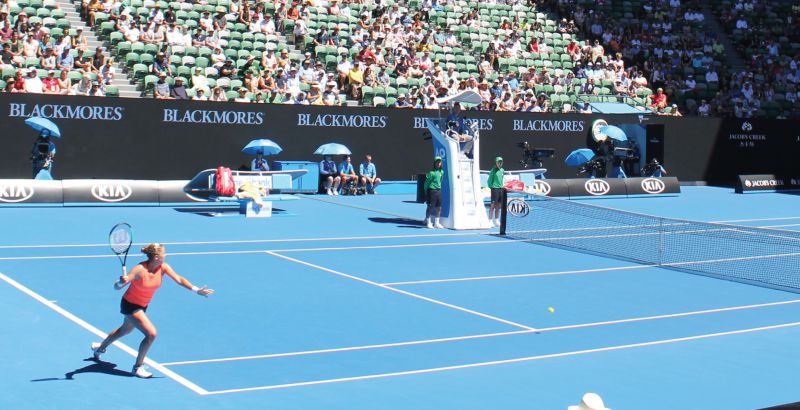 It’s one of those glorious Charleston winter days when it feels more like late spring—frisky birds are chirping, azaleas are budding, and biking and jogging trails are full, as are these public tennis courts by Daniel Island Elementary School, where third-graders on recess are running around the playground in full spring-fever throttle. But their shouts and laughter aren’t even registering on the focused Shelby Rogers. While an elderly couple hits soft, easy lobs on the court beside her, Rogers is dancing around the baseline, rocket-launching ground strokes that go whizzing over the net. Strong, steady, fast, precise.

“So, can Shelby just wipe you off the court?” I ask her hitting partner, Christian “Chip” Hand, a local professional tennis coach who also happens to be Rogers’s brother-in-law. “She took a set off me once,” Chip replies, and I’m thinking he’s just trash-talking. She blasts a wicked cross-court forehand in reply.

Let’s get the obvious out of the way: Shelby Rogers has killer charisma. She’s a Women’s Tennis Association (WTA) darling for good reason—the five-foot-nine blonde delivers charm like an overhead slam barreling straight at you. Start with that knockout smile—big and grinny and totally authentic. Add those bright ocean-blue eyes. Then gloss on the upbeat “all’s good; you got this” vibe she naturally emanates, and the combo is a sure ace.

Rogers’s wholesome, all-American appeal hasn’t gone unnoticed by the media, or by the hundreds of zoom lenses banked court side during major tournaments, or by her 11,000-plus Twitter followers. She’s photogenic, cheerful, approachable, articulate. But charisma alone hasn’t powered the 24-year-old Mount Pleasant native to the elite limelight of women’s professional tennis. Her unrelenting competitive instinct and fierce work ethic have.

See Shelby Rogers after qualifying for the quarterfinals of the French Open:

“Shelby’s the complete package,” her former coach, Bryan Minton of Daniel Island’s MWTennis Academy, confirms. As the one who helped hone Rogers’s dangerous backhand and deadly down-the-line forehand in her formative years (from age seven to 17), Minton knows what he’s talking about. But tennis aside, she’s nice to boot. “Oh, absolutely, and thoughtful too,” Minton says, recounting how she brought him back some red clay from the famed Roland Garros stadium in Paris, where Rogers reached the quarterfinals of the 2016 French Open. Of course, she is plenty nice and fun to be around, as long as you don’t have to return her 105-plus mph serve.

Rogers is indeed a fan favorite among the cadre of top women’s players at tournaments across the world these days. Now in her eighth year on the women’s tour, she’s maturing and finding not only her strokes but her stride. And she’s anticipating another strong season on the heels of her best year yet on the tour. In the first few weeks of 2017 alone, the No. 59-ranked Rogers upset No. 4 Simona Halep in the Australian Open, then hopped over to Taiwan for a tournament, and played on the USA’s Fed Cup team in Hawaii, to the delight of international audiences. But when she comes to Daniel Island this month to compete in the Volvo Car Open, she’s more than a world-ranked player; she’s the hometown girl. And as nice as it is to have your family and friends and all of Charleston cheering you on, “it’s also tough,” Rogers admits. “I don’t want to disappoint them.”

Playing to adoring crowds on Daniel Island is a welcome pressure for Rogers, who as a wee young player crouched court side during the Family Circle Cup (since renamed the Volvo Car Open) in ready ball-girl stance, running down missed balls and rolling them back to the likes of Jennifer Capriati and Steffi Graf, players she idolized. Capriati gave her a hug and a kiss once, perhaps bestowing a prescient blessing. In 2010, soon after Rogers turned pro, she walked on to a Family Circle Cup court as a 17-year-old competitor, not just a starry-eyed ball girl—a pinnacle moment. “The crowd that showed up to support me was unbelievable. Stepping on that club court and hearing everyone cheering for me was the greatest feeling I’ve ever had,” said Rogers in an interview. The same year, she won the 18s National Championship and was named the USTA’s Junior Girl Player of the Year. Walking out of the women’s locker room and almost running into Roger Federer in the hall at the US Open ranks as a high second, she notes.

Born and raised in Mount Pleasant, Rogers began playing tennis on her Snee Farm neighborhood courts at age four, thanks mostly to the fact that her sister, Sabra, four years her senior, played. “I wanted to be just like her,” says Rogers, who remains “super close” to her only sibling. Though neither her mother, Starley, nor stepfather, Jim Gabrish, are tennis players, there’s plenty of athleticism in the family. Gabrish was an All-American Citadel football player and Hall of Famer, who spent three years in the NFL with the Miami Dolphins and Cleveland Browns.

Sabra played varsity tennis at Bishop England High School, where she was captain of the team and in 2005 was named South Carolina’s High School Player of the Year and represented South Carolina on the Junior Fed Cup/Davis Cup team, and then went on to be an All-American tennis player at Emory University. Though Shelby certainly succeeded in emulating her sister’s tennis prowess, she followed a less traditional path, opting to focus on intensive training and junior circuit tournaments across the state rather than competing on her First Baptist high school team. And instead of college, she gambled on her dream of turning pro. In 2009 at age 17, Rogers left Charleston and headed to the USTA National Training Center in Boca Raton, Florida, to give it a go.

“That was always our goal,” says Coach Minton. “It was evident early on. I remember watching Shelby just crack a backhand when she was like nine years old and realizing, ‘Wow, hey, this kid has something really special.’ But what’s unique about Shelby is that she really wanted it. She was always very coachable, always wanted to learn, and she lived and breathed tennis,” Minton says.

Rogers’s gamble has paid off. She reached the quarterfinals in her very first event after turning pro and, between 2012 and 2014, won four event titles. In 2013, she earned wild-card entry to that year’s French Open, where she won her first-round match and her first-ever victory in a Grand Slam. In 2014, she was a nominee for the WTA Tour’s “most impressive newcomer” award, having jumped nearly 50 spots in her world rankings to reach No. 72 that year. Then came a disappointing, injury-besieged 2015, when Rogers was hampered by a torn MCL (medial collateral ligament) and never quite got her groove. She lost 17 first-round matches that season. “That’s tennis. More days than not you fail,” she says. “Only one person ends up winning a tournament.”

But Rogers feels stronger and healthier than ever now, especially after coming off her best season yet. Her 2016 highlights included toppling two-time Wimbledon champ Petra Kvitová at the French Open to reach her first career Grand Slam quarterfinal. “I had to keep reminding myself to play one point at a time and that this was just another tennis match,” says Rogers, then seeded No. 108 and up against the No. 10-seeded Kvitová. Rogers’s prize money from the 2016 French Open was $326,722.93, nearly half as much as she had previously earned cumulatively on tour.

Those close to Rogers are extremely proud, but not surprised by her success. “She was so determined and was always willing to sacrifice and do what it took,” Minton says.

Now six years in, what it takes is pro packing skills on top of everything else (i.e. mental toughness, robust fitness, that 105-mph serve). Rogers is on the go every few weeks, and her large duffle bag looks like it gets as much of a workout as she does. “It’s called being ‘on tour’ for a reason,” she laughs, digging into her duffle to pull out two tees—a navy-and-white striped one and a “USA” shirt—as photo shoot options, then casually turning aside to change into the stripes. No modesty, no pretension—welcome to the locker room.

But as glamorous as it may seem to jet set to matches in Australia, Taiwan, and Hawaii in a matter of three weeks, it’s not easy. “I try to take advantage of the incredible places I get to visit, but I can’t exactly go on a three-hour hike the day before a match,” says Rogers, whose home base, such as it is, is her apartment in Fort Lauderdale. Between travel, training, resting, and managing the increasingly busy business side of her career, there’s not a lot of downtime. When she does get to relax, Rogers loves watching movies (warning: she cries readily at comedies or good chick flicks); following ice hockey (she grew up going to Stingrays games and particularly loved cheering for Gomez, “the guy who always stirred things up,” and today is a huge Tampa Bay Lightning fan); and staying in touch with her Charleston friends, including Mallory Rourk, one of her pals since elementary school.

“Shelby is super laid-back and so funny,” says Rourk, who confesses to knowing next to nothing about tennis but loves watching her friend play, especially at the Volvo Car Open. “We grew up crabbing and going to the beach and just being goofy and active outside, enjoying the sunshine.” They still do, heading to Sullivan’s Island to hang out when Rogers comes home to visit. In middle school, the two collaborated on a school project about the Spanish island Mallorca, “and I said, ‘If you ever play tennis there, I want to go’,” Rourk recalls. So when Rogers was invited to play at that very locale in 2015, she sent Mallory a ticket as a college graduation gift. “That’s the kind of person she is—she remembers some little comment I made in middle school.”

Another comment Rogers remembers is one she kept telling herself as she progressed, round after round, in the French Open last summer, and as she overcame a much-higher seeded Halep in the Australian Open this year: “you belong here, you belong here, play your game.”

And Rogers, with her Charleston-bred charm and charisma, clearly does belong center court, playing against the top women in the world. “She’s proven she can beat the best of the best, and on any given day, she can,” says Hand. “Shelby’s grounded and level-headed, and her game’s always been there. Now she’s gained mental toughness and is learning more about herself.” Learning that, yes, she does belong—on courts at Grand Slam tournaments and specifically here in Charleston, where she feels most at home. Here, where in the broader Lowcountry tennis scene, many young future Shelby Rogerses are watching as she takes to the practice courts on Daniel Island, whizzing forehands and backhands back and forth with steely focus and impressive power, and realizing they too can aspire to one day belong.