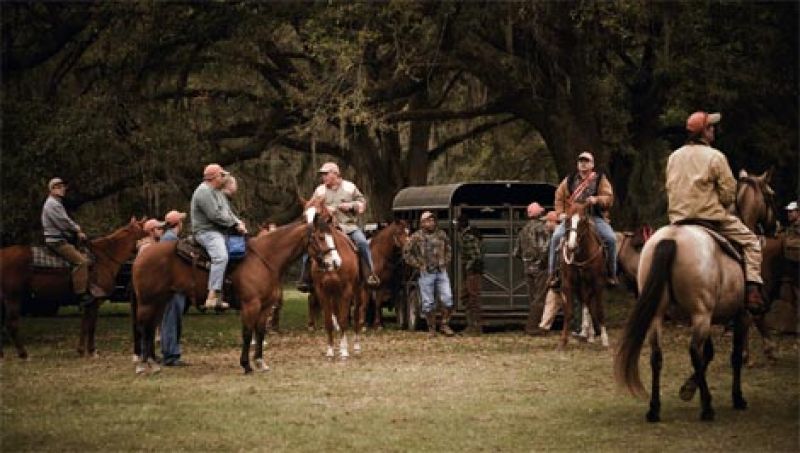 It’s just after sunup, and the horses, hunters, hounds, and handlers are saddled, strapped, collared, and eager to go. Chase dogs and catch dogs, radio collars attached, run circles around the clearing, their breathing excited, their paws drumming the earth. The horses, perhaps conserving their energy for what’s to come, move out with no more than a few snorts. More than a dozen riders ease into the forest behind even more dogs. An eerie quiet settles as the last horse disappears from view. Within an hour, the hounds pick up the scent of our quarry—the elusive and ill-tempered South Carolina wild hog—and begin to give chase. The party is propelled forward on the tails of the baying hounds, and the difficult terrain puts the mounted hunters to the test. Those of us following on four-wheelers hear over the radio that the dogs ran up on two hogs at the swamp’s edge, and the swine escaped in opposite directions, splitting the dogs and men. One of the hunters, brandishing a facial gash from a branch, plows out of the brush on his horse, trying to intercept the hounds. But the animals can no longer be heard. The hogs have evaded the group. In the wake of the adrenaline-pumping excitement, the pack slowly reassembles. Dogs break in and out of the woods, with lone riders giving chase. We wait and watch.

Working our way through the impressive landscape, I’m reminded of the abridged history lesson offered earlier by the hunt’s host, Bill Hanahan—avid outdoorsman, unofficial family historian, and great grandson of J. Ross Hanahan, who originally bought the Millbrook estate. “The property was purchased for mining phosphates and hunting,” Bill explains. “The ore left the quarry on a tramline, crossed the dirt road that is now 61, and was loaded onto barges on the Ashley River. Hunting outings were awarded to clients and top salesmen.” Since those days, the sport has been confined to hunt clubs—which help keep game populations in check and care for the property—and those possessing highly coveted personal invitations.

I’m here today because good fortune has handed me just such an opportunity. The price of my admission: to prepare a feast celebrating the tusked beast.

To make preparations for the dinner I’ve been charged with delivering this evening, I took some time earlier in the week to visit the 5,400-acre ancestral property of the Hanahan family. Down Highway 61, ancient oaks form a canopy over the two-lane road that sidles along the Ashley River past historic plantations that once used the vital waterway for commerce and agriculture.

The great plantations, including Drayton Hall, Magnolia, and Middleton Place, loom impressively on the route, which also served as the main artery for well-to-do Charlestonians traveling to summer homes amongst the pines of Summerville to avoid the oppressive heat on the peninsula.

Around a sharp bend, I arrived at the well-worn gated entrance and was met by Bill. We drove down a scenic three-mile dirt road leading to the Porter House, the 1920s residence now in the care of cousin Grayson and Bibbs Hanahan that was built on the site of the familial home. The family’s comfortable five-bedroom country home is imbued with the patina of casual elegance, its interior warmed as much by Hanahan history, family heirlooms, sepia-toned photographs, and artifacts from hunts past as it is by the grand fireplaces in the living and dining rooms. It’s at this welcome refuge from the city that friends and family met this morning to begin the hunt, and it’s where the great feast will bring our day to an end.

The dogs’ fevered baying snaps me from my thoughts—they have picked up another strong scent and again taken off. It’s late afternoon, and both riders and horses are tired, sweat-stained, and sore. But the party rallies and rushes toward the action, hunters galloping on horseback, four-wheelers close behind. The chase dogs close in on a 100-pound wild hog. When the sow takes a defensive position to make a stand, the catch dogs—two trained pit bulls—attach themselves to its neck. Melvin Deweese swings down from his mount and grabs the rear legs of the raging hog as if wielding a wheelbarrow, then quickly drives her to the turf before tying the defeated hog’s legs and snout and throwing the animal over Roy Graham’s saddle.

This is a tradition of man versus beast, of living off primordial land. Such a time-honored affair demands a grand dinner in return. During my prior visit, Bill put in my care a dressed boar from an earlier hunt that I have transformed into a number of dishes. The waning sun filters through Spanish moss hanging from an enormous ancient live oak in the yard, the setting for our supper. We light a campfire, start the wood in the oyster pit, and begin to assemble a buffet on the picnic table in the shadows of the twisted limbs.

Bill’s wife, Devon, helps oversee the process with an easy smile, simultaneously keeping track of their two boys and greeting guests. After putting up the horses and settling the dogs, the fellow sportsmen make their way over to the gathering. More friends have arrived at Millbrook from near and far and from all walks of life—some on private planes and others in pickups that have seen better days. Hunting and outdoor feasting are great equalizers.
I lay out wild boar prosciutto with

chunks of Parmigiano-Reggiano; plump boar sausages braised with grapes and onions in red wine and balsamic vinegar; a lasagna filled with rich ground boar meat slowly cooked with tomato, fresh herbs, and olive oil in the classic style of Bologna; and a whole roasted boar’s leg lacquered with truffle jam. Roasted oysters; a rustic panzanella salad made with crusty bread, fresh tomatoes, and mozzarella; and delicious tomato pies—a family favorite that Devon has somehow found time to prepare—round out the feast. But the Hanahan boys have their eyes fixed on the lemon cakes topped with vanilla-scented berries at the end of the buffet. “We typically just drag a steak across the grill after the hunt,” explains Bill, “and we don’t think about it too hard. But this is something special.”

The guests make their way past the candlelit table, piling their plates from the pork-centric platters. Everyone begins to eat, and for a moment, all I hear are the sounds of crickets and crackling wood. The diners nod and smile, and then the silence is broken with laughter and happy chatter—I believe I have done my job. And when the old-time hunters ask me how I made the braised boar sausages, I know for sure.

As the wine, beer, and single malt continue to flow, so do stories of hunts past. The campfire burns long after the candles flicker out on the buffet, and old friends and hunting companions tell tales into the night.