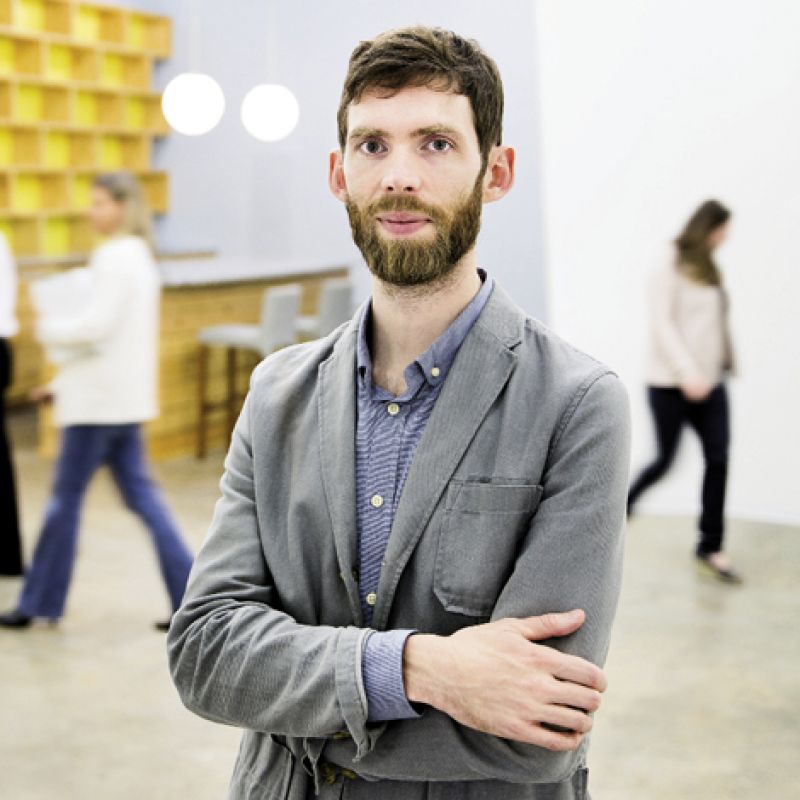 Don’t let his rural Georgia upbringing and laid-back niceness fool you. Jacob Lindsey is a city slicker—in the freshest, best sense of the word. Think Andy Griffith licking his thumb to slick back Opie’s hair, only maybe substitute Andrés Duany, the father of New Urbanism, or even Steve Jobs, for Andy. Think slick as in orderly, well-functioning, and wow. Think slick as in Apple products, or a classic racing bike—streamlined, elegant, neat-o. Trained as a landscape architect, Lindsey’s landscape of choice is the ever-undulating urban environment. Cities and how we live in them, build them, enhance or harm them are his obsession; their richly textured fabric and functionality, or lack thereof, his passion. “I think, eat, sleep, dream about cities and how to make them better,” says the 34-year-old unabashed design geek. As the new director of the City of Charleston’s Civic Design Center, Lindsey welcomes the challenge and opportunity to do just that, “and to be able to focus 100 percent on Charleston, to focus on the city I live in, which is great,” he says.

Art + Ecology
Ironically, Lindsey’s city-centric interests stem from growing up way out in the country, in Washington, Georgia (population 4,000), and a 45-minute drive to school or just about anywhere he and his family wanted to go. “When you spend that much time in the car, you start to think about the landscape and what it means in a different way,” says Lindsey, who also had a natural artistic bent and took art lessons from third grade on. He still keeps sketchbooks and painting canvases handy. “It keeps my senses sharp,” he says. But it wasn’t until taking introductory ecology courses while at the University of Georgia that Lindsey began to understand that his particular lens was that of an ecologist; he viewed his surroundings in terms of relationships and systems.

Early influences included environmental thinkers like Aldo Leopold, who preferred nature and disparaged cities. Later Lindsey discovered architects such as Christopher Alexander, who argued that fixing the human habitat was central to solving the ecological crisis. “I realized that cities and ecology are more or less the same concept—it’s all about studying relationships,” says Lindsey. After hearing a lecture from a visiting new urbanist, he switched his major from business to landscape architecture. “What I didn’t realize was that what most landscape architects do is design people’s front yards,” laughs Lindsey, whose tiny downtown abode doesn’t even have a front yard. Rather than plotting the placement of azaleas and boxwoods in private gardens, Lindsey was interested in public spaces, in the civic realm, in how good design and planning for human-scale communities can create enhanced quality of life.

As an undergrad, Lindsey became so fired-up about the need for wider awareness about well-designed cities that he and a fellow classmate developed a charter for a Students for the New Urbanism (SNU) chapter and got it sanctioned by the Congress for the New Urbanism. Today, SNU programs thrive on college campuses across the country, all thanks to Lindsey’s initiative. One memorable experience from his SNU involvement: Lindsey and fellow aspiring new urbanists took a weekend field trip to study well-designed cities, including Beaufort and Charleston.

Designer Without Borders
After graduating, Lindsey realized his five-year degree program had given him the skills and techniques to do the type of urban design work he wanted to pursue, but not the broader vision. He was a Southern country boy, after all, whose first-hand knowledge base was limited to rural Washington and the small university town of Athens, neither of which come close to classifying as a metropolis. So he hit the road. “School moves you to the 50-yard line, but from there it’s up to you,” says Lindsey, who had sampled European culture during a semester abroad in Tuscany. “In order to be a competent urbanist, I needed a global understanding of how cities work.”

So from 2004 on, Lindsey has tried to spend two to four weeks per year traveling. He has observed, sketched, and walked the streets of Paris and Zurich; examined how Copenhagen’s city center functioned; studied Amsterdam’s bicycle infrastructure; and filled his passport with other world-class cities throughout Western Europe and the U.S. “My real education comes from observing cities that work and cities that don’t. But unlike many designers, I don’t have the world view that something that’s exotic or the ‘other’ is inherently superior,” says Lindsey, who first interned with the City of Charleston in 2003, then moved here full-time in 2004 as an assistant in the City of Charleston Planning Office. A year later, he joined its former director, Tim Keane, at the firm Keane & Co. In 2010, Lindsey ventured out on his own, opening Fabric Urban Design, which he closed in February to return to work for the city in this new post.

“Jacob has a unique combination of a brilliant design mind and excellent graphing and drawing ability. As a student, he grasped complex urban design issues and techniques quickly, and then represented them graphically so well,” says UGA adjunct faculty member Randy Vinson, who as planning director for the City of Covington, Georgia, hired his former student to create a new vision for a failed subdivision near Covington’s historic town square. “It was a sensitive project that shouted for Jacob’s talent,” Vinson notes. “He repurposed the foreclosed single-family subdivision into a vibrant pedestrian-friendly, higher-density neighborhood with diverse housing types, retail stores, and workplaces and also helped develop a brilliant marketing program using stop-motion animation.”

“I’m not a planner who tries to impose the values of another culture onto a place I’m working,” says Lindsey. “I believe the solutions have to come from the native place; they have to be of that place.”

But that doesn’t mean Venice’s signature canals might not be a good idea for a sea level, flood-prone city like Charleston, as Lindsey suggested in a rousing Pecha Kucha presentation in 2012. Incorporating canals as part of the port redevelopment; developing a robust ferry service, just like a cab service, to connect Charleston’s waterfront with North Charleston, Mount Pleasant, Daniel Island, and the beaches; imposing a universal speed limit of 20 miles per hour on the peninsula, where cars and pedestrians/bicycles interact; reinstituting the streetcar system that existed a century ago, connecting the peninsula with outlying municipalities; creating pedestrian-centered streets on King and George streets—these are among his “Ideas for Building a Better Charleston” that Lindsey floated during Pecha Kucha, drawing cheers and applause from the largely hipster crowd.

Far out and radical? Not necessarily, according to community leaders and visionaries such as Mike Messner, an investor, philanthropist, and trustee of The Speedwell Foundation, who hired Lindsey to design a proposed linear park called the Charleston Lowline, which would transform 1.5 miles of abandoned railroad tracks beneath I-26 into public green space and a pedestrian and bicycle park. “Jacob is immensely creative and capable,” says Messner. “He understands that giving residents and visitors more opportunities to enjoy beautiful public parks for recreation and non-motorized transportation enhances our sense of community.”

Make an Impact
In his new role at the helm of the Charleston Civic Design Center (CCDC), Lindsey is the agency’s third director, following the 12-year tenure of Michael Maher, who stepped down to spearhead development of the Horizon Project.   The center was proposed by Mayor Joe Riley as a result of the city’s 1999 Comprehensive Plan, to “elevate the discourse on urban design and…work across disciplines to foster innovation and sensitivity in promoting the best Charleston possible.” As an interface among city-led projects, public/private developments, and private initiatives that impact the city, the CCDC is in a unique hybrid position, a fact that, even Lindsey admits, has often made it hard to peg exactly what the department does.

Lindsey hopes to change this. His goals are to determine how the center “specifically will advocate for a higher quality of design in the city” and “to build a constituency that recognizes the value of great design in making the city better,” says this self-avowed “non-bureaucrat,” adding, “I’m here to make an impact.” The fact that he’s had experience on various sides of the fence—in the public and private sectors, and as a teacher at the Clemson Architecture Center in Charleston, will, he hopes, bode well in this new public role.

A former competitive cyclist and now a religious runner and sailor, Lindsey has an athlete’s focused intensity and a visionary’s forward propulsion, a combo that makes him both charismatic and relentless. “Jacob never stops, never unplugs from thinking about how to improve the city, about how to improve himself as a designer and a person. He’s one of these people who makes no distinction between work and private life,” says his wife, Martina Radic, a research psychologist at the Veterans Administration Hospital and a native of Croatia.

Radic grew up in the ancient, walkable, Dalmatian Coast city of Split, where her family still lives, and when deciding to pursue college in the States, chose the College of Charleston because of the city’s European sensibility. “It was important to me to be in a place that I could walk everywhere. I assumed other American cities were like Charleston but discovered this wasn’t so.” As for her husband’s incessant preoccupation with urban design? “I don’t really mind, because I’m also interested. I feel it’s relevant; design affects us. I’m from a very different culture that values its public space and city life. Jacob has expanded my perspective and confirmed that the way I think is not totally weird.”

Dense Dynamics
In Lindsey’s view, Charleston’s greatest challenge is to create a regional transportation plan and to make sure that dense urban areas are prepared for more density and high-quality growth. “We’re experiencing an unprecedented population growth phase, which means the different municipalities are in competition and the region could cannibalize itself if this growth isn’t handled properly,” he notes. Population has to be captured in such a way that it doesn’t strain the infrastructure, which means the dense, walkable areas need to be able to welcome and accommodate more residents.

Growth in density comes with challenges, but, says Lindsey, “growth is also the key to success. If handled properly, with transit options in place, increased density actually makes city life better for everyone. Globally, the cities around the world that have higher quality of life ratings have denser city cores than Charleston.”

Urbanism, to Lindsey’s astute design mind, is dynamic, not static. It offers an endless opportunity to fiddle with the sketch, to get things right. “I always have a critical eye, and my wife will be the first to tell you, I can be infuriated just walking down the street,” Lindsey confesses, “but my goal, the only thing I really want to do, is make cities better, so I temper that critical eye with an understanding of what the cities are doing well.” In the end, he says, “we’re simply trying to learn lessons. Even the best cities in the world can still be improved.”

10 Ideas to Build a Better Charleston
Sure we’ve been voted the best destination city in the world, but how do we make it the best city in which to live? For Charleston Creative Parliament’s December 2012 Pecha Kucha presentation, Jacob Lindsey offered these concepts to improve livability in the Holy City: