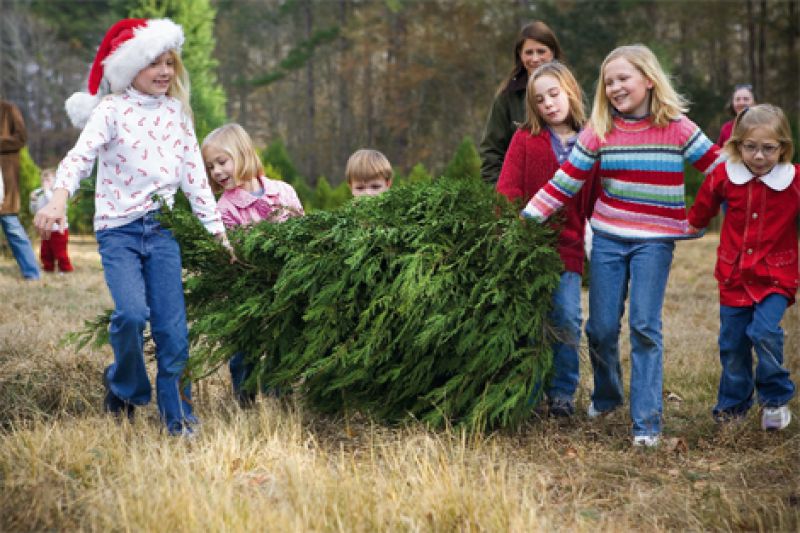 Over a few rivers and through the woods to the Christmas Tree Farm we go. Okay, it may be a stretch to conjure Currier & Ives during a Charleston December, nonetheless, the brisk-air delight and old-fashioned fun of going to the country to chop down a fresh pine is a Lowcountry tradition. For generations of families, the drive out to Toogoodoo Tree Farm in Hollywood is item number one on the holiday to-do list. Here, on a 38-acre evergreen expanse, excited kids in their blue jeans and fleece and parents, thrilled at the excuse to escape the mall, roam the fields looking for the perfect tree. Christmas music plays, a fire beckons, and the delicious smell of hot chocolate hangs in the cool air—even without snow it’s a charmed setting for a family holiday outing.

“Some of the folks who come out with their kids can remember coming with their own parents when they were young,” says Martha Walters, who along with her husband, John, shares ownership of the farm with John’s brother, Greg, and his wife, Julie. “Parents watch their kids run through the fields and talk to ‘Toogie,’ our famous talking tree, just like they did when they were kids. That’s really what it’s all about.”

This will be the fourth Christmas season that the Walters have operated the tree farm, a job that is both labor- and hospitality-intensive as harvest season becomes a month-long outdoor Christmas party for their customers. The two couples and their six children look more like the fresh-faced families featured in a J. Crew or L.L. Bean catalogue than your typical tree farmers. Perhaps that’s because Martha, John, Julie, and Greg never imagined they’d be manning a 15,000-tree operation, for Christmas or any other reason for that matter.

“I happened upon the property while I was looking for land to keep horses,” says Martha, an accomplished equestrian. She was attracted to the property’s large fenced paddock; the fact that it happened to include a house, a small pond, a gift shop, and acres and acres of trees was, shall we say, a Christmas bonus. “We called Greg and Julie and asked, ‘You want to own a Christmas tree farm?’ They said, ‘Sure,’ but I don’t think they took us seriously. A couple of weeks later Greg suggested we go and check out that property we were considering. We told him, ‘You’re too late. You said yes, and we’ve already signed the contract.’”

On Donner, On Tractor
That was September 2003, only three months before the harvesting season, and the tree farm had been in between owners and neglected for a year. “The grass and weeds were so high you couldn’t see some of the trees,” Julie recalls. “People thought we were crazy. They told us there was no way we could get it ready for Christmas, but we pulled it off.”

The Walters enlisted the help of Charlie Moore, the tree farm’s previous long-time owner and evergreen expert, who had retired and sold the property a few years earlier. “We would have been sunk that first year without Charlie teaching us how to care for the trees,” says Martha.

The effort, both that first year and every year since, is a full-force family affair, involving grandparents, parents, and all six kids, with the family dogs even tagging along. “Other than a few Citadel cadets who help during Christmas, we do it all ourselves, with no hired workers,” says Martha, with a hint of dirt-under-her-fingernails pride. She and Julie, former Ashley Hall schoolmates, are now tractor mates, trekking out from their Mount Pleasant and James Island homes twice a week, from summer through fall, to keep the grass in check. “We’re mowing constantly,” says Martha, who also oversees care of Fran, Charlotte, and Lila (the three goats), Pork Chop and Jelly Bean (the two potbellied pigs), and the assorted sheep, chickens, and peacocks that make up the beloved Toogoodoo petting zoo. Julie, a certified Master Gardener, lends her expertise as the farm’s horticulturist, tending to the humidity-happy funguses that can threaten the indigenous cedars and pines.

While the older kids get to drive the tractors and help mow, all of them pitch in with the annual tree planting (3,000 seedlings each January) and animal upkeep. The dads, meanwhile, do the tree-trimming, stump-grinding, and tractor repair. They’ll also help with mowing—as much as their non-agrarian professions permit, anyway. In real life, John, a physician, is director of Emergency Services at Roper Hospital, and Greg, a pilot, flies for UPS and is a Lieutenant Colonel in the South Carolina National Guard/Air Force Reserves.

And come late November, before the Walters’ Thanksgiving leftovers are even put away, all hands are on deck to help create the down-home (or down-farm) Toogoodoo spirit that loyal customers near and far equate with Christmas. Martha’s father steps in as the Toogoodoo Choo Choo conductor and chief “lighting commando,” webbing the grounds with a thousand points of light. Her mother contributes cases of her fast-

selling Mimi’s Hot Pepper Jelly for the gift shop, where John and Greg’s mother, dressed as Mrs. Claus, runs the show. The third generation of Walters farmers, ages six to 12, occasionally take a break from their tree forts and hard-core games of hide and seek to escort customers through the fields or take turns as the voice of Toogie. “I ask the little kids to feed me sticks, and they love it,” says nine-year-old Lizzie, Greg and Julie’s middle child.

“When my parents told me they bought a Christmas tree farm, it was late summer, and I thought ‘What in the world? That’s crazy!’” says Lizzie’s sister Ellinor, the eldest of the crew. “But I love it. We have a lot of fun here.”

Growing Tradition
Customers may leave with a tree tied on top of their car, but the real product harvested here is holiday magic. A canopy of Christmas lights and seasonal music playing over a loudspeaker set the enchanted mood; a crackling fire and the lure of gooey, roasted marshmallows reward lumberjacks who’ve worked up an appetite sawing down trees. In a spirit of hospitality, the Walters serve up hotdogs and hot chocolate, freshly popped popcorn and candy, and take kids on train rides to the petting zoo, all for free. “It’s part of the Toogoodoo experience; it’s become part of their holiday tradition,” says Martha. “People make a whole day of it. They appreciate the noncommercial atmosphere. Here they can take a break from the hustle and bustle, enjoy the outdoors, and remember what the season is all about.”

And as for Martha’s horses, the original reason for buying the property? “They’re stabled elsewhere for the time being. I’m too busy now to care for them here,” she admits. But in lieu of horses, the tree farm has become a corral of treasured family memories for the close-knit Walters clan, and for many others. Not such a bad trade-off, Martha concedes. “When you see kids run up and give Toogie a big hug, you realize it makes their entire Christmas, and it makes ours, too.”