The Ocean Room
WRITER:
Jeff Allen
PHOTOGRAPHER:
Christopher Shane
No one stumbles upon The Ocean Room. More than any other Lowcountry restaurant, you make a deliberate effort to be here and bring your wallet with the intention of relinquishing it in the pursuit of pure luxury. 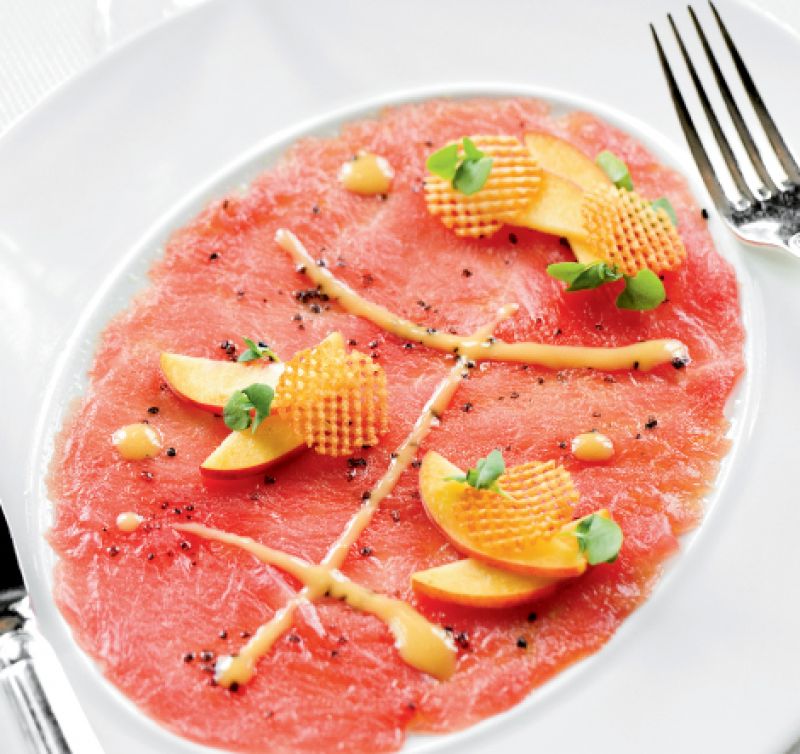 Perhaps it’s the grand live oaks on the long drive into The Sanctuary at Kiawah or the opulence of the building itself—twisting monoliths of stairs and wrought iron and perfectly matched mouldings rise from lush wooden floors, couches and chaises beckon with leather soft as buttercream—but unless your blood be royal, it’s a world apart from everyday reality.

It’s best to start in the bar with some vintage cocktails and a bit of creative sushi before moving to the main dining room, where you’ll meet people like Greg Irvin, a veteran server who’s been attending The Ocean Room since its inception in 2004. He states the menus in terse prose, if only because the food can speak for itself. He introduces sommelier Garth Herr, whose extensive wine collection includes what has to be the most magnificent vertical of the Lebanese Chateau Musar in the Southeast. The bread will come in five different forms; the white tablecloth meticulously cleaned and crumbed; there is a plush little stool placed beside your date’s chair for the sole purpose of holding her handbag.

Here, you sample the detailed cuisine of chef Jason Rheinwald, who moved up from sous to take the helm a few months ago. The menu lost none of its extravagant charm, the tasting menu weaving its way through luxuries of the world. The summer season brings fine ahi tuna adorned with peaches, saffron, and tiny basil leaves. The soup course is a cold vichyssoise of sunchokes paired with melons and fried leeks. A prime filet mignon comes cooked sous vide to a perfect 130°F. Lumps of pork belly get topped with blueberries that have been deeply crusted with a fine granola and crowned with blueberry foam.

For all its grandeur and the modernism of the cuisine, The Ocean Room has improved of late through a process of simplification. What used to be a steakhouse that buried meat beneath sauces and extravagantly composed plates now presents a more refined style on the à la carte side of the menu—one that emphasizes the considerable quality of the ingredients that chef Rheinwald sources. The $70 lump of Wagyu beef sirloin weighing a mere six ounces will bring new revelations of what a steak should be. Presented plainly on the plate, its richly crusted exterior appears almost black against a stark white backdrop. It comes in the true Pittsburgh style. The interior is a perfect cool, rare all the way to the edge, and a cut through the meat reveals rich striations of fat held precisely at the point of melting. It is almost gelatinous in its consistency, a marvel of flavor and execution.

Classic preparations certainly abound here, if wholly reinterpreted. There is suave lobster bisque, poured tableside, full of perfectly poached nuggets of Maine lobster. For those determined to have a classic steakhouse meal, there is a rather traditional Caesar salad, a selection of cold oysters on the half shell from Prince Edward Island to Bulls Bay, and a jumbo shrimp cocktail poached in Palmetto lager. Of the nine entrees, five are cuts of beef—the Wagyu strip joined in extravagance by a 45-day dry-aged bone-in rib-eye. Optional side dishes are equally lavish: a whole crab cake, butter-poached bay scallops, and lobster mac ’n’ cheese. Or you might opt for the truffled steak fries or tater tots studded with some of Alan Benton’s smoky mountain bacon.

If you can finish all of that, Greg will appear offering a silver urn filled with mini-bottles of Underberg, an herbal bitters from Germany. You’ll order them because every other table he serves has done so. You’ve watched them grimace as they shot them down and nodded in agreement, Greg describing the floral nuance and warming vapors of the digestif in detail along the way. I found myself wondering what those little bottles really were and why everyone else elected to drink a strange black liquid on the sole recommendation of a waiter they just met—but I tossed one back in lieu of dessert. You drink the Underberg for the same reason you go to the Ocean Room in the first place: it speaks of luxury, extravagance, and things heretofore unsampled.

The Draw: Is there a more luxurious meal in the Lowcountry?
The Drawback: It’s a drive, but well worth the effort.
Don’t Miss: Masami Ranch Wagyu Strip
Price: $27-$72