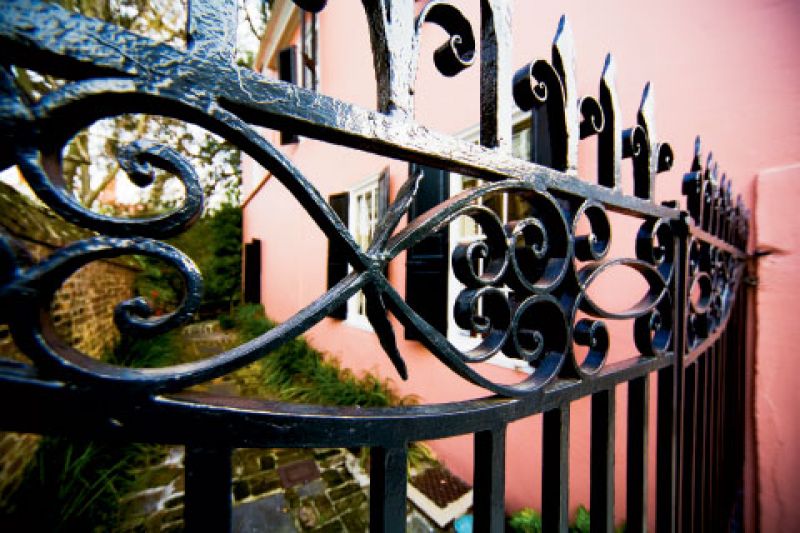 If these walls could talk, what tales they could tell. Built around 1730, Susan and John Williams’ house on Tradd Street was originally owned by Captain Francis Baker, a local merchant who also reputedly served as one of the Holy City’s earliest executioners. After Baker’s death, his son eventually sold the house, and it was enjoyed by a series of owners before being purchased in 1818 by Isaac Harby, a Renaissance man by all reckoning.

In addition to forming a school on Tradd Street for Jewish children, Harby was a successful playwright (President Monroe ­attended the performance of one of his plays at the Dock Street Theatre), an editor, and a ­journalist. But his most lasting contribution was establishing Reform ­Judaism in the United States at Kahal Kadosh Beth Elohim. Perhaps it was Harby’s penchant for ­rational order that inspired him to ­redecorate the house’s interiors with its predominant Adamesque woodwork—a style closely associated with the intellectual vigor of the Scottish Enlightenment.

Harby died suddenly in New York in 1828, and the names of subsequent 19th-century occupants aren’t recorded, but by the last half of the century the house had fallen into a sad state. Its neglect may have turned out to be a blessing in disguise. Whoever owned the house apparently lacked the funds to update and “improve,” so, after being carefully restored in the 1930s, the house has been handed down to the Williams, who found an architectural treasure when they bought it in 1992.

The house contains a cache of architectural details that bear testimony to the remarkable craftsmanship of early Charleston builders. The deeply recessed doorway—featuring a Federal fanlight, ­sidelights, and fluted pilasters that support an unbroken pediment—opens to a central hall with a ­dramatic stairway that, in addition to the original risers and ­mahogany handrail, boasts the original ­Georgian cypress dadoed paneling. “When we restored the house after we bought it, we ­decided to leave the stairway paneling ­unfinished, rather than ­repaint it, to display the remarkable grain,” says John, who is a residential architect and vice chair of the board of trustees for the American College of the Building Arts.

Elsewhere, interior woodwork—around cornices, surrounding fire­places, and framing doors and built-in ­cupboards­—“reads” like a textbook on 18th- and 19th-century ­artisanship. All the interior cornice moulding, for ­example, is hand-carved. “Modern trim is constructed by building up separate strips of moulding by layering one atop the other,” John ­explains. “But this,” he says, pointing to a cornice, “was all carved from a single piece of wood.”

Restoring woodwork usually ­requires hours spent scraping off layers of accumu­lated paint from flat surfaces and between tight crevasses. But happily the house ­required relatively ­little elbow grease—at least in this regard—for the Williams, who did most of the restoration themselves.

Stripping paint and wallpaper revealed some unexpected treasures. In a hall joining the original front half of the house to a later 18th-century ­addition, the Williams ­uncovered original faux wallpaper stenciled in a trellis pattern surrounding an arched doorway. “Back then, wallpaper was more expensive than hand stenciling, so this was an eco­nomic way to dress up the interior,” John says.

A glance downward bears witness to the rich and durable natural resources available to colonists. The floors are the original heart pine planks, some of them eight inches wide.

Some mysterious touches add subtle whimsy to the house’s otherwise ­restrained Georgian aesthetic. Windows on the east half of the front façade incorporate nine-over-nine windows, typical of the 18th century, while the western half features less common six-over-six windows. Whether the latter ­replaced nine-over-nine originals damaged by the Union bombardment of Charleston or the Earthquake of 1886—or whether they’re ­original—simply adds to the house’s con­stantly ­unfolding intrigue. (Susan, who as a realtor is accustomed to noticing such ­details, laughs that it took two years of living in the house ­before she noticed the mismatched windows.)

The overall soundness of the structure ­affirms the workmanship of the builders, signifying strong bones that have ­endured wars, earthquakes, and hurricanes. “The house is amazingly solid,” John says. “You can be downstairs and not hear someone walking right overhead, and there’s virtually no noise from the street.” When the floorboards were removed to analyze the structural integrity of the house, John was ­surprised by the building method employed. He found revealing framing techniques that suggest the builder was a shipwright, which makes sense considering the original owner was a former ship’s captain.

At the rear of the house, the garden features architectural treasures that signal the passage of Charleston’s evolving history. The space, which is quite large for the peninsula, is enclosed by a high wall made of bricks that once formed barracks for Colonial British troops. In the mid-1900s, owners Mr. and Mrs. Frederick Richards commissioned celebrated landscape architect Loutrel Briggs to redesign the garden in his hallmark style: a series of outdoor “rooms” branching off the central axes of a modified cruciform walkway. On a ­library wall overlooking the garden, Briggs’ original blueprint hangs framed, proving how his imitable design has stood time’s vagaries.

At the front of the garden, which wraps around both sides of the house, wrought-iron Philip Simmons gates flank both sides of the house. The eastern gate is adorned with brass address numbers that once hung on the original wooden gates. When Simmons hung the new ones, Mrs. Richards noticed the numbers were missing and ­refused to pay him until he retrieved them from the dump and reinstalled them. It’s a tale the famous blacksmith fondly recalls, and part of the continuing legacy of this house full of enchanting surprises.