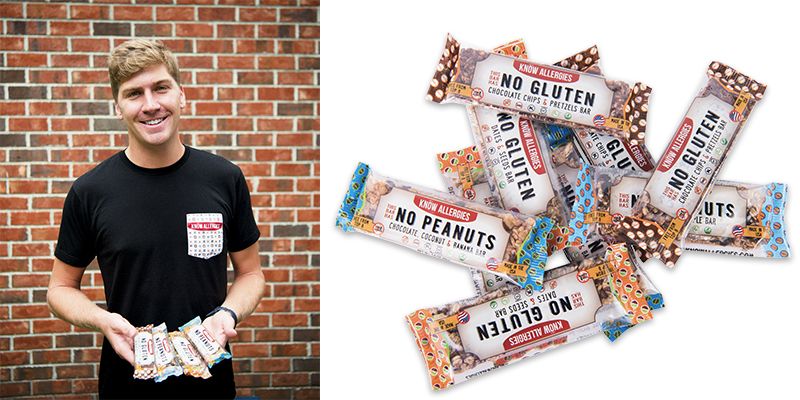 PHOTO: All of Amos Bartlett’s Know Allergies bars are organic, vegan, and free of the top eight allergens.

First, flip it over. Anyone with a food allergy knows the drill. Before biting into any snack, you must carefully scan the ingredients list. “You don’t care what flavor it is or who makes it,” says Amos Bartlett, creator of Know Allergies bars. “All you’re thinking is, ‘Can I eat this without dying?’”

That’s exactly what Bartlett, who’s allergic to peanuts, was wondering as he stood at the base of Washington’s Mount Baker during a ski trip in college. His friend had tossed him an energy bar with a vague allergy statement—“Something like, ‘This may have been produced in a facility with peanuts,’” Bartlett recalls—but he was hungry from snowboarding, so he ate it anyway. On the chairlift moments later, his throat started closing up. Luckily, he was able to speed downhill and treat himself with Benadryl, but the experience left him wishing for a snack that clearly said “no peanuts” on its wrapper.

Turning that idea into a company was no small feat for the 2014 College of Charleston marine biology grad, who never took a business class and wasn’t too keen on baking. “I’m from New Orleans, so cooking’s always been important to me, but baking’s hard because it’s very precise,” he explains. Nevertheless, he started mixing recipes for granola, using only ingredients that were free of the top eight allergens (including milk, eggs, peanuts, tree nuts, and soy) and also certified organic, kosher, and vegan.

The sticky part was making the bar, well, stick. His science degree proved useful: “Had I not taken organic chemistry, I would’ve never figured out how to make a granola bar stick together,” Bartlett says. The process took two years, including a nine-month stint of testing two recipes per night in his downtown apartment. “I’d ask all of my neighbors if they could try the bars,” he recalls.

By 2015, he’d nailed down four flavors—chocolate, coconut, and banana; maple and blueberry; dates and seeds; and chocolate chips and pretzels—and begun selling bars to Caviar & Bananas and other local shops. Thanks to culinary expos, including Charleston Wine + Food and New York City’s Fancy Food Show, he’s now brokered deals with gourmet groceries across the East Coast and Midwest, as well as Harris Teeter branches in Charleston.

The 27-year-old’s goal is to sell bars nationally in Costco, Whole Foods, Earth Fare, and Kroger, among other outlets. “Kroger approached me in 2015, but I was too nervous to talk to them,” Bartlett says. “I think I know a little more now.”