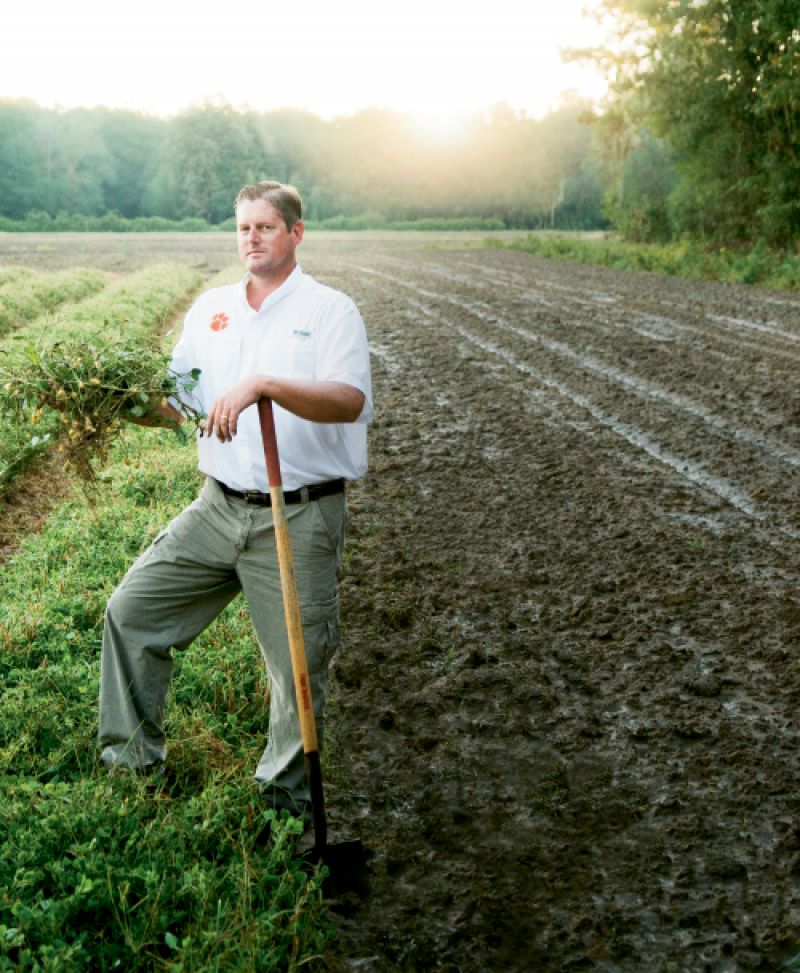 Dr. Brian Ward was handed 20 rare peanut seeds in April 2013, he knew to treat them very, very carefully. They constituted half of the only surviving seeds of the Carolina African runner peanut, brought to the New World by slaves in the 1600s. Ward, who heads up the organic research division of Clemson’s Coastal Research and Education Center on farmland flanking Savannah Highway, embarked on a mission to reestablish the near-extinct peanut in Southern fields. We checked in with him just before this year’s harvest to find out if we’ll be tasting these heritage legumes anytime soon.

CM: How did you get your hands on these rare peanuts?
BW: Dr. David Shields found the seeds at North Carolina State University’s peanut germplasm facility, then approached me and asked if I could grow them with the rest of my heirloom and heritage plants, such as okra, Sea Island cotton, Ossabaw indigo, Sapelo Island red peas, dent corns, and Carolina Gold rice.

CM: Were you nervous handling those precious seeds?
BW: Absolutely nervous, yes, yet confident. I had never grown peanuts before, but in my many years of study and hard work at Auburn and Clemson, I had seen them grown.

CM: Was your first harvest successful?
BW: Definitely. I planted them by the highway, where the deer and raccoons typically don’t hang out, and I checked on them daily. I was very anxious before the first harvest. Twelve plants made it and were actually fairly vigorous. We took those seeds and now have 1,200 plants growing. Next year, we’ll use an even bigger field.

CM: What’s the end goal?
BW: The goal is to repatriate the crop, to bring the peanut back for restaurants and small growers. Personally, my big push is to work with farmers across the state to convert more and more of their fields to organic farming, to help create new markets for South Carolina growers. If I can help a grower make a profit off of something I did, that’s what Clemson is all about.

CM: When can the public try the peanuts?
BW: After next year’s harvest. We’re still growing out the crop to make it commercially viable and to get it in the hands of growers. Then chefs can start using them and hopefully bring some awareness to them.

CM: Who will be the first to receive them?
BW: Chef Forrest Parker at Old Village Post House in Mount Pleasant, who threw a dinner last year to help us raise money to further support the repatriation of the Carolina African runner peanut. And I’ll reach out to Sean Brock, Jimmy Hagood. I’m not really a foodie per se, so I don’t know a whole bunch of chefs. I’ll grow the peanut and let the culinary world figure out what to do with it.

Born: Fayetteville, West Virginia, to a coal miner’s daughter; Moved to Charleston at age four after the family fell in love with the area while on vacation

Lives: In Goose Creek with his wife, Margaret, and kids, Sarah, Daisy, Emilia, and Dalton

Favorite ways to eat peanuts: Home-boiled and Cajun-spiced or sautéed in olive oil and thrown into a vegetable stew