Rainstorms
WRITER:
Melissa Bigner
The joy of being washed awake by a Charleston downpour 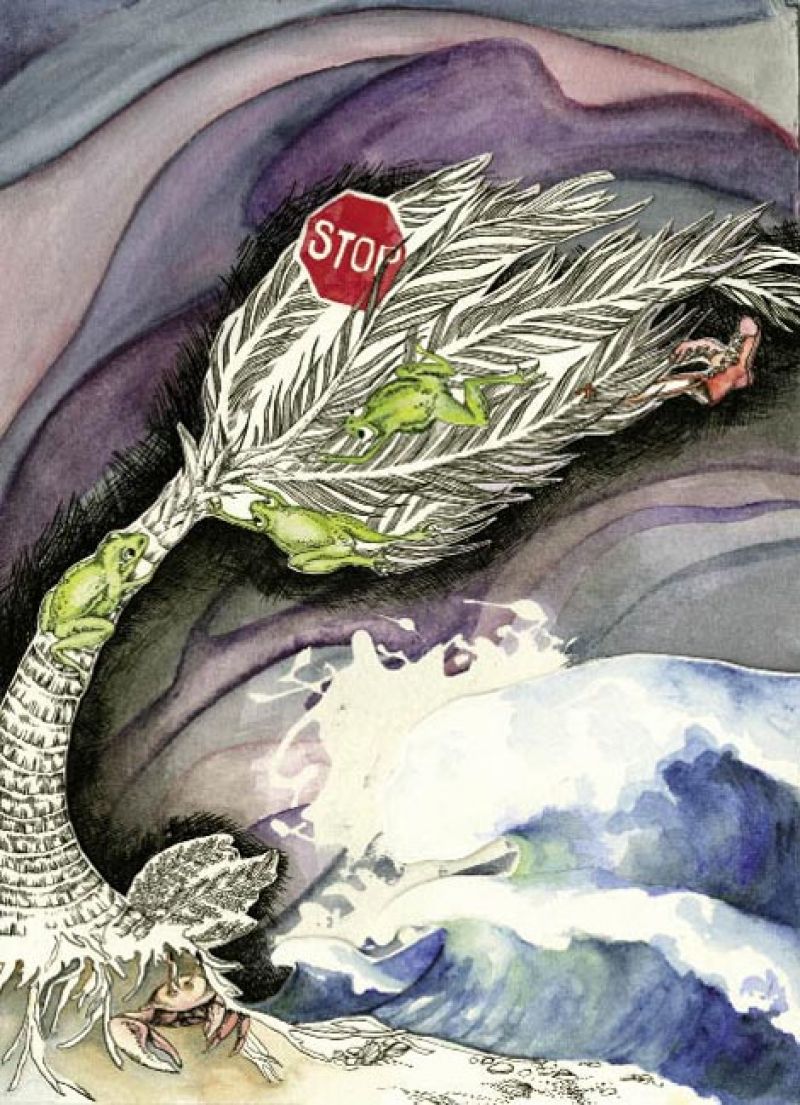 I was a wreck my first January in Charleston. The dot-com bomb had gone off in my face, and I’d slunk out of Atlanta to live here with my mom, waiting for the dust of September 11 to settle in Manhattan so I could seek employment there come spring. I spun it like I was on a Deep South sabbatical, but the truth was, I was fried at 30. Having measured myself for ages first by school awards and accolades and later by bylines and business cards—and now without any of them and beyond worn out from a relentless “make it happen” pursuit of each—I was emotionally unemployable and in the midst of a full-blown identity crisis. Which is why the first real morning I remember here, I was standing in an icy rainstorm next to a paddock on John’s Island.

Volunteering at a horse stable, trading muck time for riding time, was part of my ditch-the-humans strategy to regain a grip on things. No matter I didn’t know a feed bucket from a manure bucket; had never driven a Gator, let alone a tractor; nor that being in a stall with huge, potentially skittish beasts sort of freaked me out. In a matter of days, I’d tossed my pride and fear out with my office clothes and was enrolled in equine tending 101. So that first memorable January, wearing boots, jeans, and a sweatshirt, I was throwing bale flakes into a pasture when the rain came down. I kept on with the work—it’s what you do on a farm—as scratchy stray hay scraps worked their way under my shirt and down my back; in no time I was that wet, red-skinned kind of cold that stiffens and aches. But then, realizing that it was 9-something-a.m. and I wasn’t staring at a clock nor sitting at a desk, I starting laughing like a full-on nut job. It was a core-felt visceral awakening, born of being really, deeply soaking wet, cold, itchily alive, and thrilled.

Suffice to say that was eight years ago, that I never left, and that it was the first of many Charleston rainstorms to coax me back to right here, right now. As a kid—while other Tarheel families ran about unplugging phones and TVs and cowered in their basements hoping that the sump pump and generators would stand and deliver—my mom would call my sisters and me out on the porch to take in whatever storm washed over us. We’d stand out there watching the loblollies whip and snap like rushes in the gusting wind and staring at sheets of water so dense we couldn’t see across our cul-de-sac. “Isn’t it amazing,” she’d marvel, and I’d “mhmm” in agreement.

Somehow, though, between then and early adulthood, I’d gotten away from that reverence, that nowness, and it took that first Charleston storm to bring me back. Today, when I stray off track (as I always do), they call me out, to walk in the midst of them, to be washed awake again and again.

These water walks of mine are a year-round thing. I’ve headed out along the Battery in Teva knockoffs, wading through warm puddles as a not-quite tropical storm nears, stop signs shaking frenetically, whining loud as they struggle to free themselves from the soggy earth. I once called a friend in the midst of one of these gales, and she mentioned that downed power lines and wading might not be an advisable match. Point taken, I reluctantly retreated to my porch. Another night, this one in winter, I bundled up and wandered South of Broad as the water came down, gloriously alone in the middle of a city, until the exposed part of my jeans between my boots and my raincoat grew too wet and numb to continue without crossing the line into sadomasochism.

Walking home from a Spoleto event still another evening, the skies opened up, and I pulled off my heels; when I rounded a corner near Wentworth and Smith, I found myself standing in a sidewalk swarm of ecstatic frogs like some fairy girl. Yet another time, I strolled Waterfront Park in a stormy midday blackout as the flags flagellated angrily, snapping cruelly against themselves while their lines clanged mightily against their metal poles. Palmettos shook off their ribs, littering the greens with what looked like prehistoric bones, and whitecaps reached up to roiling clouds who scoffed their advances, spitting on them as their rebuked sea-suitor swelled with want.

If there’s a universal spirit to tap into, I feel it most immediately in the midst of and wake of these storms, and most acutely here in Charleston. Being by the water, living so many hours out-of-doors, I’ve never felt more at the mercy of the elements, nor as humbled by or connected to them, as I do here.

Today, though I can’t walk out my front door and see the Ashley or the harbor as I did at Mom’s or my old apartment, I still get my fix. Mornings, I jog over to nearby Hampton Park, and when it rains there, it’s divine. Funny thing, though, these days it’s often less about being in the thick of it and more about relishing the aftermath.

Take the last time I trotted along Hampton Park’s outer rim, post-washout. The oaks verily shivered. Thick, curly swaths of neon-green resurrection ferns coated their limbs, and the trees seemed to revel in the water-slick sheen of their leaves. In the park’s interior, crepe myrtles had thrown off dregs of Spanish moss like torn party frocks, gowns tired out from a night of reveling. Palmettos looked like Mother Nature herself had roughly (but thoroughly) combed through their shaggy, tangled manes, leaving piles of dead fronds for the humans to gather up. Passing along on the glistening road, I swear I felt their clean-scalp joy. And it wasn’t just me and the trees; that electric, reckless post-storm atmosphere liberated anything and anyone nearby.

My dog skipped, leapt, and hopped his way alongside me. An old woman waved a fan of soggy magnolia leaves she’d gathered at us. And me? Well, any time I intentionally get anywhere near the lot of it, I get that same bubbling giddiness that was gifted to me so many Januaries ago. It’s odd, I know, but I’d rather score a rainy day here than a sunny one anywhere else.