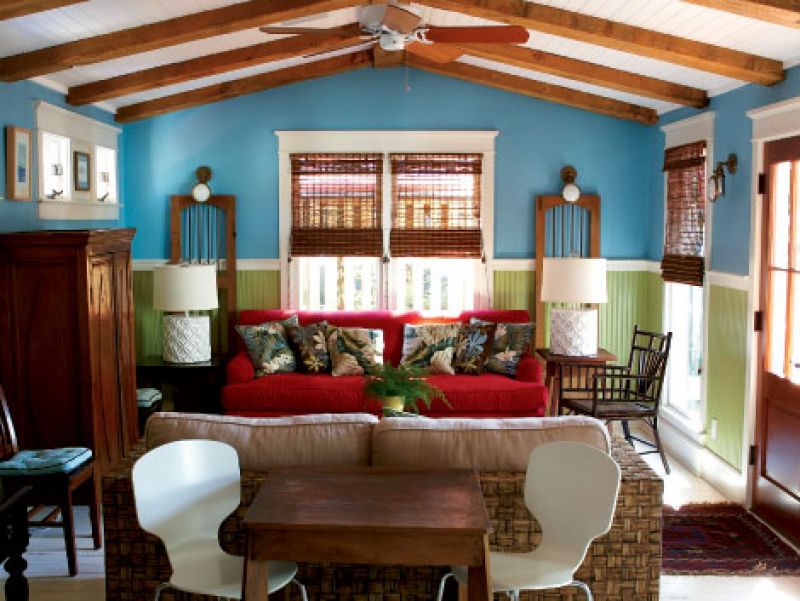 First thing every morning, Deb rolls over and asks me who I am today—Jimmy Buffet? Ernest Hemingway? Fidel Castro?” says Howard Brown. His wife’s smart to ask. With his gray ponytail, bright blue eyes, and ever-present ball cap, the man’s an irreverent, island-loving character in his own right—one who, like those icons, keeps you guessing as to just what’s coming next.

Today, Howard says in a slow, Southern grumble that he’s nothing more than a grouchy, old yacht-club guy. Hunched down in a chair in the ample kitchen of his Sullivan’s Island cottage, he’s tucked into a North Face jacket thanks to an odd cold snap. It’s that chill that’s brought out the grumps, because Howard can’t stand to freeze. “I’m pretty sure that in a past life I lived in the Caribbean,” he says with a grin. “I love the lifestyle there: doors and windows open, the outdoors in and the indoors out.”

Over the course of a nearly 20-year renovation (the bulk of which occurred between 2003 and 2007), Howard recreated that tropical life here, one his family—Deb and their two sons, Rudder, age 13, and Kep, 11—embraces as much he does. But island compounds almost two decades in the making obviously don’t just happen. For the roots of the Browns’ present-day getaway, you have to head to the 1950s.

Back then, Howard, a Bishopsville, South Carolina, native, first arrived in the Lowcountry when his mother packed him onto a Greyhound bus to visit his cousins and the nearby beaches one summer. Those trips became a family ritual, and after graduating from high school, Howard moved to the area in 1973, and then to Sullivan’s Island for good in 1977. After spending four years in commercial construction (he helped build DuPont’s Bushy Park plant), he started renovating old houses and, by 1989, had bought one of the modest beach shacks he’d been renting on Sullivan’s.

Around that time, he and Deb bumped into each other at a waterlogged Labor Day picnic at Station 22. Deb was visiting on a break from Washington, D.C., where she’d worked on the Hill and was entering a high-powered gig as an airport administrator. “He wore a full beard, was soaking wet from the rain, and had a ponytail,” she laughs. “He looked like a drowned troll! But that was when Sullivan’s was full of characters, and Howard fit right in. We became pen pals, and I had to make a choice: rat race or island living? I was 31 and opted for island life.”

Since those days, Sullivan’s funkier elements have been tempered with an influx of the Vineyard Vines set. But stalwarts like Howard and Deb have left their print on the place, too. Take that little cottage Howard bought back in the late ’80s. In those days, the 600-square-foot “teeny tiny” 1930s cottage was a blink-and-you’d-miss-it affair on Myrtle, one block off Station 22 1/2. Chopped into seven miniature rooms, it had been a weekend rental, sans insulation and frills. But Howard had it in his mind to mold the place into a quaint Maine cottage. That was “B.H.”—Before Hugo—and after the hurricane, the house was roughed up soundly. Yet when the local fire chief offered to send FEMA bulldozers over, Howard declined. Since a good portion of the structure still stood (which meant he didn’t have to hike the house up to address new building codes), he salvaged what he could and started what has become the Brown family compound of today.

The house grew in fits and spurts—from 600 to 1,100 to 1,400 to 1,700 to the present-day 2,800 square feet—until the dust settled on the two-story, three-bedroom, three-bath space in 2007. The growth weathered the births of two boys and Howard’s time as a back-to-school grad student, Mr. Mom, and exporting entrepreneur, plus his current role as head of Lucas Street Design, a local design firm. It also saw Deb’s runs as an at-home trader and public school volunteer before her present-day gig as Super Mom and Brown home manager.

As for the house itself? In the same way the Swiss Family Robinson made use of anything that washed up on their shores, Howard pieced together the scraps and bits that washed into their life to fashion the family’s dream dwelling. Through his years as a contractor and designer, he’s always been loath to trash even the paltriest leftovers from a project. So those remnants found their way into the corners of his home—as stairway risers or thigh-high paneling on a sleeping porch, as beadboard that wraps around the odd structural beam or as mismatched timbers that stretch across ceilings—giving the place a patchwork feel that imparts texture, depth, and personality as charming as its occupants.

Today, such economizing goes under the “green” umbrella that’s so en vogue, no matter that savvy builders—and resourceful island types—have been employing such practices for ages. For his part, Howard says sustainability is about recycling elements and using superior materials—quality wood, stainless steel nails, copper flashing, bronze hardware, and more. “It just makes sense to use things that wear well,” he says, “especially in a coastal environment.”

That practical approach surfaced as rooms were added here and there and Howard solved architectural issues with quirky design solutions. Pipes creating a maze? Double the width of the wall to create a thick-framed entrance and trim it out as a point of interest. An air return throwing off the balance of a room? Build a corresponding cabinet opposite it to anchor the space. Painted floor scuffed from all the construction over the years? Buff the boards to create a weathered look.

When it came to décor, Howard naturally veered toward a nautical-tropical theme. Thus there are scores of Indonesian teak settees, low-slung cane-backed plantation chairs, glass-fronted bookshelves, brass-trimmed light fixtures, lazy fans, sailing relics, and antique maritime maps everywhere. “It’s all just stuff I like,” he says, “and over time I stitched it together for a cohesive look.”

As the interiors came together, Howard made sure the garden followed their easy-breezy suit. To create a Bahamas-like compound, he oriented the front door to open into a private courtyard complete with a fire pit, a screened-in bar hut he calls his “man cave,” a curved-top cabana lounge “where the ladies can talk and sip their wine,” and a private outdoor shower. The scene is swathed in a sea of green—fatsia, pittosporum, palms, sword ferns, papyrus, and more—so dense “you feel like you’re in a jungle,” Howard says, “and I love that.”

Back in the kitchen, Howard (whose Brown family duties include cooking in addition to interior design) surveys the end result of years of fixing this and adjusting that. “I don’t like everything totally shiny and new,” he says. “I like old materials, and when properly used, they give a place a lot of character.” Tossing out another under-the-brim near-grin, he says emphatically, “And I’m a guy who likes character.”