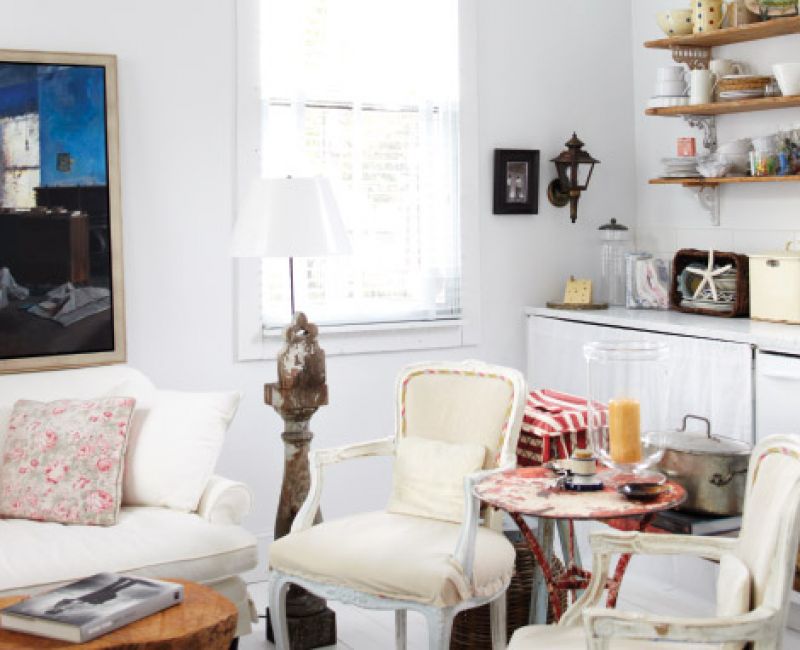 "We wanted a project,” says Marilynn Tynan. And project is what the Tynans got when Marilynn and her architect husband Dan bought a 430-square-foot carriage house on Ashley Avenue downtown.

The two—former owners of a painted furniture line up north—had been keen on Charleston since first visiting nearly a decade ago while vacationing from their Lake Michigan cottage. “It’s time we live somewhere where the temperature is more above my age than below it,” Marilynn remembers telling Dan. After the move South, they stuck to condos East of the Cooper, South of Broad, and so on. But then they spotted a tiny dependency near the very walkable Colonial Lake area.

“The place intrigued us,” says Dan. “It was small, and we’ve always liked small spaces. And it was historic; we guess that it was built around 1880.”

Other bonuses? The two-story home (there’s a miniscule garage on the ground floor) sported 16-foot ceilings (once the modern drywall one was removed), nine windows (each about six foot three inches), a sound structure, and it was detached from its corresponding main house and thus held claim to its own, independent entrance. The diminutive scale meant the couple could both afford it and afford to rework it, too.

So they got to work. After closing on the home in May 2009, contractors replaced the door (it had been chewed through by a previous tenant’s dog); took out the aforementioned ceiling to expose the gable roof line; installed a wood planked ceiling with a cottage look; and refurbished the exterior. Dan created a new floor plan—two rooms, including a “gathering” room (kitchen included), an original wood lathe and horsehair plaster partition that’s now rife with storage, and a bedroom suite with a bath that looks out over the neighbor’s garden—that came together in a matter of weeks. Then the Euro-sized appliances went in, a petite farmhouse sink capped off the kitchen, and marble found its home in the bathroom. Bottom line? Though it may be small, its amenities are grand.

“Look,” she continues, “this house was adequate when it was built and it should be adequate now—we still require the same things. More, for us, is excess.”

Here’s what they did: