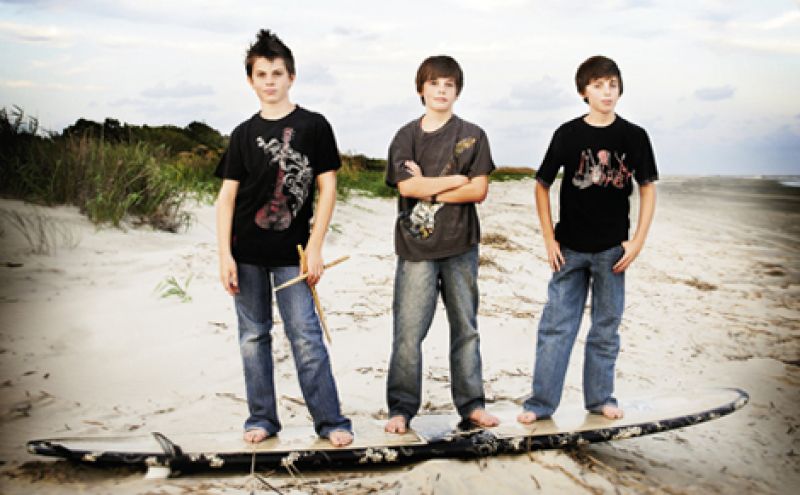 Why do passersby stop and stare when The 3 Dudes—a band the Ploch siblings formed back in 2007, Jonas Brothers-style—play at the Windjammer, Red’s Icehouse, or Blackbeard’s Cove Teen Night? Perhaps it’s lead guitarist Jack’s shreddin’ solo when the trio covers The White Stripes’ “Seven Nation Army.” Or maybe it’s bassist Sam’s trademark fedora or drummer Roger’s mohawk, which makes an appearance for special occasions, that catches their attention. Most likely, it’s that at 11 years old, twins Jack and Roger just hit middle school, and Sam, whom the family jokingly calls “the spare,” is merely nine. Easily the youngest band on the Charleston music scene, The 3 Dudes have already snared the attention of local fans. “At our concerts, people regularly pull out their camera phones,” says Roger. “It’s funny to see how big their eyes get.”

The 3 Dudes were wide-eyed themselves at the ages of six and seven, when they witnessed a playmate’s “rad” piano skills. The creative kids immediately caught the music bug and started learning their way around the ivories at weekly Music Unlimited lessons, soon adding more instruments to their repertoire.

By the fall of 2008, the trio had found good use for their talents: raising money for a man they lovingly nicknamed “the Bald Guy.” After finding out that the manager of the family’s favorite car wash was fighting brain cancer, the brothers, with help from supportive parents Samantha and Nelson, pulled together “Art From the Heart” and brought in more than $6,000.

Since then, natural talent and creativity, half a dozen instructors, a remarkable work ethic, and five practices per week have brought the Plochs great success. The dudes have given away thousands of copies of their four-song EP, All in a Day, and their sophomore album—inspired by encounters with teachers and classmates, playing outside, sibling arguments, and a love for rock music—drops this month. Each track is an age-appropriate original developed by the bandmates from discussions at the dinner table. Daniel Crider, one of Roger’s Music Unlimited drum instructors, remarks that the boys “really set the bar high for kids their age.”

So what’s next on the horizon? Perhaps a 3 Dudes clothing line consisting of vests, hats, belts, and undies? When Mom prompts them to share their five-year plan, the boys chorus “world stadium tours.” And as for long-term goals, Jack aspires to be a marine (the inspiration behind “The Marine Song”), Roger wants to be a chef, and Sam anticipates a career in the music biz. But for now, these pint-size performers are simply trying to tune in to the fourth and fifth grades. Listen up at www.the3dudes.com.