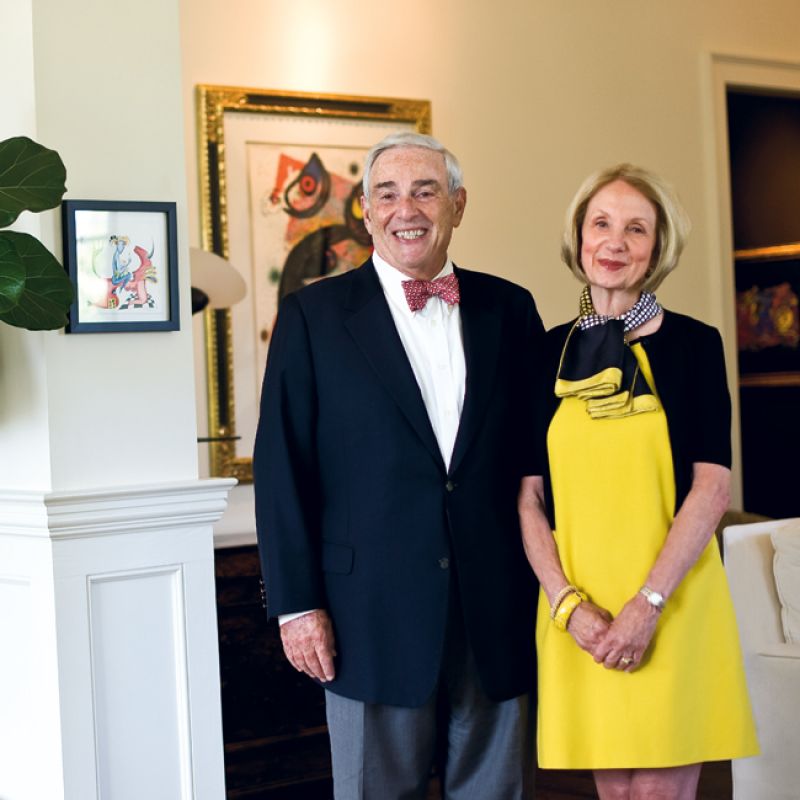 Here’s the thing about gospel music—it’s not intended for passive concertgoers. It’s hand-clapping, soul-rousing, do-something music. Which is why it appeals to Wally and Bev Seinsheimer. If there were a gospel music equivalent in the world of philanthropy, it would sound like the Seinsheimers. They are do-something, soul-rousing, high-energy people. And it’s why helping start the Charleston Symphony Orchestra Gospel Choir, while one of the couple’s lesser-known contributions to the community, is something that Wally finds especially rewarding and significant.

“This choir is about so much more than the music,” says Wally, a music lover and admitted “opera-nut” who can just as easily jive to Mahalia Jackson. “Its music gives me such warmth, but what I really love is that it reaches out to everybody—black, white, whatever. It has a direct and, I hope, lasting impact.”

Making a difference for the long haul is the pulse behind the Seinsheimers’ philanthropic philosophy. As the sidebar (opposite page) demonstrates, their names are, or have been, listed on the boards (frequently as “chairperson”) and donor lists of most of the high-profile organizations in town, but “we don’t make good typical board members,” Bev confesses. “I’m not really interested in showing up once a month, writing a check, then leaving.” Instead, they prefer to invest time, energy, and hands-on effort that will have an enduring ripple effect. Perhaps nowhere is this more evident than in their work to help prevent the number one killer of South Carolinians—heart disease.

Their generosity and vision established the Seinsheimer Cardiovascular Health Program at MUSC, an innovative, one-stop access point to comprehensive cardiovascular disease screenings, exams, and services. The goal is to help people live longer, healthier lives and to reduce the impact of preventable, chronic disease on the health-care system. As a former operating-room nurse who served on the heart transplant team at the University of Virginia Hospital, Bev knows all too well the repercussions of heart disease and has turned her passion for wellness into a crusade, founding and organizing the MUSC Women’s Heart Health Symposium, chairing the board of MUSC’s Heart & Vascular Center, and supporting the annual Go Red for Women campaign.

And like healthy veins, this crusade’s legacy, via vivacious Bev, extends in other unexpected directions, too, like the sparkling eyes of a fourth-grader who gets to see the magic of The Nutcracker ballet for the first time. That’s what happened when Bev visited Charleston Development Academy Public Charter School to enlist the principal’s support for the Women’s Heart Health Symposium and ended up volunteering to read to the kindergartners. She then became fourth-grade room mother for many years.

“It’s all interwoven, isn’t it?” she says. “You get involved in one thing, and it leads to something else.” Bev sponsored a club for the schoolgirls, who called themselves “The Carolina Pearls.” “They wanted to learn etiquette and manners,” says the Virginia native, who took them on field trips to restaurants, to the Family Circle Cup, and to The Nutcracker. “That’s what I love, what’s really important to me, to be involved with people. Those kids are so pure, so loving—it’s just amazing.”

As CEO of Dolphin Architects and Builders, Wally’s successful career as a custom-home builder and developer gives him solid experience in offering wise counsel on how to construct a strong base—something he’s done for Spoleto Festival USA; the Chamber of Commerce in Charleston as well as Beaufort, where he lived before moving to the Holy City in 1990; Trident United Way (TUW); and MUSC Foundation, among many others. Bev and Wally’s hands-on collaborative approach was behind the success of Habitat for Humanity’s “House that Congress Built” and is felt annually through the blistered hands and aching backs of thousands of volunteers who participate in Trident United Way’s Day of Caring, which is now tied to 9/11 after Wally, a former TUW board member and campaign leader, had “the incredible experience of huddling around the car radio with fellow Day of Caring volunteers who’d arrived at our work site [Cannon Street Y] on that tragic morning. Then we all just quietly got to work.” Afterward, he suggested to TUW leadership and area mayors that the Day of Caring become our community-wide way to honor those lost that day; the Day of Caring has grown from 200 volunteers in 2001 to 9,000-plus in the years following.

“They make an effective team championing causes important to both of them,” says Henry Blackford, a longtime friend. “Ultimately they are the best kind of supporters, because they believe in what we do,” adds Spoleto Festival USA general director Nigel Redden, who credits Wally for the successful restoration of the festival’s headquarters. But the ever-affable Wally simply shrugs and gives credit to his parents and a gleaming grin to his bride.

“I did something no Seinsheimer had ever done. I left Cincinnati, but I brought with me the values my family taught me, which is if you’re fortunate enough to be part of a community, then you give back. And then when I married this incredible woman 16 years ago, the joy we had from that was the impetus to do even more,” he says. “When you’re happy and grateful, you want to share that with others.”

TEAM SEINSHEIMER
Whether they double-team or divide and conquer, Bev and Wally always give whole-heartedly of their time, talent, and treasure