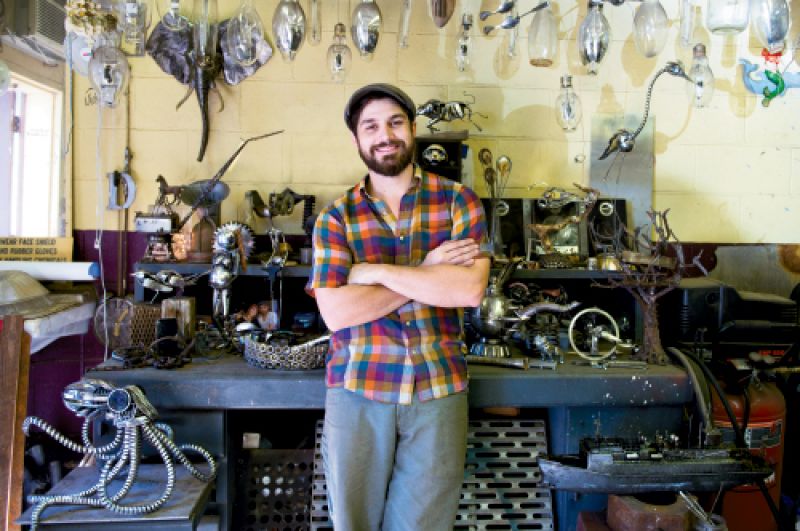 A cacophonous construction zone is not the place you’d expect to find a man crafting birds out of bent spoons, but Matt Wilson is anything but typical. As the resident artist at Detyens Shipyards, his job is to make models of the ships being repaired at the complex. Piles of parts discarded from Coast Guard cutters and Naval ships become Wilson’s off-hours creative playground, with nuts, gears, and scrap metal reappearing in sculptures like a mosquito drawing “blood” from an oil barrel or an octopus light now hanging at Palmetto Brewery. The Park Circle dad filled us in on his artistry.

Following his passions: I left Winthrop University when I had one year left to get my degree. All I wanted to do was be creative.

Landing a dream job: Loy Stewart, who owns Detyens, asked me what I would do with my life if I had a magic wand. I said I wanted to be an artist. I wanted to learn to weld so I could transition my art to metal sculptures, and he created a job for me. Now, every captain is given a model of their ship as a thank you for their business.

Big aspirations: My background is in drawing and painting, but I’m not comfortable doing the same thing for long. Right now, I want to try to be the best sculptor in Charleston.

What’s in the name: I named my company “Airtight Artwork” after my college nickname. People called me “Airtight” because I never said a word and kept to myself. It’s also a character from G.I. Joe.

Personal touch: I just did an octopus for a woman. I did some research, found out she was an amateur photographer, and used camera lenses for the eyes. Now I’m working on an Apache helicopter for a guy who plays trumpet, so I’m using brass instrument parts.

Reusing & recycling: The scrap pile is a playground for me. I just found a shovel handle that looked like a spout for a genie lamp, but now it’s going to be a trunk for an elephant.

Goodwill hunting: I buy a lot of silverware from Goodwill, looking for patterns and sturdiness. I have a Robin Hood idea to steal spoons from a high-end restaurant, turn them into a bird sculpture, and give that back to he place.

Recent work: One of my new sculptures is a broken iPhone in an old small-game trap. We always get trapped on our phones, and now it is the one being trapped.

Creative gift: I have recently started “bird bombing”—I always have a bird in my car to leave somewhere, my first attempt at street art. There’s one on top of the stage at the Sewee Outpost I put there before a Barn Jam.