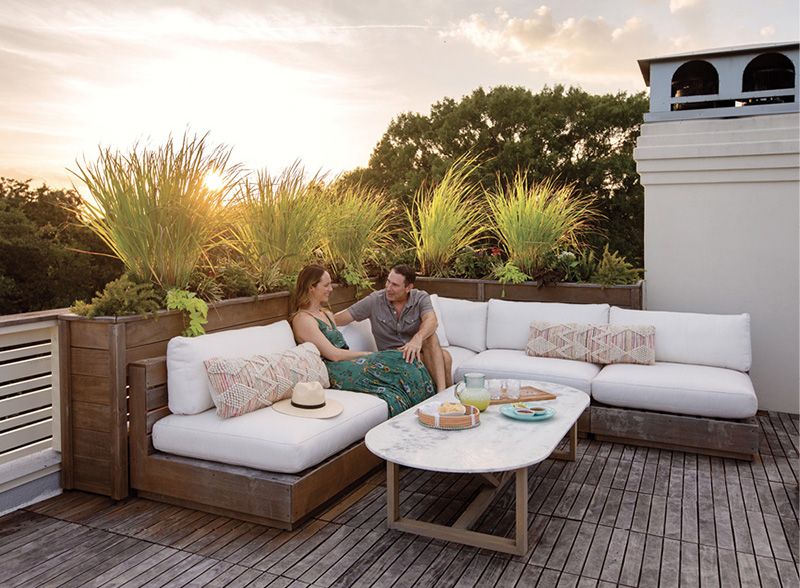 It was with mixed feelings that Robert “Spence” Spencer watched a bulldozer demolish his Mount Pleasant bachelor pad in June 2015. “It was just supposed to be a kitchen remodel,” he explains. Mere steps from the Pitt Street Bridge, the ’70s ranch house had been Spence’s home since his arrival in Charleston in 1999. There was a good reason for the “remodel” however: his bride, Erin, wanted more space to flex her culinary muscles, and she’d finally had enough of the pool table in the living room and the poky kitchen.

The three-story coastal contemporary home that rose from the rubble of Spence’s “perfect flophouse” more than made up for his nostalgic loss. From its four porches and rooftop deck with views of the Intracoastal Waterway and Sullivan’s Island to the thoughtful garden of native plants and ample seating areas, the home embodies the quintessential Lowcountry welcome—come in, sit down, have a drink, and stay a while.

Spence and Erin met on the dance floor at a fundraiser in 2011 and were married three years later. For a respectable amount of time, Erin put up with the various flaws of the bachelor pad she had inherited. But not long after their wedding day, Erin, who’s “an incredible cook,” according to Spence, refused to host any more dinner parties due to the closet-sized kitchen. 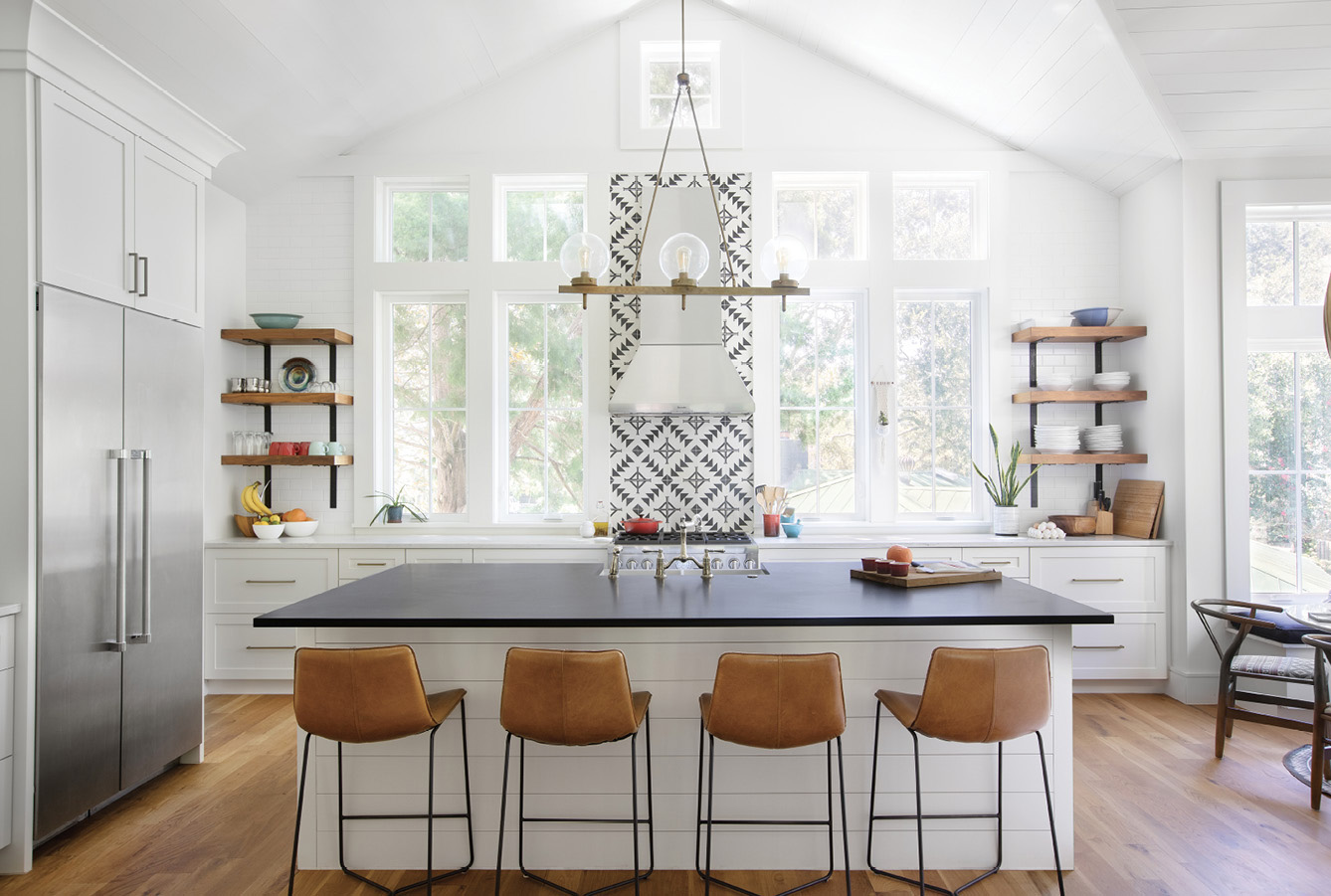 Made to Measure: The kitchen, the house’s raison d’être, is Erin’s happy place. It’s no wonder, as the cabinets, countertops, and shelves were designed and built to suit the avid home cook’s six-foot frame. Other custom features include the walnut shelves by cabinetmaker David Beason and the chandelier from Circa Lighting that perfectly frames the bold geometric backsplash. The black-and-white design was sourced from clé, an artisan tilemaker in California.

Determined to please his new wife—and host lots of parties—Spence embarked on a kitchen renovation. “I thought, ‘I’m handy, my buddies are handy, we’ll just blow this wall out and vault the ceiling.’” He consulted his business partner in Madra Rua Irish Pub, Stephen O’Connor, who has a background in construction, and his wife, Julie, an architectural designer and founder of American Vernacular. The pair drew up some renovation plans, but the extent of the work would require raising the house. “Ultimately, they decided that given the flood zone and the amount of work the existing house needed, it would be better to start from scratch,” explains Julie.

The resulting 3,000-square-foot, three-story house, built by John Frick with Level Building Projects, is just a tad more than they had bargained for—“there’s just us, no kids,” says Erin—but two “must haves” literally stretched the project. While the large, open-plan kitchen she dreamed of necessitated a wide footprint, Spence’s own imperative, a rooftop deck with views of Sullivan’s Island, pushed it higher. Before deciding whether a deck would be worth the trouble and expense, the couple had enlisted a friend with a bucket truck to figure out how high they would need to go. The clear answer? It was.

At first, the imposing structure seemed more suited to the shores of Isle of Palms than near the oak-lined Old Village, but its height has been softened by native vegetation that helps it blend into its surroundings. To bring down the scale of the house, landscape designer Jim Yonce, of Yonce Environmental, bordered the small front yard with hurricane-proof bald cypress. He added butterfly-attracting bottlebrush trees and drought-tolerant native plants, including wildflowers backed by saltwater-tolerant sweetgrass. “It’s designed to be a pollinator haven,” says Spence, who explains that once established, it won’t need supplemental watering. Other environmentally friendly solutions extend throughout the project, including a rainwater cistern that can supply the toilets and the laundry room, plus a well for irrigation.

Inside the home, sunlight dapples a neutral palette that embraces a modern cottage design aesthetic. Shiplap walls and white oak flooring contrast with bold geometric patterns and the open, industrial wrought iron and wood staircase. “We wanted high ceilings and an open feel with lots of natural light,” says Erin.

A wide entryway opens into a large kitchen/living/dining room with a cozy breakfast nook (Julie says she loves the way its ceiling intersects with the vaulted ceiling in the kitchen) and screened-in porch that provides plenty of space for guests to mingle. “Although, everyone always ends up in the butler’s pantry,” says Erin. The small room was another important element for the avid cook. “It’s logistically my favorite room: I don’t have to put the ugly stuff on my kitchen counters—the coffee maker, the microwave, and all.”

Erin planned the kitchen layout to serve her needs, starting with the triangle rule (stove, sink, fridge) and designing the drawers, countertops, and cabinets to fit her work flow. Everything is also about three inches higher than standard to accommodate her six-foot frame. “It was all built to our size,” she says, pointing to her six-foot-four husband. “The toilets are higher, the ceilings are higher, the countertops are higher—the house is higher!”

But her favorite design element is the open plan. “I love that the kitchen is open to the living area, I can watch TV or engage with whoever is hanging out there,” she says, noting that friends often congregate around the large, leathered quartz island.

Also striking are the many tall windows with deep sills. “I think we have 56 total,” she notes. “Julie says they are the jewelry of the house. Why spend money on art when you can have a window where the art changes—a new view every season.” Not that the couple eschewed art; works from Revealed Art Gallery grace the walls in the living areas, while a pair of “wired taxidermy” sculptures crafted by Greenville artist Alison Brynn Ross guard the entryway.

Budget and drive prompted Erin to tackle the interior design herself. “I’d never done this before, but I’m a Realtor so I see a lot of houses,” she says. “I pretty much pulled it all together with a lot of anxiety and plenty of help from Pinterest and Houzz.” 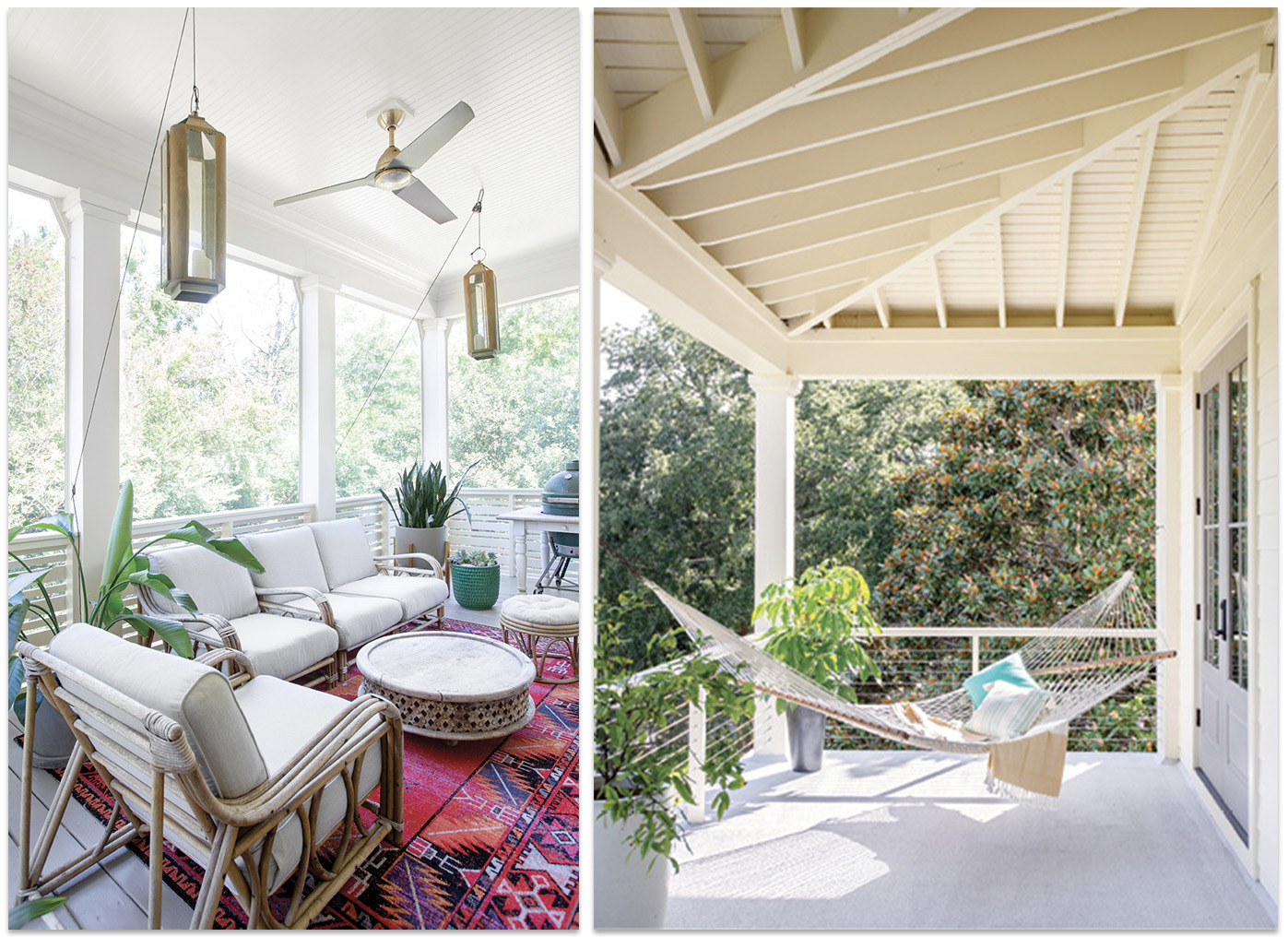 (Left) Chill & Grill: Newly screened-in, the back porch off the main living area offers more space for cooking and entertaining. Erin had the vintage rattan seating recovered by Aiden Fabrics, and Spence created a pulley system for the lanterns. (Right) Hang Time: With four porches, there’s always an outdoor perch for sitting and soaking up the sunshine, such as this double hammock, a housewarming gift, off the guest rooms.

She sourced furnishings and lighting from stores such as Celadon, West Elm, and Circa Lighting, as well as online. The key, she says, is taking your time—you don’t have to have every rug and every side table in place when you move in. “Your tastes and needs will change. I had a year to do it, and so I shopped every sale out there.” The house wasn’t even built when she scored nine hemp-wrapped brass wall sconces from Ro Sham Beaux on deep discount. “I didn’t pay full price for anything,” she says proudly.

While the living area might be their mainstay for entertaining, four porches allow for plenty of outdoor living. The two upstairs guest rooms share an expansive porch featuring a hammock for afternoon siestas, and the master suite has its own private space outfitted with cushioned teak chaise lounges and chairs from Tommy Bahama. But it’s the newly screened-in room off the living area that’s their go-to. “That was our quarantine project,” she says. “Now, we can leave those doors open and have an expanded area for guests to hang out.”

But the topper, quite literally, for outdoor entertaining is the rooftop lounge. The open deck with spacious seating is the ideal spot for cocktails with friends, facilitated by a crow’s nest-style bar and half bath just steps below. A hot tub (raised on a platform for an even better vantage point) beckons for coffee on a chilly morning or a sunset glass of wine.

The view across the Intracoastal Waterway to Sullivan’s Island’s iconic lighthouse was certainly worth giving up the bachelor pad. For Erin, the house might not be flawless, but it’s close enough. “Just because you designed it and had it built does not mean it’s going to be perfect. There will always be things you wish you had done differently,” she says. “For example, I wish we had given each guest room its own bathroom.”

Ultimately, the Spencers built a home that reflects who they are and how they live. “We went from a small house that had just the worst kitchen to an open, welcoming space that everyone wants to be in,” says Erin. That’s about as close to perfect as you can get. 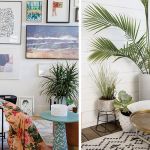 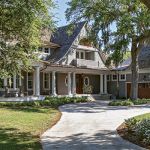