Getting Crafty
April 2016
WRITER:
Jenny Ouellette
Bottoms up, Charleston. A healthy number of bubbly startups are joining the 10 local breweries already in operation. Here, get the scoop on four companies that recently began filling glasses—plus six more on tap 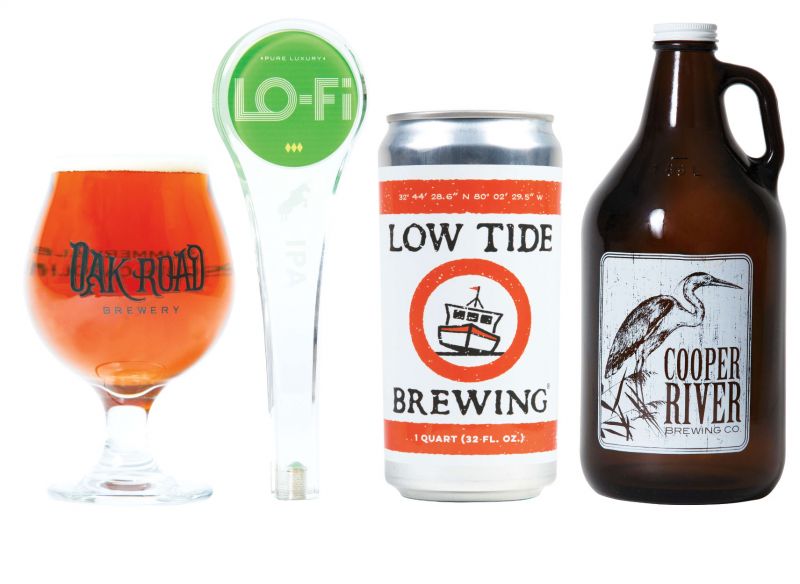 Est. June 2015
Oak Road’s five owners share more than an interest in beer: “Three of us were stationed in Germany while serving in the military,” says CEO Ben Bankey, noting that those overseas biergarten experiences inspired their current operation. Oak Road’s tap offerings include two German lagers and seasonal brews such as a German wheat beer and a Berliner weisse sour beer. While the nano-brewery (with a one-barrel system) has distributed to restaurants in the past, the focus remains on the taproom. www.facebook.com/oakroadbrewery

Est. February 2016
A former owner of Pisgah Brewery in North Carolina, Jason Caughman relocated to Charleston and started LO-Fi. Brewing a Mexican lager, a blueberry wheat, and an IPA, Caughman uses whole-leaf hops (instead of pelletized) that he says produce a more refined bitterness. LO-Fi’s current concentration is on distribution, and canning is next. Yet the space on Meeting Street is expansive: “I‘ve got a 25-barrel brew system, 10,000 square feet, 1.6 acres of land, and lots of ideas,” Caughman muses. “But I’m not in a rush.” www.lofibrewing.com

Low Tide Brewing
2863 Maybank Hwy., John’s Island
Est. March 2016
This 10-barrel brewery has a two-pronged mission: to create and distribute its own beer as well as collaborate with area eateries. “Bars and restaurants can contract us to brew custom craft beers,” explains founder Mike Fielding. “But we’ll also serve the signature beers in house, so people can do what I‘m calling a ‘taste-test of Charleston.’” So far, Low Tide has created a yuzu-lemon blonde for Charleston Beer Works and a Czech-style pilsner for Bohemian Bull, though more partnerships are in the works. www.lowtidebrewing.com

Cooper River Brewing Co.
2201 Mechanic St., North Charleston
Est. November 2015
Begun as a distant dream 10 years ago for Mount Pleasant neighbors Jamie Martin, Michael Gates, and Dustin Pait, Cooper River’s doors opened after the partners significantly renovated an old warehouse and hired brewmaster Mark Fesche. The 15-barrel brewery distributes to more than 100 locales, a number set to expand with canning and bottling operations. On site, guests can relax at a wooden bar salvaged from a circa-1870 barn while sampling some eight brews on tap; fan favorites include the Golden Ale and Inaugural IPA. www.cooperriverbrewing.com

On The Hop Horizon

Two Blokes Brewing
Matty Symons and Sean Geddis founded this seven-barrel brewery in Mount Pleasant. Slated to open mid-April, Two Blokes promises up to 12 brews on tap along with a few set for area distribution. www.twoblokesbrewing.com

Snafu Brewing Co.
Husband-and-wife Scott and Julie Koon own this 15-barrel brewery in North Charleston. Get a taste in its upcoming taproom, then look for Snafu in area retailers and restaurants this spring. www.snafubrewingcompany.com

Twisted Cypress Brewing Co.
With an anticipated summer opening, it’s poised to be the first brewery in West Ashley. Enjoy a pint in the taproom or outside in the brewery’s pet-friendly outdoor area. www.twistedcypressbrewingco.com

Edmund’s Oast
Brewing Co. In addition to the operation serving the hit restaurant, a freestanding production brewery (and tasting room) is in the works to fill wholesale orders and pint glasses. Part of the Pacific Box & Crate development at 1505 King Street, it’s slated to open early 2017. www.edmundsoast.com