Folly Beach
July 2009
Frolicking with free spirits on the Edge of America. 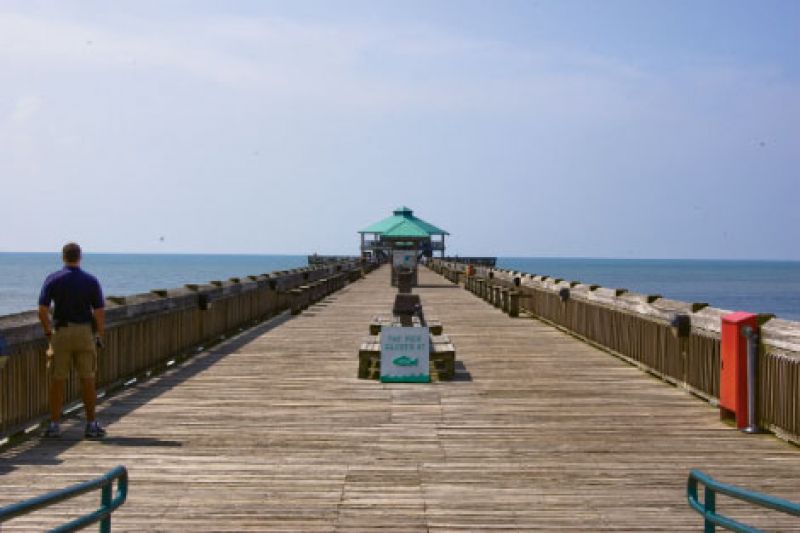 It’s hardly surprising that a spit of land with such a colorful scallywag history would anoint itself the “Edge of America,” a wink at its nonconformist spirit. What began as a marooning ground for both pirates and cholera-suffering passengers aboard boats bound for Charleston has morphed into a modern-day bohemia populated by nonchalant locals and tumbleweed surf shacks. Livin’ was easy on Folly in the 1930s, when George Gershwin and Dubose Heyward spent a summer lapping up the languid island lifestyle, which they wove into the lyrics and score of Porgy and Bess. The ’60s welcomed the creation of a Coney Island-style boardwalk complete with amusement rides, a pier, and a pavilion that saw many shagalicious summer nights beneath the stars. Although the Dancing Bear bowling alley is long gone, the hodgepodge of restaurants and businesses—most authentically beachy and untouched by fad—that line Center Street imbue the island with its checkered charm. Hurricane Hugo tried to sweep Folly completely off the map, but this hearty little island would not relinquish its dreadlocked hold on the coast. Instead, the fateful storm blew away a string of homes along a strip of beach known as “The Washout,” clearing the way for wave-hungry surfers who attest this to be the best surf spot in South Carolina.

ISLAND LANDMARK
The abandoned wooden boat—a World War II-era lifeboat displaced during Hurricane Hugo—on the causeway leading to Folly is a constantly evolving community billboard on which locals paint everything from marriage proposals to birth announcements.

LOCAL SECRET
Volunteer with the Folly Beach Turtle Watch Program, a grassroots group that keeps a watchful eye on loggerhead nests during the May to October season, and be there to witness the magic of hatchlings making their way to the sea. www.follyturtles.com

BEACH RULES: PARKING
The commercial part of the island has metered spaces. When parking on grass or sand, tires may not touch any part of the paved road, or the vehicle will be ticketed.

DOGS
Dogs must be kept on a leash at all times. From May 1 through September 30, dogs are not allowed on the beach between 10 a.m. and 6 p.m.

ALCOHOL
No bottles on the beach. Pour contents of cans into a cup or face a $500 fine.