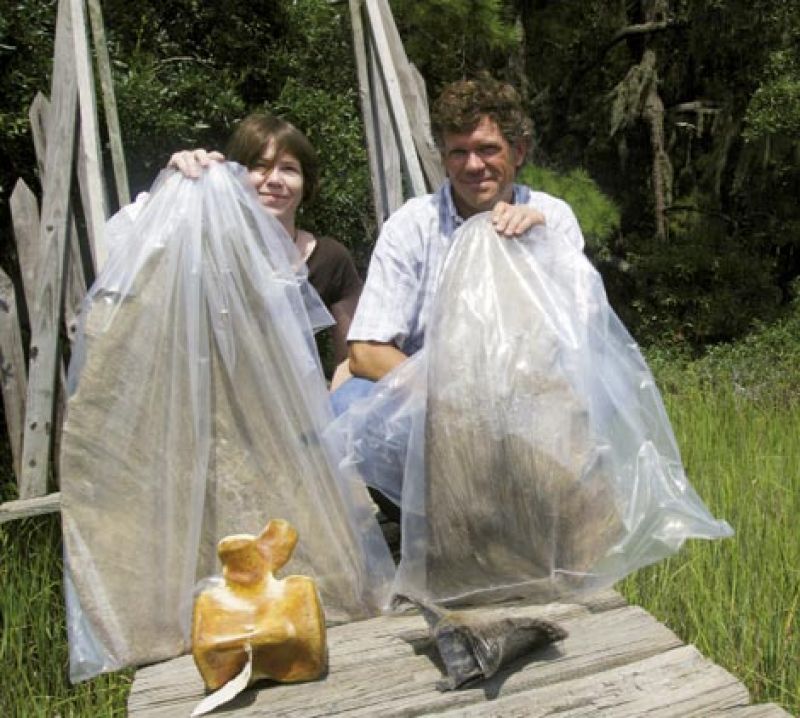 The box read “Frozen Grouper Fillet,” and from the grill to the bun, no one was the wiser. That is, until forensic analyst Trey Knott got hold of the fish’s DNA.

After a 2003 U.S. tariff went into effect on Vietnamese-farmed catfish, a few importers saw the opportunity to repackage the pond-raised fish as grouper. The fraud crisscrossed the nation’s restaurants, unbeknownst to owners, chefs, or diners. “People eating grouper sandwiches were actually eating fried catfish,” says Knott. “And all the catfish gave a false impression of an abundance of actual grouper, depressing the value of that fish for honest American fisherman.”

At NOAA’s James Island lab at the end of Fort Johnson Road, Knott and fellow biologist Kathy Moore handle the bulk of the nation’s seafood forensics testing. From recreational fishermen caught with illegal species to extensive cases of corporate fraud, the NOAA marine forensics lab is a key element in the oversight of our fisheries and the seafood industry. “Our analysis doesn’t ever finger the criminal, just what they’re to be charged with, or if they’ll be charged at all,” explains Moore.

The lab doesn’t know the details of the cases they test until the results are in, eliminating the possibility of bias. Moore recently handled a specimen that required a lightning-fast turnaround. She determined that a seized meat sample was from an endangered Sei whale. That weekend, the producers of the Oscar-winning documentary The Cove coincided their award with the bust of Santa Monica restaurant The Hump for serving illegal whale meat in their sushi. “Federal agents were literally sitting by the phone, drumming their fingers, waiting on my call,” recalls Moore.

The bulk of the analysts’ jobs are in the lab, extracting DNA from samples, amplifying it, and then processing it through their space-age looking sequencer. Hills and valleys of four-colored lines appear on their computer screen and are then matched to an archive of more than 10,000 samples kept in test tubes in -80°C freezers. Giant shark fins wrapped in evidence bags lie across a shelf, alongside a seal pelt, whale vertebrae, and bloody fillet knives and spear guns.

In its 30 years in Charleston, the NOAA lab has helped agents bust countless sea turtle poaching operations (including a circle of bodybuilders drinking the egg yolks), shut down shark poachers, and uncovered giant corporate scandals of fish meat substitution. They’re on pace for their average of about 40 cases this year, indicating a continuing problem of fraud and poaching in the seafood industry.

Knott recommends eating at and purchasing from reputable seafood restaurants and sources and being weary of deals that seem too good to be true. The NOAA lab’s work is something to think about, and to be thankful for, the next time you sink your teeth into a fried fish sandwich.