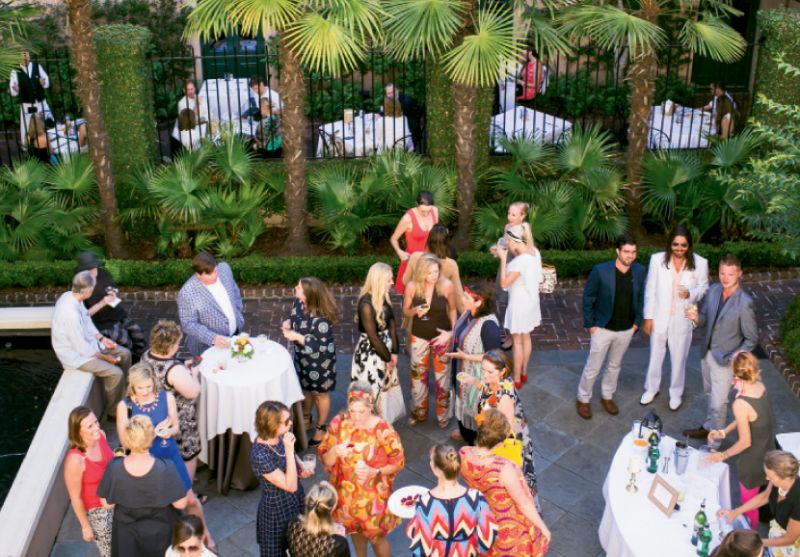 The idea bubbled up halfway through a bottle of blush wine during a local food event. “Wouldn’t it be fun to do a pop-up dinner with just females?” mused pastry chef Kelly Kleisner and freelance chef Sarah Adams, the lone rosé sippers in a room filled with beer- and bourbon-drinking boys. But make no mistake, while the instigators behind Charleston’s recent round of girly gatherings may sip pink drinks, these broads have plenty of bite.

In the food and beverage world, ladies aren’t often spotted on the line. “When a woman can hold her own in the kitchen, we proudly dub her a ‘badass bitch’,” explains Adams. And this spring, as she and Kleisner cooked up plans for a sisterhood of supper clubbers, tapping Butcher & Bee events director Randi Weinstein for the team, the saucy moniker stuck.

“There are so many boys’ clubs in F&B...we wanted to develop a camaraderie among the awesome women working both front and back of the house.” —Sarah Adams, Bad Bitches Charleston cofounder

Bad Bitches Charleston, which launched its monthly series in April, showcases female talents from both the front and back of the house during decades-themed dinners designed to engage and educate guests about women’s lib through food. From chefs, line cooks, and farmers to servers, sommeliers, and food stylists, more than 100 gals have banded together to dish up sell-out events like “1950s: Era of the American Matriarch,” “1960s Boss Bitch: Julia Child,” and “1970s: Hawaiian Luau.” Energetic Tristan and FIG veteran Nicki Anhalt serves a side of sass as the Bad Bitches’ party emcee, embodying a smorgasbord of colorful characters—from an apron-clad housewife to a hostess-with-the-mostess divorcée—to accompany multiple courses. Diners have even started savoring the fun, donning period attire like go-go boots and flowery muumuus. (Promising Cocktail-inspired libations, the organization’s next installment on July 11 will throw back to an epic ’80s dance party.)

With a different underwriter covering upfront costs for each event, the nonprofit has been able to fork over 100 percent of its ticket sales and tips—almost $16,000 in the first two dinners alone—to a continuing education endowment. When the series finishes in September, a committee comprised of the group’s founders and funders will select recipients for a host of scholarships to help female restaurant pros further their careers through certification classes, management seminars, sommelier accreditations, and the like.

“There are so many boys’ clubs in F&B,” says Adams, “so women helping women is a big goal for us.” To that end, Bad Bitches officially entered into a fiscal sponsorship relationship with the Center for Women in June. “To have an association with such an established organization helps bring legitimacy and attention to our group while providing tax advantages to our donors, especially as we start talks about expanding the series to other cities,” continues Adams, hinting at bigger plans down the line. And while she isn’t certain Charleston will be hungry for another pop-up before next spring, one thing is for sure—these enterprising femmes have developed a winning recipe for a five-star class of badass bitches.

Upcoming dates: July 11, August 16, and September 20. Event details and ticket sales are announced one to two weeks prior to each pop-up dinner on the Bad Bitches Charleston Facebook page.