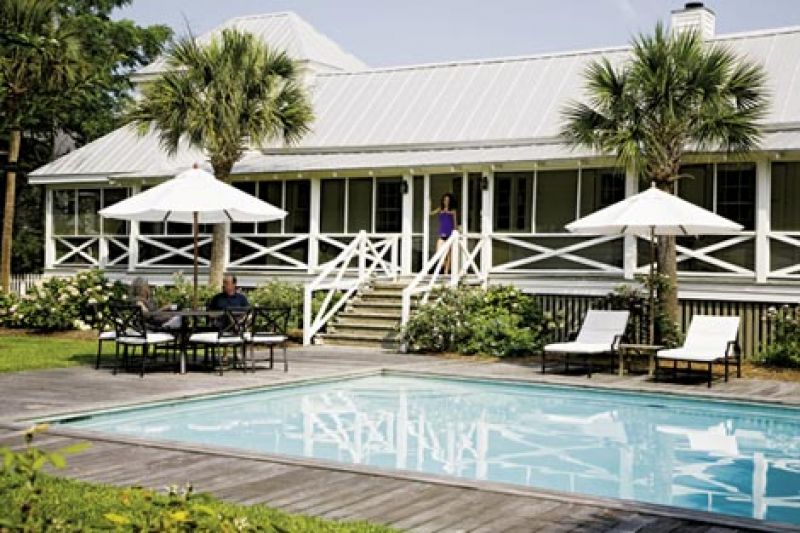 What should a summerhouse be? If you ask Charleston native Molly Hope, it starts with being comfortable in its own skin—that easy-going air a house takes on when it’s exactly as it should be. And that, she says, starts with the simplest, most basic element: “A house has to work with its climate,” Molly explains. “If that’s heat, like Charleston-in-the-dead-of-summer heat, it has to stand up to it, even allay it, or else, why stay?”

It’s not the stuff of poetry, like porches that are as fine a spot as any for a good night’s rest or well-trodden paths to the beach (though they have those, too). But it is a deal-maker, a distinction centered on good old-fashioned geography. Steadfast, sturdy walls and a swimming pool that steps off the porch are for sultry, summer days on Sullivan’s.

“I come out here and can cool down the house before I even get my bags out of the car,” says Molly. “Or if it’s breezy and mild, I can throw the doors open and get the fresh air rolling through. We can be comfortable here, and that’s more important than anything else.”

“Here” is a couple blocks off the ocean in an early-1900s beach house she bought with her husband, Steve, eight years ago. The pair, who own local antique furniture and interiors shop Acquisitions, weren’t in the market for a rambling cottage like this one, but with two grown daughters—eldest Mary Norvell had married a few years prior, Kathleen would marry a few years later—they knew the family would be expanding and wanted a big old place where everyone could flock during summers and on holidays.

Then one Easter Sunday, it just happened. “Steve and I went out to Sullivan’s after church,” Molly recalls. “We had lunch and then went for a walk. Mary Norvell was with us, and she said, ‘Why don’t you find a place out here?’ I said, ‘I don’t know, maybe.’ Then we passed one for sale, with a picket fence covered in jasmine. We couldn’t see the house well from the street, but we could see the screened-in porches. Mary Norvell said, ‘You might like that one.’ And I did. It was a classic two-story, 3,700-square-foot beach house. I looked at it the next day, and made an offer the day after that.”

Aside from cleaning out overgrown shrubs from the front yard, neatening the jasmine along the fence, and making space for a pool, the house didn’t need much from the Hope family. “The former owners had expanded the side porch to create a breezy, turreted living area and added a third bedroom,” says Molly, noting that the old heart-pine floors were in good shape, the three sets of French doors in working order, and all that southeast-facing porch? “It was nearly perfect.”

And there was another big charmer: The kitchen had been recently renovated with butcher-block countertops, a soapstone sink, and a roomy island. “We knew that would be a central place for us,” says Molly, who adds that since buying the house, she’s welcomed three grandchildren to the clan (William, five; Campbell, three, and Joaquin, six months), so there’s always someone perched on the stools while she cooks. “We live around the kitchen counter,” says daughter Kathleen.

“This room…” Molly continues, “it’s always in use. The kids can run right through it, it’s big enough so a few of us can cook at a time—my husband even uses the island as an office on summer days.”

So that perfect-fit kitchen was a big plus, which meant all the Hopes had to do to ready the storybook old beach house for their growing family was add a pair of bedrooms, a mudroom (fantastic with Belgian stone tiles), a tin roof, and a pool. “That was a must from the beginning,” explains Molly.

Looking at the house from the street, you can see why. Like many of the eastern lots on the island, it stretches from one end of the block to the other (nearly an acre), a sprawling, green carpet with plenty of room for a pool. “It’s part of what makes the outdoors so livable for us in the summer.”

Meanwhile, livability inside is as much about chilling out as it is about cooling down. “It’s not a riot of turquoise and white just because it’s by the beach,” says Molly, but rather, a practical, handsome mix of their signature antiques, like Heriz and kilim rugs, a sycamore-top dining table, an English pine buffet, and a “triple-wide housekeeper’s cupboard made of poor man’s mahogany—in other words, somewhere, somebody painted this piece to look like mahogany,” says Molly.

“These things are here because they’re part of how we live,” she explains, pointing to their long dining tables as an example. “Both of them—the one inside and the one out on the porch—are eight feet long. It’s not so much about fitting the house or the location, but about fitting us.”

And just how do these antique gems work in a rollicking, come-as-you-are beach house? “Think about it, what’s more durable?” asks Molly.

“We may have to move a vase or a bowl out of the kids’ reach,” says Kathleen, “but basically, this is a house kids can run through, salt air can settle on, and it’ll be okay.”

Of course it will. The trusty two-story summer home stood up to Hugo, after all, which is just more proof there’s no identity crisis here. It’s got a knack for surviving—and thriving right where it is.
As for its owners?

“It’s all pretty simple,” Molly says. “When it comes to our things, they don’t need to look like sand and sea. We’re there. A good summerhouse just needs things like comfortable chairs, a table to set your drink on. You live in it, you use it, and you don’t worry about it.”