By the Light of the Moon

By the Light of the Moon
WRITER:
Melissa Bigner
Hugging 1,000-plus-year-old trees one night at the Francis Beidler Forest 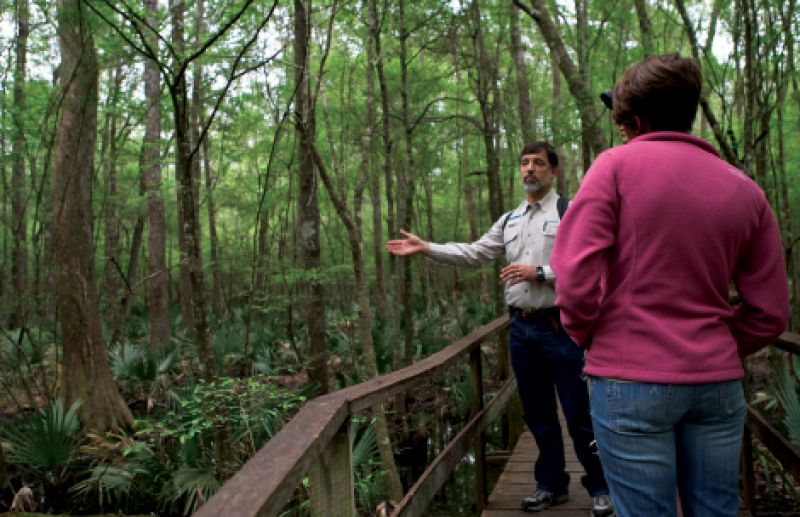 A few years of Sundays ago, the Rev. Philip Bryant addressed the French Huguenot Church congregation with a sermon about silence. He talked about joggers running with earbuds and iPods; cars thumping with rib-rattling bass; and kids gaping at DVD players in the backseats of SUVs. What, he posed, are we afraid of in the silence?


That what’s called to mind as I queue up on a dark boardwalk for Beidler Forest Center director Mike Dawson’s monthly moonlit walk. He’s telling us—a motley crew of folks who came to Harleyville to wander this part of the Four Holes Swamp by the full moon—to break into small groups and stagger our return back to the main building so we can experience the flooded forest in silence. I’m solo and last, save for an intern who for legalities’ sake has to trail along as the caboose. She’s one of those speak-when-spoken-to types, so it’s nearly as good as being on my own. And as for that silence? Well, turns out sans iPods, sans speakers, and sans movies, the swamp is silent like a rural highway is silent—quiet till a swell of noise wells up (like cars rushing by) then overwhelmed again by quiet.


It’s been like this the whole evening—bugs clicking, mud popping, and cypresses and tupelos creaking to each other, cracking open the night air and speaking an ancient language we can’t translate. This pocket of trees happens to be one of two old-growth stands in the state, meaning they’ve never been cleared or otherwise altered by man. Halfway through the walk, Mike explained that the oldest cypress here—a bit tired-looking and scrawny, at least compared to her whippersnapper neighbors—is nearly 1,600 years old. I stared through the dark at the gal in question, unmarked for her own protection. Who, or what, could stand here since 400 A.D. and still be a looker? I reached out to rest my palm on the tree’s side, hoping to give a little reverence and catch some sort of vibe, too. As I stood there, a little odd-bird-out petting the tree while the group circles Mike, he told us that the roots of these brilliant trees span out shallow but far—the length of a football field—and send up stumpy knees that act like tent stakes, which speaks to their longevity.


By the light of the moon that’s risen since Mike started schooling us, the trees seem stoic and shifty both as starry clouds of lighting bugs outline branches with their flashes. Feeling like we’re moving through a Clay Rice silhouette, the intern and I approach yet another huge cypress. She whispers that I can crawl into its hollowed out trunk if I’d like. Now, this comes after an hour and a half of Mike talking about swamp creatures, the hidden spots in which they lurk, and their heightened senses. He’s told us bobcats have grapefruit-sized heads and human-scale eyeballs with so many light-absorbing rods and reflective qualities that night vision goggles can’t come compete with. He’s said a fox’s wet nose draws in humid swamp air that carries a more telling map of prey than dry air. And apparently a raccoon’s sense of touch is as sensitive as ours (woe to the crayfish it feels out in the mud); snakes “taste” the air with their tongues and use a sixth sense—infrared heat sensor—to detect potential food; and a bat’s cupped ears and chirping allow it to play super-sonic hide-and-seek in the dark as they snatch dinner from a branch-and-leaf tangled airscape.


Then, after showing us how to spot water spiders (shine a flashlight near tree roots and look for the shimmering emerald chips that are their eyes) and ’gators (same thing, but scan for rubies), he lit into describing the barred owl—aka the banshee the intern and I hear a few yards off as I stare into the tree trunk I am about to climb into. The owl who is caterwauling and hollering “Honey, I’m home!” to its mate. The owl with a head the size of an orange and walnut-sized eyes more light-sensitive and reflective than any cat in this hood; the owl with silent wings, needle-like talons, and offset ears that pinpoint sound like a radar.


These are the things I think of as I creep inside the cypress. And there, in a trunk barely lit by a full moon, I am just another little soft something seeking shelter. A little something hugged first by an old, old giant and then by occasional lapses of golden silence. Thrilling, the lot of it.