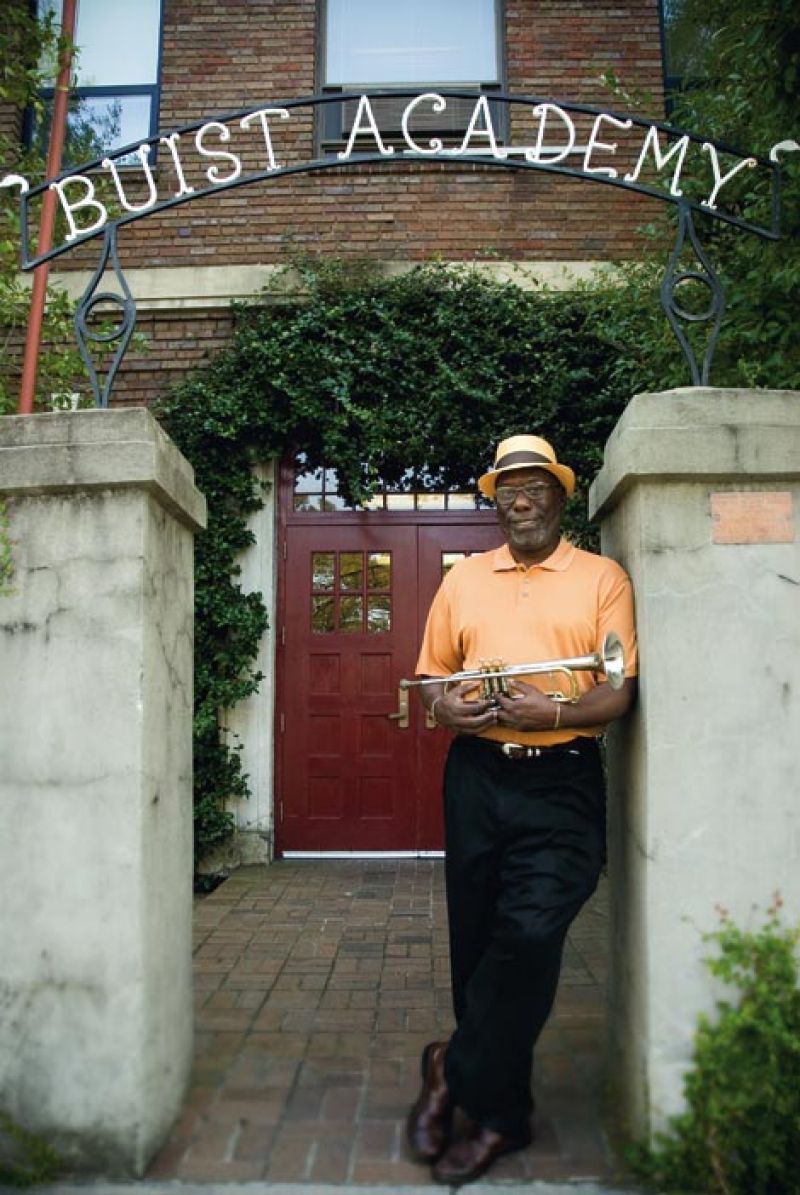 He’s the hepcat with the cool brim and the warm smile; a raconteur ready to regale anyone within ear shot with tales of Charleston’s jazz men. The total embodiment of musician, promoter, writer, radio host, advocate, and scholar, Jack McCray is an alchemist who has distilled the elements of an art form into lifelong discovery. In short, Jack McCray is jazz.

The Charleston native’s journey began with an instrument and thoughtful parents, who were perceptive enough to pick up on their son’s natural proclivities. “I was fortunate coming from working-class folks,” says McCray. “We didn’t have much, but my parents did put in an old upright piano.”

Ditching the keys—considered a bit soft for a young man in those days, he says—McCray picked up the trumpet, an instrument with a little more muscle. As a freshman in 1961, he auditioned for the Burke High School band. A feat for any aspiring youngster, his selection to this prestigious group signaled his arrival as a musician and set a course on which he continues to this today.

During his junior year, McCray moved to New York City to attend the Brooklyn Friends School, where he entered a more challenging academic environment and, as a result, laid the trumpet aside. “In hindsight, I can say it’s cool because I’m still into music,” he says, reflecting on this transition from musician to scholar, “and I’m still making contributions to it.”

After attending Claflin College and Shaw and Central Michigan universities, McCray returned to Charleston during the height of the Civil Rights movement. “In a lot of respects, given the way this country and this region evolved, it was the ‘bad old days,’” he says, “but aside from that, I had a great upbringing, and I really loved my hometown and the people here.”

It is well-documented that musicians were among the earliest professionals in America to be integrated, and, according to McCray, Charleston was no exception. He recounts how Charleston natives such as Fud Livingston, a white musician and composer who toured in the 1920s and ’30s with Benny Goodman, would return to town from the Northeast and Midwest to check out the local black guys and share with them what he had learned. “In music, particularly jazz music, there was always this constant exchange,” McCray says. “When I was a kid sneaking into bars, the jazz bands were usually integrated.” Music is a great equalizer, he says, adding, “there weren’t too many other opportunities to see that in South Carolina 50 years ago.”

Throughout the 1970s, McCray worked in a variety of “helping professions,” such as an administrator for community health and substance abuse programs and as a consultant to the U.S. Department of Education, all the while dabbling in arts presentations, poetry readings, lectures, and radio. In 1980, he donned his producer’s cap, cofounding the Piccolo Spoleto Jazz Afterhours series. Soon thereafter, in partnership with Osei Chandler, he coproduced and hosted the Wednesday Night Jam Session, a live jazz radio program on WSCI-FM (now ETV Radio.)

Longtime collaborators and friends, McCray and Chandler first met in 1979. “Jack said he was twirling the radio dial and heard John Coltrane and was blown away,” says Chandler. “That evening, I invited listeners to come by the studio on Broad Street. Jack did, and we instantly hit it off. I mean, there weren’t many folks one could share with about ’Trane, Sonny Rollins, and Sun Ra. Jack became a regular, cohosting on a steady basis.”

This partnership continued with Chandler’s program Roots Musik Karamu (the longest running Caribbean music program on the East Coast). McCray adopted the moniker “the Roots Rapper,” making Roots Rap a regular feature of the show and adding a cultural education component to the program. “He inserted two to four minutes of talk within the music format—stuff like Marcus Garvey’s or Haile Selassie’s role in Rasta cosmology; the relevance and history of dreadlocks; or an analysis of dub or irie, words from the Rasta lexicon,” says Chandler.

The Chandler-McCray duo also created for the city’s Piccolo Spoleto Festival the Group for Integrated Studies (GIS), which produced 14 events in 10 days, including the first reggae event in Charleston at the Gourmetisserie, a food court formerly located on Market Street. The GIS introduced artists such as Denroy Morgan and the Black Eagles and avant-garde jazz, including Carlos Garnett and the Universal Black Force. “These music forms were new to Charleston,” says Chandler, “to say the least.”

More importantly, according to Chandler, “the GIS created real jam sessions with Charleston musicians who had been working as school teachers and administrators, as cab drivers and hotel workers, even some retirees.” Chandler beams with pride, recounting how he, McCray, and the GIS “put these artists to work right here in Charleston in venues accessible to the citizenry—and did they jam!”

From the mid-1980s forward, McCray continued his advocacy for Charleston jazz and African American culture in the Lowcountry, serving as the founding president of the MOJA Arts Festival, an annual celebration of Caribbean and African American culture produced by the City of Charleston Office of Cultural Affairs. Shortly thereafter, he took a job with the Post and Courier, where he works today as a writer, critic, and copy editor.

Though not a tenured academic, McCray is an astute and meticulous scholar. His résumé may reveal a rambling array of jobs, but drill down into the minutia and a singular purpose arises—documenting, preserving, and promoting jazz. Recent film projects include working as script consultant for Song of Pumpkin Brown, a film by Charleston filmmaker Brad Jayne, released in 2007; producing the Franklin Street Five, a Jenkins Orphanage tribute modern jazz band led by Quentin Baxter; and currently working as a consultant with Charleston filmmaker Kevin Harrison on a documentary on the 2007 ChazzFest.

The project now shaping McCray’s research, though, is the Charleston Jazz Initiative (CJI), a program of the School of the Arts at the College of Charleston, which records the African American jazz tradition in the Lowcountry and its diasporic movement throughout the United States and Europe from the late 19th century through today. Codirected by McCray and Karen Chandler, a professor of arts management at the college, the initiative began in 2003.

Describing her collaborations with McCray, Chandler says, “You always walk away having learned something—a new perspective on an old issue. It’s hard to describe his vision and energy.” Chandler, much like Osei and others who know McCray, reflects on the man as a whole person. “He writes brilliantly, then steps out on the town to a jazz bar, and then goes home and takes care of his mother,” she says. “He’s one fine human being. He’s pretty magical.”

In 2007, Arcadia published McCray’s Charleston Jazz, the first illustrated history of jazz and jazz musicians in the city. Compiling photographs, oral histories, posters, programs, sheet music, recordings, and interviews, the book anthologizes more than 200 vintage images along with commentary concerning Charleston’s place in the creation and evolution of jazz. Importantly, it tackles the question—is Charleston the cradle of jazz?

As an author and social historian, McCray makes a strong case for the port city, where upwards of 40 percent of enslaved Africans were imported to North America, bringing with them the style and substance of uniquely African modes of creation—syncopated rhythms and the bending of notes, call and response chanting, and a deeply ingrained propensity to improvise. In Charleston Jazz, McCray breaks the lineage down thusly: “From enslaved African drummers, to black drummers attached to white militias, to military bands, to community brass bands, has come Charleston jazz.”

McCray argues that Charleston, though not the sole incubator of jazz, played a seminal role in its development. He explores the roots of improvisation, rhythmic structure, and even democratic principals, carried over from African culture into Colonial America and infused into early American musical forms. Placing the importance of the genre in context, he writes, “For Charleston, jazz is just like the distinctive taste of okra soup, the plaintive cries of the early-20th-century street vendors, and the meticulous artistry of sweetgrass baskets.”

It’s McCray’s hope that readers will take away from the book some recognition of the importance of Charleston natives in the birth of jazz. “If they come away just believing that there is, in fact, an evolving history that continues to today, I would be very, very gratified,” says McCray, “and the gravy on that rice, to use a Charleston metaphor, would be to get a bit of color—to know who the people were, to have some idea of their collective contributions.”

Beyond the Lowcountry, McCray views jazz as a larger metaphor for America. “It’s democratic in that everyone gets a chance to say his or her piece,” he says. “It gives cause for individual expression, and individualism is a very important American trait.”

Reconciling the democratic nature of jazz with what he calls the earlier “dark days” in Charleston, McCray, while reflective, is personally at peace with the Holy City and its inhabitants. “I really love that I continue to learn about the city, what makes it unique, and the contributions of its people, musically and otherwise,” he says. “Charleston is up-and-coming, and it’s kind of cool to be a part of that. It’s starting to be much more hip now as things are getting sorted out.”

Jazz musicians are a breed apart in McCray’s mind, as it seems to him that people interested in the genre tend to be a bit more open-minded and progressive than a lot of others. “I think it has to do with the whole notion of self-expression, exploration,” he says, “and it’s just cooler when it’s shared.”

Though research and documentary fieldwork are important to McCray, his most vital concern is for the continuation of live performance. “There’s nothing like the energy that comes from a musician and goes back to the musician from an audience,” he says. “So I beg people, go see live music, jazz, whatever you like. Talk to the people who own and run the places you go to, and if they don’t have live music, encourage them to get it.”

At the end of the day, McCray speaks of music and musicians not as academic source material, untouchable heroes, or even part of a jazz canon, but as personal friends. “I not only love the music, I love the people who play it,” he says. “And if we don’t take care of them, things stop happening, man.”