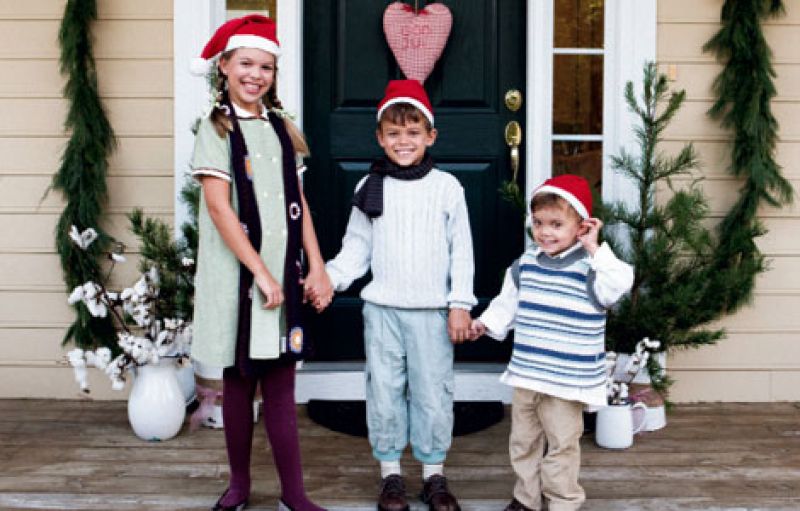 The overnight haul is something slightly epic for a Dane.Think about it: If Rikke were to travel for the same time (about five hours) inDenmark, she’d end up in another country. But she’s willing to go the distancehere to cook up a real Danish Christmas. That’s because like most Danes, Rikkeis serious about the holiday and serious about maintaining tradition.

But the start of this, the Fryman Danish-American Christmas,began on a very light foot—in the U.S. Virgin Islands, no less. Back in theearly 1990s, Rikke took a gap year between high school and college as an aupair on St. Thomas. There, the then-18-year-old fell into a love-at-first-sightromance with then-20-year-old Bill Fryman, an Illinois-raised college studenttaking a break from his studies back in the States. When both had to return totheir respective homes and schooling, they struck up a several-years-longaffair fueled by love letters galore. “This was before e-mail really had takenoff,” says Bill, “and phone calls were so expensive.”

Sick over the miles between them, Bill finally decided to“visit” Rikke in Copenhagen, where he moved and eventually proposed. “I fashioneda little ring out of copper wire I found in the basement,” says Bill, “thenwith a bunch of red roses, I got down on my knees and said, ‘Hey, do you wannaget married?’ She actually said, ‘Yes!’” Within days they wed at City Hall in atiny ceremony, December 18, 1996. Bill’s parents hopped the first flight theycould book to join the newlyweds, and so it came to be that Rikke and Billspent their first married Christmas with both families in Denmark.

A word about the winters in Copenhagen: The cold creeps inaround September and grips the city through April. And while the famedlight-filled summer days linger forever, dark winter nights seem to lastlonger. Come November, the sun rises around 8:30 a.m. to cast its paltry, greylight until 4 p.m., after which the dark—real dark—sets in. Given the bleaknessof winters there, Christmas is a big deal. “When you have eight months ofdarkness, the holiday lifts up your life,” explains Rikke.

Thus Danes herald the Christmas season starting December 1,when kids open their first daily Advent gift. “It can be something as small andsimple as a wrapped pencil,” Rikke says, “anything to get the kids excited andout of bed on those dark mornings.” Grade-schoolers take turns hosting theclassroom nisse (or elf) at home, and report the stuffed creature’s adventuresto their teachers and fellow students the next day. Throughout the month,families fashion julehjerter, little paper heart ornaments that Hans ChristianAndersen made popular in the 1860s; bake heart-shaped cookies to hang inwindows; craft sweets from marzipan and nougat; and each Sunday leading to theholiday, light Advent candles.

“We’re lucky,” says Rikke.“Denmark’s had a longer era ofbeing unspoiled. Christmas for Danes has always been a very rustic, basicthing, where you didn’t have to go get new ornaments that matched every year.You made your own decorations and the next year you added a little more. Ofcourse, as with everywhere, things are becoming more commercialized, but atleast here in our house, we’re trying to hold onto the bare, minimalistholiday. That’s the Scandinavian holiday I grew up with—the one where you justneed the candles, the real tree, the homemade things.”

Just over two years ago, the Frymans decided to move fromCopenhagen to America. Twelve years into their marriage, they had three smallkids and craved a change from their urban lifestyle; plus, they wanted tointroduce the young ones to their dad’s culture. Given that Bill’s parents hadhomes in the Lowcountry, Charleston became the obvious choice. The family movedto Daniel Island, where Rikke works from home translating TV shows into Danishwhile Bill’s at Blackbaud as the company’s marketing manager.

“The only thing besides my family and friends that we reallymiss is the snow,” says Rikke. “Our kids still ask, ‘When is it going to snow?’I don’t have the heart to tell them, ‘Well, never, honey.’ But it’s not so bad;instead we have this amazing light and weather where you can have Christmasdinner and then you run outside and play soccer.”

“Really, our holidays haven’t changed much,” she adds, “because as a couple from two differentcontinents, you become part of two cultures, part of two continents, part of twoways of celebrating Christmas. We’ve modified things for years; for example,Santa does come here on Christmas Day, unlike back at home.”

“But he only brings one gift, small enough to fit in astocking,” adds Bill. The kids seem to be more than okay with that. Ask10-year-old Audrey her favorite part of the holiday, and she doesn’t evenmention presents. Rather, aside from gushing over the homemade rye bread andcrafting, she beams about the tree. “I love dancing around it,” she says, “andsinging.” Audrey and Rikke launch into a little song about a nisse and a mouse,hopping at key points in the tune. Speechless, Audrey’s spend-the-night schoolfriend stares and says she wants to come to the Frymans’ for Christmas. Seemslike the real spirit of the holiday, the simple, infectious one, is alive…witha Danish accent.