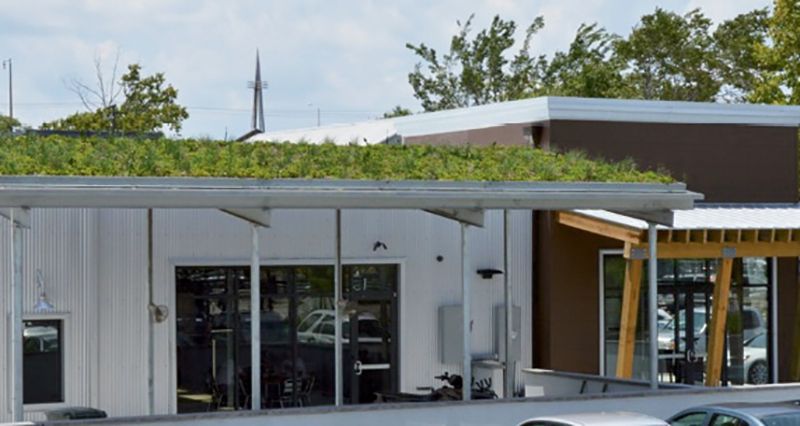 It’s taken a few years for green roofs to take root in Charleston. When Michael Whitfield launched Green Roof Outfitters (GRO) in 2009, he met hesitation in his architecturally conservative hometown. But slowly, after years of successful projects across the country and globe, Whitfield’s green roof systems have cropped up on tech firms, schools, and hospitals here in the Lowcountry. “And a lot more are on the way,” he notes.

Green rooftops have been around for centuries—think turf-covered Viking longhouses—but only in recent decades have their economic and environmental benefits prompted renewed interest. Planted with everything from drought-tolerant succulents and grasses to flowers and edibles, modern green roofs can dramatically decrease storm-water runoff, lower energy costs, and even make the roof itself last longer.

When Whitfield first learned about green roofs a decade ago, “There wasn’t anything that was affordable and easy to install or that worked well in our environment,” he says. The Citadel-trained engineer and entrepreneur got to work on a solution. After two years of research and testing, his first design, GRO was born.

Made in South Carolina from recycled plastic, the modular green roof systems are used mainly for commercial projects and flat-topped homes. However, DIY-ers are in luck: SiteOne—formerly John Deere—is now selling GRO products nationally. You can special order the modules empty or already filled with plants. Green Roof Outfitters recently debuted a line of green wall products and also sells Ipé deck pavers. “As a smaller company, we can react quickly to the market needs,” says Whitfield.

Oyamel: The hip Mexican restaurant in Washington, D.C., is crowned by a kitchen garden that hosts herbs and micro-greens.