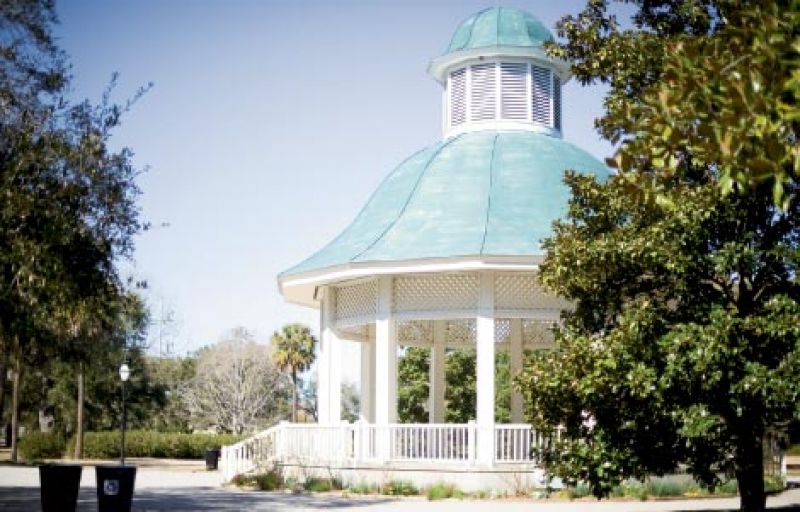 A revamped version of the bandstand built for the South Carolina Inter-State and West Indian Exposition (December 1901 to May 1902) now presides over the east edge of sprawling Hampton Park.

They say familiarity breeds contempt, but in the case of Hampton Park, I found that the adage operated in reverse. Let me begin by saying that when I first moved to Charleston, I crashed at my mom’s place on Church and Chalmers, where I got mighty accustomed to waking to clomping horses and creaking carriages. And later, when I rented between Colonial Lake and the Ashley River, I absolutely reveled in the water birds that glided overhead. Loving that I could be at the water in moments, I told a then-beau I could never live outside 29401.
That brings up another adage—the “never say never” one. When it came time to buy my own home, there was no way I could afford anything in my favorite zip code. So eating crow came next, and I was lucky enough to find a cottage north of the Crosstown and a little below The Citadel. As swell as the setup was, I missed looking out my windows to a sky zippered with chains of pelicans, and I sure couldn’t make it to the water on a morning stroll.
So to bond with my rough-around-the-edges new turf, I’d pull on my running shoes and head to nearby Hampton Park. I’d long known the history of the park: from 1792 to 1882, it was a horse track; during the Civil War, Union soldiers were imprisoned—and buried—on site, and after the 54th Massachusetts liberated Charleston in 1865, they took part in a parade of thousands of freed slaves there for what’s considered the country’s first Memorial Day celebration. In 1901, the land was transformed into the South Carolina Inter-State and West Indian Exposition (today, only the bandstand remains); soon after, John Charles Olmsted, son of famed landscape architect Frederick Law Olmsted, designed the bones of the park we know today. In the 1930s, a zoo opened and stayed until 1975.
More recently, the spot has been sculpted into a verdant gem hidden from tourists and 29401-ers alike, and yet acknowledged—by city officials, long-time Charleston residents, and green-thumbers—as the crown jewel of the City of Charleston’s park system. The Noisette roses there have been the subject of DNA studies to determine just how antique the varieties are; walk-and-talk retirees hit the mile-long outer track while par course fans and stroller moms wander the meandering trails. And on some nights, Citadel cadets don fatigues and crawl around in training sessions that scare the mess out of neighborhood newcomers like me.
I learned all this during my morning treks. Because for all the spoiled disdain I showed the “everyday” songbirds at first, for all the contempt I felt for the pines (“inland specimens,” I falsely scoffed), I fell hard for the place. On the north side, an allée of crepe myrtles hosts a ton of little spider webs; when the dew is heavy and the morning sun hits, the webs look like a million swaying fairy hammocks. The live oaks near the stables might as well form the walls of a cathedral the way shafts of light spill in. And when the tulip magnolias bloom with flowers that peek from a mantle of Spanish moss, it’s pure glory. Bloom where you’re planted, indeed.