Start Me Up
September 2006
Callie’s Charleston Biscuits: Taking the “bread of the South” to a whole new level 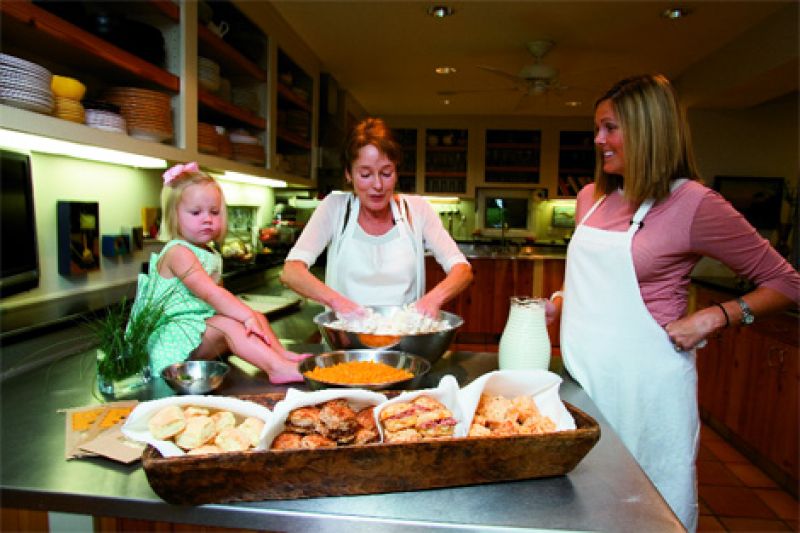 “Timing is everything,” claims Callie White. As a seasoned caterer and master of meticulous event planning, she would know. Timing can mean the difference between a ruined recipe, meal, or party and a seamless, enjoyable evening. Timing can also be a key ingredient for a successful business launch, as White and daughter Carrie Bailey-Morey are discovering. Fortunately, all those years of serving entrées at the perfect moment seem to be paying off.

When this mother-daughter duo decided to launch a gourmet biscuit company last year, the time was right for each of them, but for different reasons. Bailey-Morey had worked in sales for a New York Internet start-up and was now home with her first child, but realized she wanted a creative endeavor to balance full-time motherhood. And White had reached the point where orchestrating the food for big parties—such as actress Reese Witherspoon’s wedding—was wearing her out. “Mom’s signature ham biscuits had always been a huge hit, and we knew they froze well, so I pushed the idea,” Bailey-Morey says. “‘Okay, Mom,’ I begged, ‘Here’s your retirement plan.’”

Though long days spent baking thousands of ham, buttermilk, cinnamon, and cheese biscuits from scratch may not sound like a retirement plan, both Bailey-Morey and White (who still does limited catering) have enjoyed cooking up their new family business. They’ve collaborated on everything from fine-tuning the packaging process to choosing a label design and have learned to play to each other’s strengths. “Basically, she bakes and I sell,” says Bailey-Morey, who also dons an apron on baking days, hand delivers their buttery goods to Lowcountry stores, and ships online orders. “I always thought that I’d eventually have my own business, I just didn’t know what the niche would be,” she says. “I never imagined it would be my mother’s biscuits, but I love it! I wake up at four in the morning because I’m so excited.”

While Callie’s Charleston Biscuits are selling well in the Southeast, the timing seems right to roll out homemade Southern biscuits on the national scene. “Southern food is in the limelight, and Charleston is at the forefront,” says White. “It’s our moment to strike while the Southern enchantment is hot.” The beauty of these biscuits is their simplicity, according to the expert. “The trick is to use the best ingredients and not mess with them too much”—which sounds like equally wise business advice, especially if you’ve got a delicious idea.