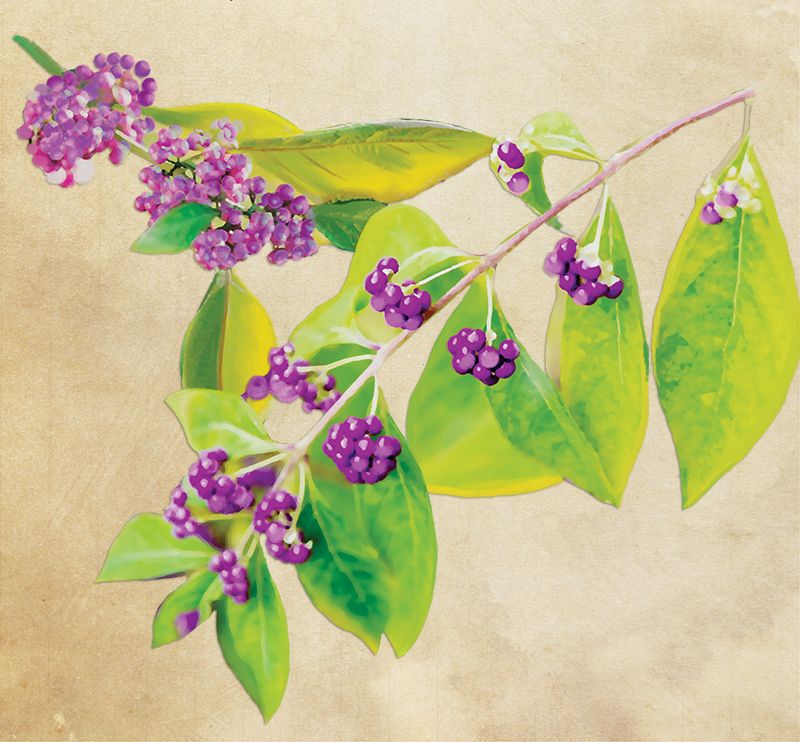 The American beautyberry (Callicarpa americana) is one of the most colorful features of our Lowcountry fall. Also known as French mulberry, its explosion of iridescent berries makes this deciduous shrub a delightful garden ornamental, while the berries provide an important food source for birds and other wildlife. Read on to take a closer look at this vibrant stunner, known for its medicinal properties

CREDIBLE EDIBLE The nontoxic berries are edible. When eaten raw, they have an astringent taste (thus, another common name “sour bush”), yet they cook up into a delectable jam or jelly, and, like elderberry, can be made into a light, rose-colored wine.

FEATHERED FAVORITE The American beautyberry is a prolific seed producer and a coveted food source for some 40 species of wild birds, attracting cardinals, mockingbirds, finches, woodpeckers, and more. The shrub itself—which is bushy, thick, and can grow up to nine feet tall—provides natural protection for a variety of birds as well as small mammals.

FARMER’S FRIEND In the old days, freshly crushed beautyberry leaves were placed beneath horse and mule harnesses so the oil would ward off horseflies and other biting bugs. Likewise, farmers placed the leaves in stables and barns to keep insects at bay.

MAGENTA MAGIC A member of the verbena family, the scientific name Callicarpa is derived from the Greek callos carpos, meaning “beautiful fruit.” In the spring, blooms of small white or pink flowers attract butterflies. During the summer, they develop into clusters of green berries that turn a brilliant magenta come September and October.

NATIVE NUTRIENT Native Americans have traditionally used the plant’s roots and berries for medicinal purposes, boiling them into teas to treat fevers and other maladies. Today, experiments on its medicinal properties continue. One demonstrated that a compound in the leaves strengthens an antibiotic’s ability to fight staph infections, specifically the drug-resistant MRSA, or methicillin-resistant Staphylococcus aureus

SKEETER STOPPER The oil in the leaves has long been said to work as a bug repellent. Recent scientific studies by the US Department of Agriculture not only isolated various beautyberry compounds effective in repelling biting insects, but one, callicarpenal, proved to be as effective as DEET against mosquitoes. Other tests found the compounds also fended off ticks and fire ants. 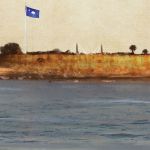 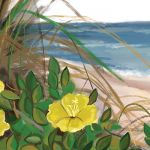