Second Nature
WRITER:
ellen mcgauley
A Mount Pleasant pair swaps the hustle of suburban life for the hush of the rural Stono marsh 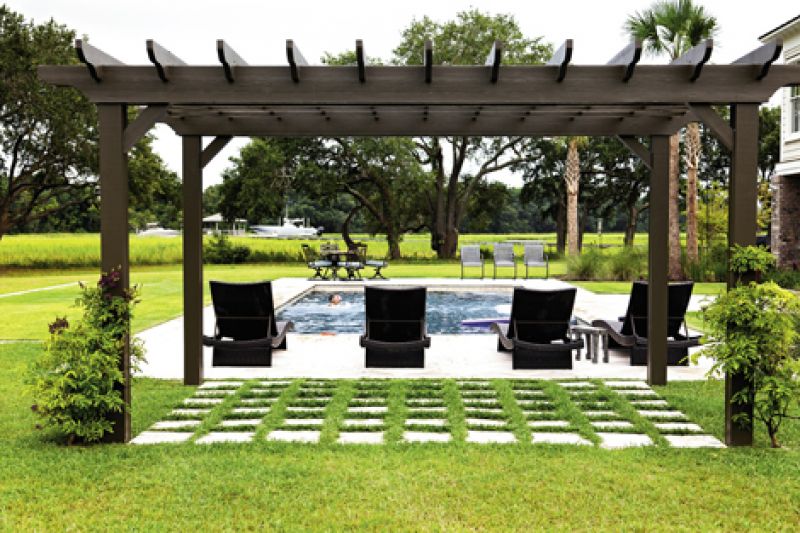 For Katie and Rick Link, the quiet, rural life started as an experiment. The John’s Island cottage they bought—a no frills “Lowe’s Special” they snapped up for a song—was a place to dock the boat, an easy escape from the Mount Pleasant ’burbs on weekends. And just maybe, they thought, a place that they could rent out half the year if it ended up sitting empty.

After all, neither really fancied themselves the slow-down, out-of-town types. “We just weren’t rural people,” says Katie. “But Rick loves his boat; we saw the dock, the marsh view, and the price, and said, ‘Let’s give it a try.’”

“It” being the 1,800-square-foot cottage and acre and a half of marshfront property down River Road. The house had a screened porch, three small bedrooms, and just enough kitchen to get them by. Rick worked on the dock and his boat, and Katie planted a garden.

And before they knew it, this part-time pad had become second nature. “It was funny how it happened. One day it just dawned on us that the minute we’d free ourselves of responsibilities at home, we were gone. We were throwing the dog in the back of the car and high-tailing it out to the cottage,” she says. “Boating season or not—we just wanted to be out there.”

One year turned into two, two years into five, and what began as an experiment looked more and more like a place to hang their hats—for good. The only downside? After nearly a decade of visits long and short, that little cottage on stilts was working harder than ever. “Nobody had any privacy,” says Katie. “When we had guests, they all shared a single hall bath. Besides the dock, the back porch was our favorite place to be, but it got crowded quick; people and guitars were always jammed right up against each other.”

So the more the pair warmed to the idea of trading suburban life for permanent residence on the island, the more they kicked around remodeling plans. But nothing worked, nothing stuck in these attempts at modest reconfiguring. If they were to move here—really move here—they decided, they’d rebuild. The new house would be a bit bigger, more open, and better suited to the pair who’d found their spot.
“Once they decided to really live out here, Katie’s main concern was preservation,” says interior designer and longtime pal Luann McCants, who happens to live a few driveways down and has kicked back on that crowded porch more than a time or two. “Katie didn’t want to erase any of the things that made them so happy out here.”

There was little chance of that, considering the dock, the oaks, the marsh air, and freshly planted beds for Katie’s “101 Garden”—“for people like me who can only manage zinnias, hot peppers, and herbs”—weren’t going anywhere.

Still, Luann knew what her friend was getting at—to get it right a second time, they’d have to bring back the nuances, the charms of the first house (since donated to the Harmony Project, which exposes underprivileged children to the study and practice of music). For instance, says Katie: “I loved that in my little cottage, I could walk out of my bedroom and see the outside in every direction. There were plenty of windows; the house had a certain kinship to the natural landscape that was important to me.”

To that end, Luann and builder Brendan McDermott of BMD Construction worked with Katie and Rick to shape up a 2.0 version of that little house. This one would have four bedrooms instead of three, more open spaces to maintain uninterrupted views (and keep guests together), and of course, a larger back porch.

Luann recommended an earthy, neutral palette on the walls—“porpoise tones,” she calls them. “Some people think that repetition of color doesn’t make a statement. But our inspiration was outside, so the color needed to enhance that, not draw attention from it.”

To reinforce the connection between indoors and out, she and Katie also opted to stain the screened porch and interior floors the same color; plus they minimized architectural elements and added natural materials into the details, like the dining room sconces Luann designed from dried marsh reeds. “As the house took shape, we kept dialing back instead of adding more,” notes the designer. “It had views we didn’t even anticipate, which made us appreciate what was already there and leave well enough alone.”

Katie attributes this, at least in part, to the new house’s slight reorientation. “We rotated it to better frame the marsh and built it closer to the street,” she says. Along with more light, this gave Katie and Rick a bigger backyard.

They worked with landscape architect Sheila Wertimer to create an outdoor living area that would meld well with what was already there (such as the stately row of oak trees lining the marsh bank). “The landscaping was very important to me,” says Katie. “I figured, we’re building this nice new house, but this is John’s Island. It’s a mixed bag out here, and I like that. That’s part of its identity.”

So Katie and Rick shunned formal in favor of simple and vetoed vibrant beds in favor of a near-seamless expanse of rolling green lawn. They also added a 16- by 36-foot rectilinear swimming pool parallel to the house, travertine decking, and a brown wood pergola that mimics the hue of all those surrounding trees.

It’s an unfussy, uncomplicated design—fitting for Katie and Rick. “I wanted so much for this house not to be trendy, which is probably impossible. But the more we relied on the outdoor elements, the more I felt I’d still love where I live in 20 years.”

And what about that dock? Remember, it was the original pull, the catalyst that drew them out to the island in the first place. Well, that 10- by 10-foot crabbing dock at the end of the boardwalk has come a long way—its renovation was the first thing Rick tackled after the papers were signed. He replaced it with a covered pier head for all the breezy afternoons they’ve come to live for on the island.

“You can’t stay inside too long out here—you need the fresh air, especially near the end of the day,” says Katie. “And to me, sitting on a dock is the biggest luxury in the world. It doesn’t get any better.”