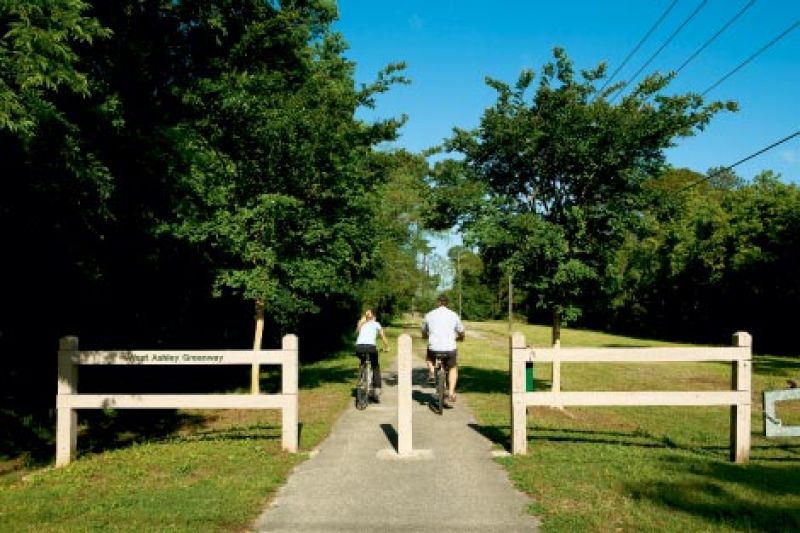 I’ve been thinking about courting lately. Joggling board-style courting with chaperones and slow, public getting-to-know-you times. I’m pretty sure it’s because the C.E.O. of my personal board of advisors (aka Mom) recently called me to check in on my budding beau. “Now I know you’re 40, Melissa, and not 15, but…what do you know about him?” Well, I told her, we’d just biked for a half day in West Ashley—“That’s good, biking, very good,” she interrupted—and I’d culled some details on him that I could share.

Had it not been for the West Ashley Greenway, I am honestly not sure I would have known so much about the man. There’s something about modern dating with movies and go-go-go that makes it easier to bond more superficially than substantially, unless you make a concerted effort. But we started off on a different foot (or pedal).

The jaunt came to be because I’d been dying to explore the rails-to-trails stretch that starts behind South Windermere Shopping Center. It’s a former railroad track bed that parallels Highway 17 for 10 or so miles—from Folly Road to Main Road out toward John’s Island—that was converted into a greenway for biking and hiking as part of a larger movement that began in the 1970s. The first few miles stretch behind little cottages and are pretty charming.

Beyond that, though, I wasn’t sure what would come, as I’d been hesitant to explore it too far on my own thanks to a newfound maturity that keeps me cautious when it comes to playing Little Red Riding Hood in the woods. But when my mister proved gung ho about sporty adventuring, we loaded our bikes into his Tahoe, grabbed sandwiches from Earth Fare, and camped out in the back parking lot to chow down before setting off. It being a warm afternoon, the skies of course opened up with a monsoon, and he barely shut the back doors on us before the lightening hit. While waiting for the storm to let up (it never did), we talked books, what it was like to grow up in Detroit (him) and Durham (me), and family. It was one of the best dates I’ve ever had and capped with a true rain date for the next weekend.

When the following Sunday afternoon rolled around, we were ready to give the trails another go. We jumped straight on; headed past the small houses where spiderwort and Queen Anne’s lace bloomed in ditches; crossed over streets we knew more by landmarks (“This is the Coburg Cow road!” “We’re near The Glass Onion!”) than by name; and bumped into an “auntie” friend of mine who broke from hiking to give my gent a sly stamp of approval before warning us of bad weather coming. Indeed, the skies were roiling purple, and the fresh summer leaves were antsy in the restless air. But the further in we got, the more determined we were to stick it out.

By the time we crossed the first marshy area and then shot out onto a country spread (behind the U.S. Vegetable Laboratory and Clemson Center), drops were falling. Still, we came up on a couple trying to fix a funky bike chain and stopped. Another geared-out dude had paused, too, and the men huddled around the tire trying to set things right. I have to say, some old-fashioned primal female pride bubbled up when my guy got in there and, with a few maneuvers, had everything in top shape.

After that, we got into the prettiest stretch, a long dyke that cut across a swath of marsh, where egrets fished a furiously draining outward tide. They were shocker-white against the pluff mud, which had taken on that shade of eggplant-mahogany that occurs when a storm reigns pregnant overhead. We hauled it through that eerie tableau, aiming for the trail’s end about a mile up. When we made it off the water, he called out to head over to an awning under a nearby warehouse instead of the Main Road overpass ahead. “The trail’s running out here, and we won’t make it anyway,” he said. As soon as we were huddled underneath, the rains came, and we watched a lone biker head for the bridge, get stuck in weeds, then double back to our hideout. While that fellow tracked the storm on his smartphone, my beau read the skies and bested the electronics. The way home, while soggy, was fueled by shared adventure, storytelling, and a touch of chivalry when he gave me his dry pack shirt to combat the post-rain cold.

A few weeks later, he and I recounted the day to my C.E.O. sitting in her garden, eating brunch, and listening to her tales of biking as a child from Copenhagen to a small fishing village some 60 miles away. As I watched my mom and now-sweetheart talk, the joggling board came to mind again, and how indebted I am to this city for her old-fashioned ways and her wholesome adventure options.

Visit www.westashleygreenway.org for maps of the well-marked trail, plus details on closures, such as the one effecting the stretch of path from Canterbury Road to Markfield Drive through August.