Ravenel Bridge
July 2015
WRITER:
Suzannah Smith Miles
On July 16, 2005, the Arthur Ravenel Jr. Bridge (named for the state senator who spearheaded the campaign for its construction) opened amidst great fanfare, a year ahead of schedule. Folks who feared its pair of narrow predecessors, the 1929 John P. Grace Memorial and 1966 Silas N. Pearman, could now brave a trip over the Cooper River thanks to the eight-lane expanse. Exercise-seekers flooded over the pedestrian and cycling lanes, and ”traffic on the bridge” fell off tardy locals’ lists of go-to excuses. In honor of its 10th anniversary, check out more fun facts about this cable-stayed crossing 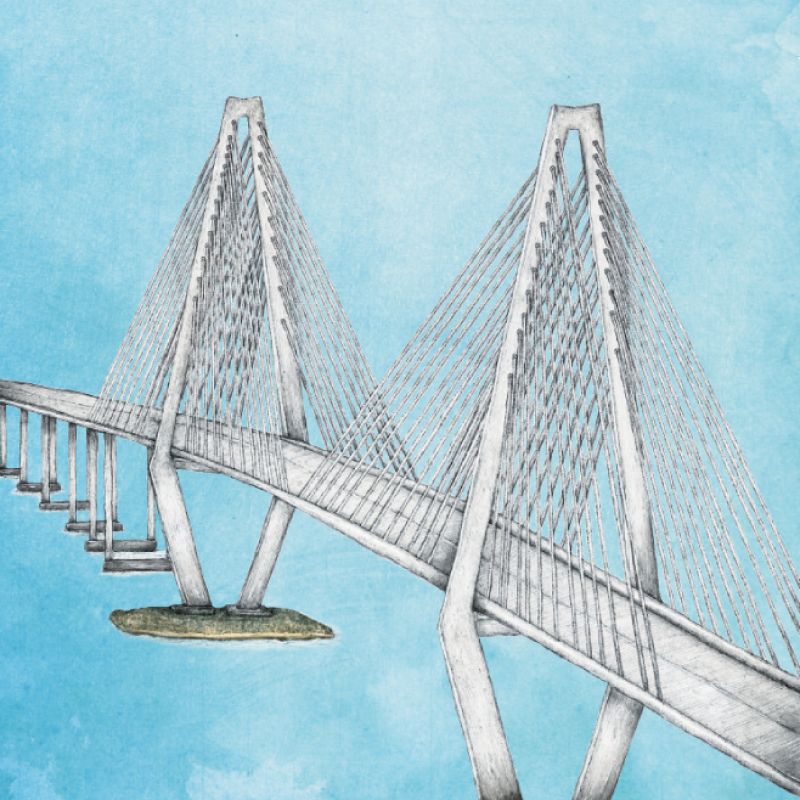 Diamonds are Forever (Tall)
The tops of the $632-million bridge’s two diamond-shaped towers are 575.5 feet above the water line—about the height of a 57-story building. Suspended by 128 cables, the roadbed soars 186 feet over the Cooper River, leaving ample room for the largest of container ships to pass underneath.

Did You know?
The 12-foot-wide pedestrian and bike path spanning more than two miles from the peninsula to Mount Pleasant is named “Wonders’ Way” in honor of Garrett Wonders, a Charleston-based U.S. Navy lieutenant and Olympic cyclist-in-training, who died from injuries sustained when he was hit by a truck near Moncks Corner in 2006.

Party Hearty
When the elegant expanse opened in July 2005, weeklong celebrations included a black-tie gala on the bridge deck—complete with a Charleston Symphony Orchestra performance—and an unforgettable $250,000 fireworks show.

Eco Facts
The concrete from the demolished Grace Memorial and Pearman bridges was used to create artificial reefs offshore. In addition, the Ravenel Bridge’s lighting is modified to lessen the impact on migratory birds, and lights are turned off after dark during loggerhead sea turtle nesting season from May to October.

Disaster Resistant
This Lowcountry landmark is designed to endure wind gusts in excess of 300 mph and an earthquake of 7.2 on the Richter scale. One-acre rock islands surround the towers to protect them from ship collisions.

Take a trip over the old Cooper River bridges, the Grace and the Pearman: