Portraits of a Vanishing South

Portraits of a Vanishing South
February 2011
They are the hardworking people of both small and large communities who make their livings toiling on the water, in the fields, and at the mills. In her new series, “Working South,” artist Mary Whyte documents these faces of the region and their often unheralded and slowly disappearing livelihoods 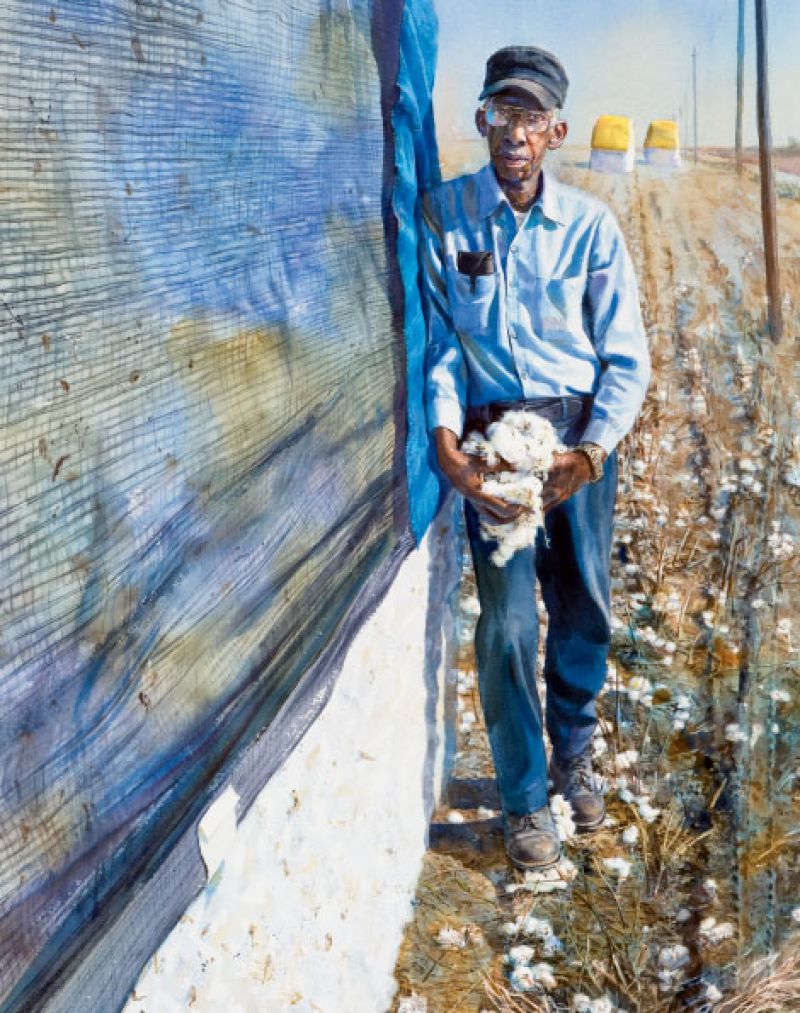 A woman in yellow gloves stands with her arms spread wide as she stretches newly spun thread in an Upstate textile mill. The badge on her shirt reads “Elaine,” and her face bears the imprint of age and experience. Her body takes a familiar pose, one that comes from years of repetitive movements on an assembly line. By a Thread is the first portrait in watercolorist Mary Whyte’s latest series, “Working South.” The exhibition of 30 paintings and 20 studies will debut at the Greenville County Museum of Art in March, then travel to five museums across the South, including the Gibbes Museum of Art next spring.

Leaving the comfort of her Seabrook Island home and studio behind, Whyte spent the better part of three and a half years finding Elaine and those like her. Traversing interstates, byways, and rural roads throughout the Southeast, she birthed this latest series of large-scale watercolor portraits, thanks to a story in the newspaper. “One morning in the spring of 2005, I was reading The Greenville News, and it showed this woman standing in front of a loom with all these threads crisscrossing behind her. I thought, ‘That would be interesting to paint’,” says Whyte. When she mentioned the story to a Greenville bank president while she painted his portrait, he told her that in five or 10 years the textile mills would all be gone. “I realized, ‘If I’m going to do this’,” she says, “‘I need to get in there now.’” After visiting that first mill, a flicker of curiosity began to burn, and Whyte started making lists of other industries that are slowly slipping from the Southern landscape. “The list just grew and grew,” she adds. “You can orchestrate a lot, but I think it’s the unplanned things and people you meet that are magical.”

Real People, Real Lives
Mary Whyte has been searching for that magic since she was a teenager in rural Ohio. Borrowing her mother’s car, she would drive to the country near Chagrin Falls to sketch Amish men, women, and children dutifully performing mundane tasks. “I think all my life I’ve been painting people who have fallen under the radar,” says Whyte. “Much of what we see in our celebrity-driven culture is people who are polished and speeches that are canned; it’s not raw or natural or human. So I set out to try and find people who are overlooked. It might be an honor to paint a senator’s portrait, but I think it’s more interesting to paint the person who cleans the senator’s office.” That innate curiosity followed her to art school in Italy, where she recalls spending her weekends at the train station, picking a stop at random and getting off to explore and sketch the anonymous faces in the unfamiliar towns.

By 1991, Whyte and her husband Smith “Smitty” Coleman, a gallery owner and guilder, had moved from Philadelphia to the Lowcountry in search of a fresh start after Whyte’s life-changing battle with cancer. “We knew that we had to move to a place that would give deeper meaning to our lives, a place where we could reinvent ourselves and start over,” she explains. One afternoon, while looking for models to sketch, the artist wandered into the Hebron Saint Francis Senior Center on John’s Island and found a group of African American women who met weekly to study the Bible, quilt, and simply be together. These 16 ladies—Alfreda, Georgeanna, Mariah, and others, most of them in their 70s and 80s—became the subjects of “Alfreda’s World,” Whyte’s 2003 exhibition and book documenting the everyday lives of rural Gullah women. In the introduction to the book, Whyte writes, “I wanted to capture as much as I could on paper, save it and protect it before it was changed and lost forever.” She has returned to this community center and these ladies for more than a decade, recording the simple beauty of the steam rising above a woman’s head as she stands at the stove and the quilt that falls over another’s lap as she knits the day away. “I think I will always paint them,” Whyte says of this group, which has become part of her extended family.

In the companion book to “Working South,” she recounts a conversation with legendary blacksmith Philip Simmons, whose portrait by the artist hangs in the Gibbes Museum of Art: “When I was sketching him, I asked, ‘What do you want people to know about you in a hundred years when they look at this painting?’ And he said he wanted people to know that he was a real, living person. This sums up the whole of ‘Working South,’ paintings that are rich with the stories of real people living real lives.”

Selective Focus
Whyte says that while she did set out to document the South’s working folks during her journey from the textile mills of Upstate South Carolina to the tobacco farms of Virginia to a drive-in movie in Tennessee, she didn’t intend to get political. “I didn’t want it to be a dissertation about industry; there’s no way I would ever know enough to be an authority, and that’s not my job,” she explains. “It’s really about the people who just happen to be in jobs that are disappearing.”

Whyte did, however, keep a journal during her travels and recorded that the 1960 State Census reported 160,000 people employed by textile mills in South Carolina; in 2008, the Bureau of Labor Statistics stated that the number had fallen to less than 28,000. Still, she says, “the remarkable thing about this project was the people I met, most of whom think their stories aren’t worth telling.”

Traveling to Miami on a tip, she found one of the last funeral bands, a group of men who started playing in the 1910s at the burials of soldiers. “I called all over Florida—the museums, the travel bureaus—and no one knew about the funeral bands,” she says of her search. Finally, she called an African American funeral home in Dade County, and that led her to a band near Overton. Whyte called and booked them for a “funeral.” The men, mostly in their 80s, arrived at the cemetery in full uniform, and she spent the afternoon sketching them as they marched around her in a circle, playing their brass instruments.

Because Whyte seems to lose herself in her subjects, there’s no sense of chore to her skillfully rendered creations. The hours translate to effortlessly captured, emotionally rich moments in time. Composed with a simple palette of colors, water, and “a good brush,” the portraits are detailed in places where she wants the viewer to look and less focused in others, because she says that’s how we see. “When you focus on one area, other areas go out of focus,” Whyte explains. “It’s a way of directing the viewer’s eye.” She says she wants to give a reason to linger and contemplate the painting. “Mostly, I’m trying to capture a feeling that I have about the subjects and their situations.” Teaching several workshops throughout the country each year, Whyte tells her students, “Be a poet not a journalist.”

For Trap—which depicts a third-generation crabber who has worked for much of his life in the small coastal town of Pin Point, Georgia—Whyte spent the day with Algernon “Algie” Varn on Moon River (named after the Johnny Mercer song). She listened to stories about his grandfather, who started the business in 1926 and built a shack where African American women shucked oysters and crabs, throwing the discarded pieces out the window and into the water. She shadowed him and witnessed his disappointment and anger while pulling up traps, including those that had been vandalized—not to mention the ones that had been poached. “He spends all winter making these traps, and a third of them were gone,” Whyte says. Pictured in his yellow waders and straw hat, Algie looks into the distance, his face weathered from years in the sun. In Whyte’s expert hands, the weight of his emotions bears down on the canvas.

Last year, when Algie Varn’s work on the river could no longer sustain his family, he sank into a depression. “The river was my refuge,” he says. “It was a way for me to escape and realize the beauty of God’s creation.” He says the painting helped him heal from the loss. “I never sought any kind of recognition for my work. Who would have thought a plain-old someone like me would be the subject of a painting?” he laughs. “But Mary was led here, and it tells me that God sees us all.”

The subjects of “Working South” clearly had a lasting impression on Whyte, who has kept in touch with them, as is her way. She shares “the wonderful news” that Algie’s place was purchased by an anonymous investor who is restoring it. “Algie and his wife are allowed to live on the property for the rest of their lives, and the area will be preserved and the crab shack turned into a museum.”  And she reports that many of the tobacco farmers she sketched are now growing organic crops. “I believe that people are resilient,” she says.

It’s that day-to-day resilience that makes what Whyte has captured so human and so resonant.