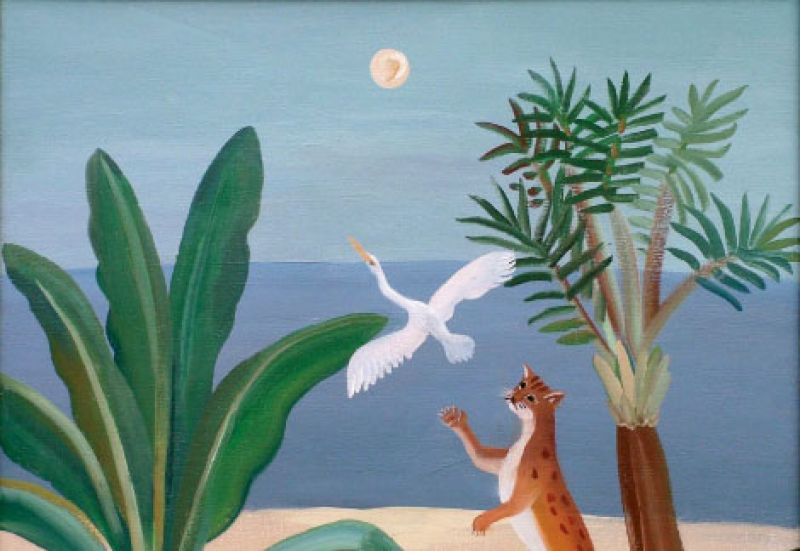 “Children’s art has always intrigued me,” reflects painter Wilfred Spoon. “It is art in its purest form, because kids don’t know what things are supposed to look like. What they draw or paint comes straight out of their imaginations and borders on abstraction.” And the artist embraces this uniquely conceptual reality in his brightly colored paintings. From landscapes and still lifes to a canvas menagerie of elephants, bears, tigers, and birds, his work explores the dynamic spirit of seemingly primitive subjects. Growing up in Charlotte, North Carolina, Spoon’s interest in art developed early, to his parents’ delight. “When I was a little kid, my parents recognized that I would keep quiet if I was drawing,” he laughs. Thus encouraged, his creative skill grew as he did, and a summer spent at the Philadelphia College of Art during high school cemented his commitment to the art world. After earning his BFA from East Carolina University, Spoon headed for New York to pursue an MFA at Parsons School of Design. He worked as a freelance illustrator for several years before relocating to San Francisco, where the change of scene ushered in a new phase of his career. Influenced by the cubist works of mid-20th-century masters such as Picasso, Miro, and Braque, Spoon began to explore his artistic identity more deeply. “Early in my career, my work was very realistic. I could mimic anything, but that became boring.” So he started to depict his subjects conceptually, drawing further inspiration from pre-Renaissance and early American art, as well as the work of modern naïve artists Henri Rousseau and Horace Pippin. Through professional solo and group shows, he soon earned a devoted following. After nine years in California, family obligations called the painter back East, and since his arrival in Charleston, his fan base has continued to grow. Spoon’s playful oils have been exhibited at Piccolo Spoleto, the former Tippy Stern Fine Art, Wells Gallery, and Havens Fine Framing. His now-trademark style conveys surfaces devoid of dimension, frontally posed forms, and occasionally arbitrary proportions that lend a surreal quality to recognizable objects. Though technically informed, the resulting pieces feel elementary, forthright, and full of youthful imagination. “I’m always drawn by the honesty and innocence of his pieces,” says Muffie Faith, owner of Elizabeth Stuart Design and a collector of Spoon’s work. “It’s dramatic, simple, and powerful.” Behind each linen canvas saturated with colors and fantastic scenes, truth and perception blend with stunning results. “I like to paint things that are simple and straightforward,” Spoon says. “It’s reality being represented...just not by how it really looks.” To see Wilfred Spoon’s work, visit www.wilfredspoon.com. For a private viewing, contact the artist at (843) 442-4865.