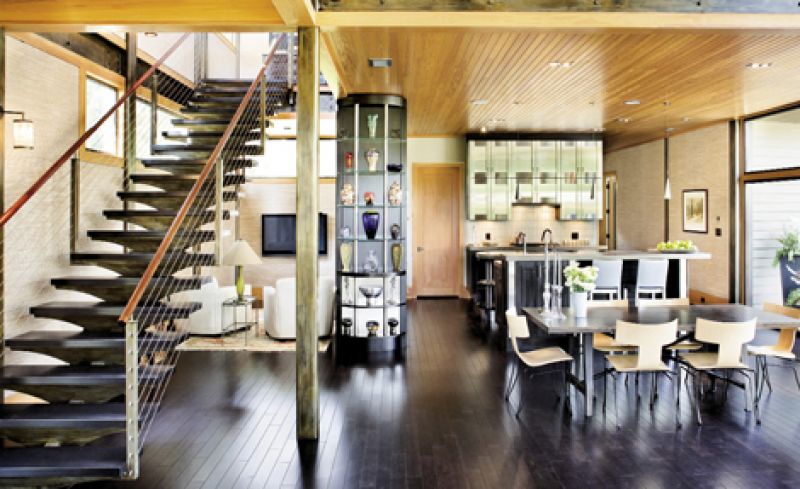 Kathleen Parramore knows where the grass is greener. Where the golf is good, and biking and kayaking routes don’t often repeat themselves. Where a glass house can get ample cover via towering oaks and magnolias, and a quiet lagoon out back is as good a water view as any.
That’s because she and her husband, Steve Sinn, have seen it all. “We had long careers in the tech industry and were fortunate enough to travel extensively,” she explains. “We got to test out a lot of retirement ideas, and no matter where we were, the question was always,  ‘How does it measure up to Kiawah?’”

In short, nothing ever did. But Kathleen’s love affair with the resort island goes back a ways. The Valdosta, Georgia, native began vacationing there in the early 1980s, “when it was a wild, wild place,” she recalls. “There was so much untouched, and I liked that Kiawah wasn’t someplace where you had to get dressed up just to walk outside, but it wasn’t honky-tonk either.”

Certainly not. And even after that under-the-radar island of old morphed into Kiawah all grown up—with a world-class hotel and PGA street cred—it never lost its top spot on that all-important list.

Hence, their tucked-away island plot shrouded on three sides by water and woods. “It was this privacy that sold us,” says Kathleen. “We knew we wanted a house filled with light, which meant big windows. So we needed a place where we wouldn’t be surrounded by other houses.”
The other thing they knew? Their hidden home behind the brush would be a contemporary one. “We’d lived in a Manhattan brownstone for 12 years, where our only avenue for modern was in the furnishings,” she adds.

Their architect, Chris Rose, laughs. “When you tell an architect you want a ‘contemporary house,’ we can go a little crazy.  The first thing I want to ask is, ‘By whose standards?’”

Turns out, the “contemporary” the couple was after was one with loft-like living spaces that fit into the natural surroundings and afford them as much natural light as can reasonably pour in. “There are four distinct seasons here at Kiawah, evident in the color of the marsh, the trees,
the lagoon. We wanted that in full view,” Kathleen notes.

Chris originally called to mind Pacific Northwest architectural ideas, highlighted by heavy timber and lots of glass. “But you can’t do that here and meet seismic and hurricane requirements.” So he began looking at steel framework and a German window system (Henselstone) that allows for the large expanses of glass the couple wanted but is much stronger than American windows and doesn’t have the interference of wood casements. “The joke about these windows,” adds Chris, “is that if you’re bracing for a hurricane, you don’t stand behind the wall. You stand behind the windows.”

With the addition of a metal roof and oversize eaves (stretching a full six feet to add a cool mid-century design element and help block the sun), Chris and the pair had their start. But they also had a dilemma common among those framing a house with all that good, sturdy steel. How do you keep the interior from feeling cold or severe?

The answer, according to Chris, wasn’t to play it safe with lots of expensive trim and drywall. “We thought, why not take the more interesting, honest route and leave steel as part of the interior detailing. Why cover it up?” says Chris, who also left the spiral mechanical duct exposed. “The solution wasn’t hiding the contemporary—it was working textures into the mix to break up hard edges.”

The ceiling, then, was softened with light, cypress paneling; the floors laid with stained bamboo; and a soaring, 27-foot chimney built from flat stones. Even the folded metal-plate stairs, a strong design focal point, are softened by natural bamboo treads.

Kathleen and New York interior designer Susan Morrow added yet another layer by wrapping the walls in grasscloth. “It’s a subtle element, particularly against the backdrop of the vegetation. The idea was to lend a feeling of warmth and keep the focus on the architecture, the true art of this house.”

Art, mixed with a few magic tricks—solutions Chris pulled out of his hat to solve puzzles they encountered along the way. For example, above the master bedroom was a perfect spot for Kathleen’s office, but there was precious little space in the design for stairs to access it. Unless, like Chris, you recall a design for steep, ladder-like steps first engineered by Italian architect Carlos Scarpa in a museum in Venice. And how to keep that dynamite deck out of sight of the neighbors (just 40 feet away)? Chris set the main rectangular structure at an angle, so that the master bedroom wing serves as a protective flank for their outdoor space.

Finally, with all those glass windows meant to preserve the view, was there a way to eliminate a key visual barrier—the deck railing required by code? Sure, said Chris, who designed the 30-foot lap pool nearly flush against the marsh side, and without a step to exit the pool on that edge. “If you eliminate access to the deck there, you eliminate the need for a protective barrier.”

The furnishings simply echo Chris’ subtle melding of form and function, style and texture. A central dining table—made from an old train trestle—is crafted of wood sandwiched between burnished steel. Painted copper floor lamps flank the stone chimney, while a structured Cantoni sofa and mod chaise are offset by a bird of paradise plant in a sunny corner of the living room.

The kitchen, designed to blend seamlessly with the main living space, is more straight-up modern. “Every home I’ve owned, the kitchen has been open to the living room,” says Kathleen, who worked with Signature Kitchens to incorporate stainless steel upper cabinetry, glass tiles, and limestone countertops. “I cook all the time, but I don’t like to keep that task cordoned off from visiting, talking, entertaining. I like to be engaged.”

And you can credit that as another reason—a simple one—that this modern house in the woods is such a gem. “Kathleen and Steve were committed to contemporary and didn’t back away from that when challenges popped up,” says Chris. “The result is a warm, honest dwelling of steel, cypress, glass, and stone. And it very much suits them.”