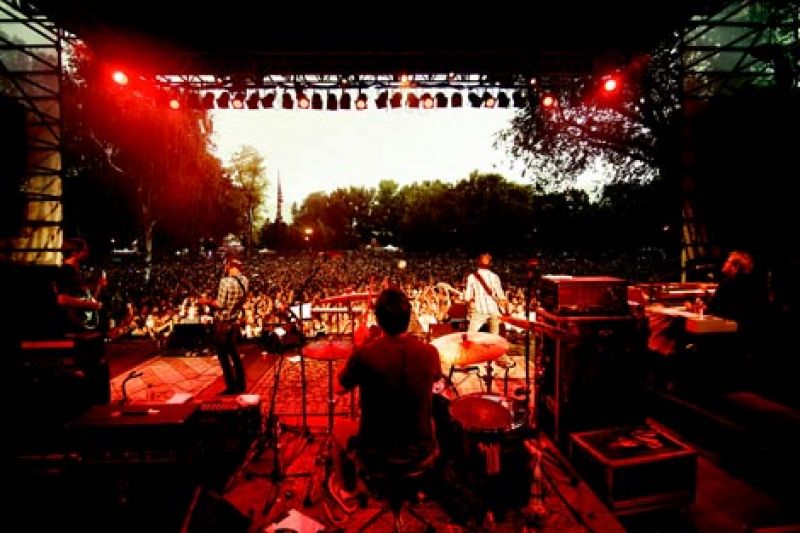 We’re in a great spot and as close to perfect happiness as we can get,” says Ben Bridwell, the lead singer/songwriter and driving force behind Grammy-nominated rock group Band of Horses, who moved back to his native South Carolina in 2007. “The album isn’t out yet, we’re playing to great crowds, and there’s no pressure on us right now. It’s as good as it gets.”

Charleston magazine caught up with Bridwell in Chattanooga, Tennessee, last summer, between shows in Chicago and Atlanta on tour with My Morning Jacket and before heading off to London to promote Mirage Rock, the band’s fourth album that continues to build momentum since its release in mid-September. “We hit it pretty hard, especially when an album is being released,” he says of their frenetic tour schedule. “What the schedule doesn’t tell you is that we’re out on promo trips, playing radio stations and special unannounced gigs, and doing interviews all over the world to bring the music and our faces right to the people.”

Currently signed to Columbia Records, the group is probably best known for the Grammy-nominated Infinite Arms album, featuring “Laredo,” which Rolling Stone dubbed one of the “50 Best Songs of 2010.” And when not cruising across the states via tour bus, jetting to Europe, or—as was the case this fall—running the rails with Willie Nelson’s Railroad Revival Tour, Band of Horses disperses: Bridwell and drummer Creighton Barrett to the Lowcountry; keyboardist Ryan Monroe, who grew up with Bridwell in Irmo, South Carolina, to Boston; lead guitarist Tyler Ramsey to Asheville; and bassist Bill Reynolds to Ojai, California. “Needless to say,” notes Bridwell, “we don’t rehearse a whole lot.”

The ensemble shares high hopes for the album, which was produced by studio legend Glyn Johns, who recorded and mixed The Who’s Who’s Next, with other credits including The Beatles, The Clash, The Eagles, and Eric Clapton—to name a few. “I’m a huge Ronnie Lane (of Faces) fan and Glyn worked on that stuff as well,” Bridwell says. “We were going for that classic vibe and trying to mine Glyn’s past in a way. We played stuff that would fit in that canon of The Rolling Stones, Faces, and The Who. It’s half pandering to and half tribute to and meant to be respectful to him and our favorite bands.”

In its early studio work, Band of Horses projected an ambient, reverb-drenched sound reminiscent of My Morning Jacket that provided a sonic blanket for Bridwell’s reflective, somber lyrics, much in keeping with the overcast urban grit of his then-Seattle home. With Mirage Rock, Johns has helped guide them into new sonic territory, a space filled with quirky time signatures and broader emotional range. Through the recordings, Bridwell has managed to tap into the newfound comfort zone he embraced following his return to South Carolina.

The songwriter’s more relaxed Lowcountry persona is revealed throughout Mirage Rock, a decidedly different album from the darker recordings of the band’s earlier, more hedonistic days. “It’s not sad for me here,” Bridwell says of his Lowcountry home base. “Seattle was incredibly depressing and sometimes in a very inspiring way.” Reflecting on the difference, he adds, “I love both sides. It might be time to switch back to some of the darker areas and the themes that come with them, as I’ve written three albums now in ‘Happyville.’”

New tracks “Knock Knock” and “A Little Biblical” are playful and upbeat, echoing a mid-career shift Wilco made with songs like “Heavy Metal Drummer.” Other standout tracks include “Slow Cruel Hands of Time” and “How to Live,” both capturing that Ronnie Lane/Ron Wood swagger of Faces classics like “Glad and Sorry” and “Fly in the Ointment.” Rattling off early influences such as Archers of Loaf and Dinosaur, Jr., in addition to Neil Young and other bands he loved as a teenager, Bridwell sums up the approach on the new work: “I guess we’re trying to sound like America sounding like CSNY [Crosby, Stills, Nash, and Young] with J.J. Cale thrown in,” he reflects, “kind of dry with that waltz thing going on.”

At home in the Lowcountry, raising two girls with his wife, Bridwell has fallen into a routine that he relishes between tours. “The atmosphere surrounding my life is different: I’m not hung over all the time, no time to be a young person anymore,” he says. Day to day, the lanky, tattoo-clad dad likes to keep it simple, hanging out with friends, playing occasional trivia at a bar, but, he notes, “As soon as I get my girls to school, I head out to our band space and just write all day until I have to go get them.”

Bridwell recalls his first exploit in Charleston as a music-mad teenager in 1994. “I ‘borrowed’ my mom’s car with a girl in tow and bolted for the cultural Mecca that was Chucktown,” he says. “Pavement was playing that weekend on their Crooked Rain tour, and my brother (who attended the College of Charleston) at least hinted that he could get me in if I had a somewhat decent fake ID. It worked like those never do, and we ended up seeing my favorite band from the crow’s nest platform at the Music Farm. It was the beginning of my adult life right there.”

Ironically, that fateful evening drove the singer away from South Carolina on a quest to find that same feeling every possible night, he says; however, “The further I got from that experience and the area over the years, I realized that was exactly where I wanted to be.

“I really cherish my time that I get to be in Charleston—perhaps it’s the nostalgia of where you come from, but there’s a real sense of home for me that I don’t get for most of the year,” reflects Bridwell. “It’s a pretty adult life, nothing too exciting about it.”
In another breath, the artist is cooking up plans to bring a little excitement to the next hometown show, yet to appear on the tour schedule. “We don’t want to repeat ourselves, and we’re trying to get something cool going down here, a mini-festival outdoors—something unique and killer.”

That’s not to say Band of Horses’ summer tour with My Morning Jacket has been tame. “We’ve been inspired by the way they handle themselves on and off stage,” he notes. “They’re interplanetary time travelers, but it’s funny how genuinely sweet they are.” As if describing a worldview he aspires to inhabit, Bridwell continues, “They’re so incredibly tight, such a force live, and the fact that they’re so humble is confusing—some bands have more anxiety and ego about everything.”

Bridwell anticipates the wave of public opinion coming soon to pass judgment on the cultural value of Mirage Rock. “Everything will start heating up real soon, and those outside elements can add to the anxiety,” he says. “You’re on edge waiting for the other shoe to drop.” Then his mind returns to the ease of the Lowcountry good life. “But, we’re in that perfect space—once you’ve mastered your album, touring with your favorite bands, and the reviews are still at the printer.

“I’m proud of where we’ve gotten. Not only the success of our operation, but how we’ve adapted as human beings and family members,” says Bridwell. “If it all goes down in ashes of irrelevancy tomorrow, I’ll know that we worked our butts off, made some great friends, and cared about what we’re doing. Even if we don’t take ourselves incredibly seriously, the passion is obvious.”

To capture the spirit of the new sound visually, Band of Horses ventured to the Utah desert to shoot a tongue-in-cheek, spaghetti western-style clip for Mirage Rock’s first single, “Knock Knock” with director Jared Eberhardt, former creative director for Burton Snowboards whose credits include ads for Puma, Altoids and Target featuring Shaun White. In a recent NPR interview, Eberhartdt described the treatment, “Those old films were all about a bunch of guys going to exotic places and staging adventures, with very little craft or consideration to lighting or aesthetics,” he says, “It was really fun and sometimes difficult to get my head around trying to make things look bad, but not too bad.”