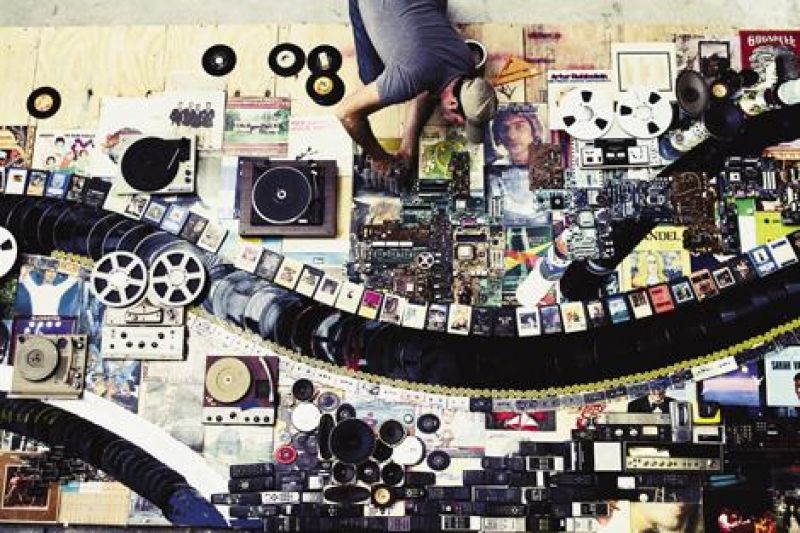 Out of the mind of Jarod Charzewski come larger than life army men carved from stacks of old books, poised at the ready, frozen in combat stance. He’s built a tower of precariously stacked cast-off floral vases and turned a ceiling into a sea of upside-down feather-like grass plumes that sway to the random rhythm of motion-controlled fans. An installation artist and assistant professor of sculpture at the College of Charleston, Charzewski works with just about any media that falls his way. He’s a self-proclaimed “natural scrounger of things,” finding unlikely usefulness in the detritus of modern human life. A hundred or so mannequin legs and a vast collection of pop tabs from aluminum soda cans are among the flotsam and jetsam he’s stockpiled for future use, as are a number of hole-ridden leather footballs and scores of dismantled Little Tykes play structures, beautifully faded by the sun.

Charzewski chalks it all up to simply being resourceful. “I’ve always been the guy in the Army surplus store getting large quantities of weird things,” says the 42-year-old Canadian. “It wasn’t always about art, it was just something I did.” He credits his pursuit of installation to his experience growing up in the strong art community of Winnepeg, Manitoba. “People there do what they want to do without worrying about making a profit on it. There’s a lot of installation, video, and performance art,” he says. “I landed in sculpture and installation.”

Out of his almost recreational interest in the odds and ends that find their way into surplus and secondhand stores, Charzewski found unique ways to give those things new life and at the same time, communicate a message. Take his Scarp exhibition that debuted at the Halsey Institute of Contemporary Art in 2008, for example. After working out a fortuitous loan arrangement with Goodwill Industries, Charzewski sculpted gently rolling hills and rock formations out of piles of discarded clothing, the colored layers mimicking scientific cross sections of land masses. He’s since recreated it in various forms 10 times around the U.S. and Canada.

“I think what resonates the most is the lifespan of our belongings,” he says. “That’s what I’m trying to emphasize. All of this clothing was eventually headed for a landfill site. I like the idea of promoting a second life, a reuse of things.”

Another piece, Sunfire Remains—a permanent installation covering a wall at The Original Ms. Rose’s restaurant in West Ashley—is made up entirely of the china, glassware, silverware, serving trays, even seat cushions from Sunfire Grill, which previously occupied the site. The striations of color and texture suggest the layers of debris settled in a landfill.

“Jarod Charzewski has created an impressive body of work that offers us the opportunity to reflect on our consumer culture and the lifespan of our belongings,” wrote Karen Ann Myers, now the assistant director at the Halsey, in support of his entry to the 2011 South Carolina Biennial Exhibition in Columbia. “Our discarded items are literally reforming the permanent layers of the Earth. Jarod’s work beautifully simulates the organized disposal of waste in landfills, demonstrating years of accumulation as a choreographed synthetic landscape.”

Charzewski’s CV names a host of solo and group exhibitions across the U.S. and Canada, at galleries and festivals, followed by a lengthy list of grants and prizes. But always the artist from Winnepeg, awards and recognition aren’t what propel him forward. “I’m extremely hungry for that next exhibition, that next idea, whatever it’s going to be,” he says. “I’m always pushing forward. I’m always interested in the accumulation of things, and I have so many other ideas that I want to resolve.”