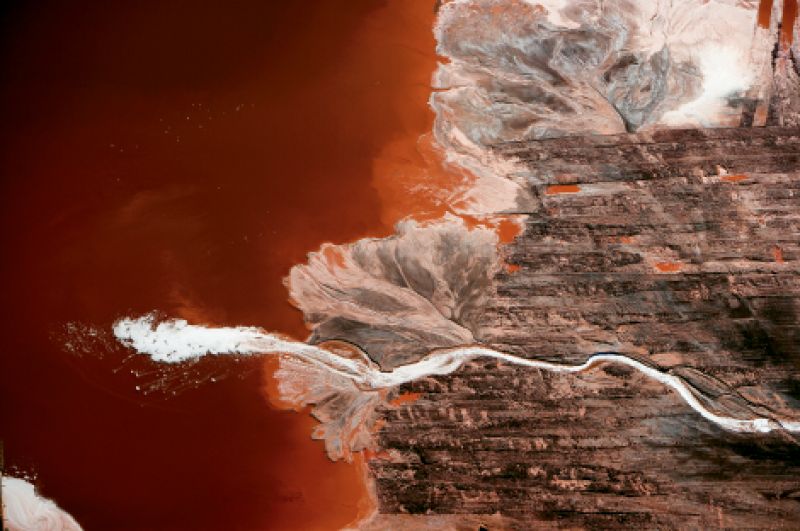 Environmental activist and photographer J. Henry Fair believes miracles can happen. Called a “provocateur” during a 2009 Today Show interview, Fair wants to use his art to effect change. A natural teacher, he rattles off statistics about recycling—for example, that for every soda can we recycle instead of trashing, we save enough electricity to run a 100-watt lightbulb for 20 hours, a computer for three, or a TV for two. He wants his work to challenge notions about hot-button topics such as climate change and to encourage dialogue. “One person can make a difference,” he insists.

The scarred landscapes showcased in his aerial photographs introduce disturbing realities to viewers, but the abstract scenes also appear quite
beautiful. Capturing elements of light and dark, beauty and damage, Fair’s images serve as both documentary and emotional instigator. In one, red and gray coal ash bleeds and swirls like blood through a vein. In another, oil burns off the Gulf of Mexico in massive dark clouds above small boats.

The Charleston native, who’s now based in New York, chooses not to identify the polluters in his work, asserting that there’s no need to name the bad guy. “Whether it’s paper mills, power plants, and other industries pumping 1,000 pounds of mercury into the air or facilities in ‘Cancer Alley’ along the Mississippi River, these producers are acting within the rules and regulations we’ve established,” explains the artist. “We’re the ones permitting this stuff; these companies aren’t breaking any laws.” While some of the photographs depict obvious locations, such as the BP oil spill, many display a conceptual style of vivid colors and shapes, and the location becomes irrelevant.

Post-Katrina New Orleans was one of the first regions the self-taught photographer explored. But he couldn’t grasp the big picture from the ground, so he decided to board a plane. “What I found was amazing,” he remembers. Now his 1,000-foot sleuthing is about specific issues, such as exposing the realities and dangers of coal ash.

In fact, when the artist returns to the Holy City this month to exhibit pieces from his “Industrial Scars” collection at the Gibbes Museum of Art, he brings with him several images from the Charleston area, though exactly which ones will remain a mystery. “Plans to exhibit works from this series began as early as 2007,” says Sara Arnold, Gibbes’ curator of collections. “At the time, his attention was turning southward, and the photographs he was creating were stunning, both visually and intellectually. Though abstract in presentation, the images are of real destruction not so far from home.”

Charleston, it seems, remains a place of great meaning to Fair. The native son spent 16 years here, attending Charleston Day School and Porter-Gaud. “A return to the South is always a great rejuvenator,” he says. “For me, Charleston is about tradition and family, and the importance of those increases with the years.” Wanting future generations to share the same wonders he enjoyed as a boy, Fair hopes his images will inspire the public to act to preserve our natural heritage.