Harboring History
WRITER:
Melissa Bigner
Seeking out the mysterious truths beyond the brickwork at Fort Sumter 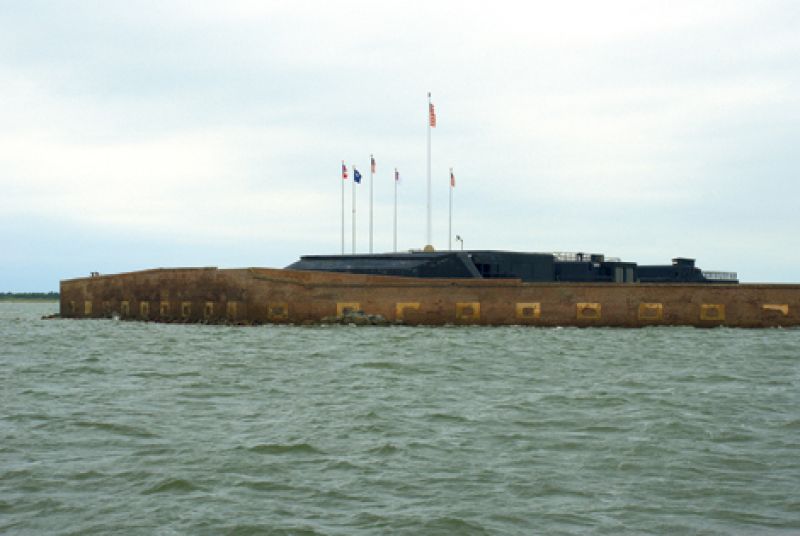 I have climbed up a Mayan temple, walked through countless castles, laid my hands on the boulders of ancient Viking tombs. But aside from one underground European dungeon, none of these places rattled me like Fort Sumter.

Up until a recent visit, the fortress sat as an innocuous punctuation mark on the horizon for me, a check-it-off-the-list tourist spot in the myriad guidebooks and Battery walk-’n’-talks. But no matter how weary I am of phrases like “The War of Northern Aggression” or debates over this or that flag issue, there’s no denying that this storied site harbors a haunting past surely worth exploring, especially on a moody winter day. (Plus, in all honesty, the ferry ride offers one of the best ways to see our city from its port origin perspective.)

Though initial construction on the fort—meant to defend Charleston from foreign attack—began in 1829, its purpose changed in December 1860 when South Carolina delegates voted to secede from the Union. Less than a week later, U.S. Major Robert Anderson took over Fort Sumter in the middle of the night following Christmas. It wasn’t until the next April that one of Anderson’s West Point artillery students, Confederate Brigadier General Pierre G.T. Beauregard, forced his former instructor to surrender after a 34-hour engagement. The sole death of the entire “King of the Mountain” battle came during the fiery salute to Anderson’s white-flag retreat when U.S. Private Daniel Hough’s cannon fired prematurely and killed him. Over the next two years, the Confederates busied themselves strengthening the structure. Then, in the summer of 1863, Federals began bombing and besieging the fort to little avail—it was only abandoned on February 17, 1865, when U.S. General William T. Sherman began moving north through South Carolina from Savannah. On the following April 14, the anniversary of the Union’s surrender of the fort four years prior, Lincoln ordered Anderson to raise the old Union flag there in a ceremony that the President himself declined to attend. According to the park ranger who relayed the fort’s timeline, Lincoln may have skipped the festivities because he wasn’t welcome in the Holy City. While that’s debatable, all sources do confirm that the Commander in Chief did have other plans: tickets, it turned out, to Our American Cousin at Ford’s Theatre.

Fascinating stories, all. But what was it about Fort Sumter that shook me so? Perhaps it’s that this pivotal, political, raw time in American history happened right underfoot not all that long ago in our national psyche. My maternal grandmother, for instance, turns 100 this summer, God willing; the fort’s heyday was just a generation and a half before her time. Meaning it happened as close to her birth as the Depression occurred to mine.

And on my dad’s side? My long-passed, Louisiana-born granddaddy was raised by his one-legged grandpa, a man who lost his limb in a train accident on the way to join up in the Civil War. The timing made me wonder how a nation can change so fast—and so slowly—both. To go from infighting to strip malls; from cannons as firearms to cannons as relics; from slaves making bricks for a fort to me collecting antique bricks for a garden path—it’s all mind-blowing and bewildering.

It’s almost as curious as the photos being sold as we disembark at the Aquarium Wharf. The initial snaps were taken in front of a green screen as families boarded the boat, but the prints show each grinning group on a foredeck with a sunny view of the fort superimposed behind. That got me wondering about perspective. Is it like one of those Venn diagrams, where only those in the overlap of circles truly know which end is up? Or is it just part of the human condition to never know what really went down and why? I’m not exactly sure; I can only attest that rather than a blip on the harbor scene, Fort Sumter—and all that happened there—is now a more magnetic enigma than ever.