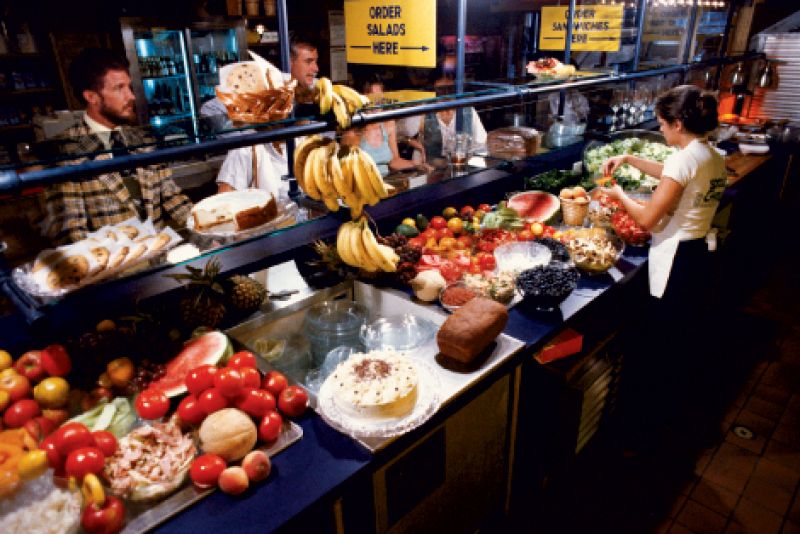 Vegetarian alternatives, espresso machines, and a comfortable atmosphere catering to a busy clientele.

This may sound like a checklist for any modern restaurant looking to set up shop in Charleston, but it actually describes a forward-thinking eatery started in the late 1970s: Sprouts & Krauts.

The cafeteria-style spot was founded by three Lowcountry businessmen, Harry Waddington, Christof Weihs, and Franz Meier, who also owned The Colony House and The Wine Cellar restaurants. With the new venture, they aimed to offer locals a quick, healthy dining option. The first location opened in what was then Marion Square Mall, situated in part of the space most recently occupied by Millennium Music.

Rather than traditional offerings, Sprouts & Krauts’ bill of fare included a wide range of salads (such as the Spunky Spinach) rounded out by European-flavored dishes including Vegetable Strudel in Pastry. The unique concept, coupled with affordable pricing—nothing was more than $4 during most of the 1980s—garnered a fiercely loyal customer base.

As for the restaurant’s name? It had been decided rather late in the development process, when Waddington joked, “Are we going to have sprouts served up by a couple of Krauts?” Neither Meier nor Weihs, both of German descent, took offense to the appellation, and the name stuck. In 1983, a second Sprouts & Krauts opened in Citadel Mall, but was redesigned and named Old Munich Restaurant a year later. The downtown location lasted until 1987, when its founders moved on to new endeavors.

With rumors suggesting that a new shopping center will be opening where Marion Square Mall once was, we can only hope that an establishment as innovative as Sprouts & Krauts will be among its offerings.