Domestic Divas
September 2012
Move over Martha, the founders of the Charleston Academy of Domestic Pursuits are schooling locals on all things home entertaining, including hosting the perfect cocktail party 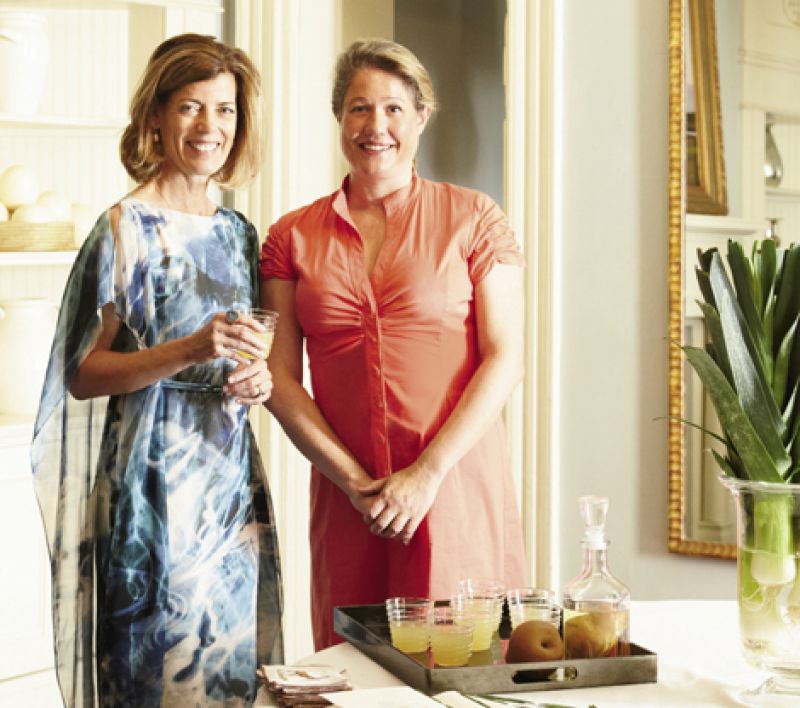 Call it the cocktail party conundrum: How does one juggle a small plate of hors d’oeuvres, fork, napkin, and beverage while nibbling daintily, making scintillating small talk, and shaking hands? Truth is, it’s impossible. “People don’t have three hands,” says Lee Manigault, who, along with Suzanne Pollak, founded the Charleston Academy of Domestic Pursuits (CADP) in 2011.

They suggest that party hosts take plates and forks out of the equation altogether and stick solely to finger food—“Two bites max, preferably one.” And those ubiquitous paper cocktail napkins with cute quips on them? Unless they’re a real hoot, opt for linen, insists Pollak. “None are beautiful enough to get over their ‘paperness.’”

These are just a few of the pointers veteran hostesses Manigault and Pollak breezily impart as they mix old fashioneds and pass trays of cheese coins during a recent class on how to throw a cocktail party. Since launching the academy, the “deans,” as they call themselves, have offered a revolving curriculum on the domestic arts—from hosting an oyster roast to canning to making edible holiday gifts—at homes around town. The courses are part instruction, part fun (“It’s not MIT,” Manigault laughs, “it’s supposed to turn into a party at the end”) and have been a huge hit, regularly selling out, largely by word of mouth.

Both women have impeccable entertaining credentials. A descendant of John Jacob Astor, Manigault grew up in Millbrook, New York, where she was regularly tapped to pass hors d’oeuvres at her parents’ parties, and later those of their friends. “I did it instead of baby-sitting to make money,” she says. “I think it was because I liked doing it so much that I added a bit of extra
energy to the event.” Manigault later channeled that energy into hosting fundraisers at her King Street home here in Charleston, where she lives with her two daughters. One of her most memorable bashes? “I gave a party to celebrate my divorce—it was called the Emancipation Proclamation—and my ex-husband came dressed as Abe Lincoln,” she recalls.

The daughter of a diplomat, Pollak was raised all over Africa. “Most nights, my parents either hosted parties or attended someone else’s,” she says. Oftentimes, she tagged along. “I especially loved standing with my father, watching how he connected to people and listening to his stories.” She remembers having to step over pythons on the streets of Enugu, Nigeria, on the way to a cocktail reception, where guests in the know never set down their drinks, lest the resident monkeys drain them.

Like Manigault, Pollak’s own fêtes took on a life of their own; an annual Halloween costume party at her and husband Peter’s historic Beaufort home was a particularly coveted invitation. In addition to raising four children, she coauthored The Pat Conroy Cookbook and Entertaining for Dummies and was a representative for Federated Department Stores for five years, giving seminars on decorating, entertaining, equipping kitchens, and cooking.

The two women met, fittingly, at a party in town. For years Pollak had been mulling over the idea for the academy and saw Manigault as a kindred spirit. “We both have PhDs in all aspects of entertaining,” says Pollak. “Concocting cocktails, baking bread, flaming fish, catching and growing our dinner—we’ve done all that. Each of us has strong opinions on ambience; organization; mixing personalities; and collecting silver, linens, and china. There isn’t a part of the art of entertaining and running a house that we don’t enjoy and haven’t thought long and hard about.”

Their motto, “live at home,” particularly resonates with Charlestonians, whom they claim have a greater penchant for opening their houses to friends than bigger city dwellers—New Yorkers, for instance—who tend to socialize at restaurants or cafés.

And your address need not be South of Broad, they say, to throw a fabulous party. In fact, the deans insist the cozier the space, the better. Even if your house is sprawling, confine a cocktail party to two rooms, such as the dining and living rooms, by setting up the bar and buffet in one of them. “If guests can’t see everybody, they keep looking for the party,” notes Manigault.

The deans urge their students to mix up the guest list. Cocktail parties aren’t about social paybacks, says Pollak, “You have your friends and people you want to get to know.” Then invite some eye candy. “My father always said you have to have some gorgeous women there because people like to look at them—men and women.” Add a specialty cocktail, delicious finger food, background music, low lighting, and you’ve got the makings of a killer bash.

The difference between a good and great party, however, is you. The deans liken the host to a circus ringmaster. Start by greeting each of your guests as though they are the person you want to see more than anyone in the whole world. “Put them at ease right away with a welcome and a drink, whether it’s a glass of water or a glass of wine. They want something to do with their hands,” says Pollak. Then give them a task. “Go find (fill in the blank), you’re going to love her!” People need to be guided no matter how social they are.”

Passing a tray of hors d’oeuvres allows hosts to monitor the event’s success. “You can tell how a party is going by listening to it—a good party hums—and it gives you an excuse to save guests who are being subjected to the details of another’s gall bladder surgery,” says Manigault.

“The number one thing is to have fun,” adds Pollak. “If you’re having fun, then everybody else will.”

According to the deans, ice is all the rage right now. And while you likely won’t want to invest in a $10,000 ice machine to make the latest cubes, you can create ice spheres for less than five cents with this simple eye-catching trick. A single ice sphere melts more slowly than conventional ice and maintains the integrity of your signature cocktail.

Twist up a long, thin piece of aluminum foil and form it into the shape of a ring. Use bottled water to fill a balloon until its circumference is slightly smaller than that of your cocktail glass and tie off. Rest the balloon atop the foil ring. This prevents the balloons from getting a flat side and keeps them orbicular while freezing.

Place the filled balloons into the freezer the day before the party. Plan on one per glass. At party time, cut the top of the balloon and peel rubber off the ice. If sphere is too big to fit into glass, simply run under hot water until ice shrinks a bit.

Forget Evites: If you’re not mailing invitations, call guests on the phone to invite them.You’ll typically get a response right away and you can generate excitement for the party by the tone of your voice.
Make a List: Work backwards from the very last thing you’ll do to prepare—light candles, put out ice, etc.—and spread chores out over several days. “A half an hour before your party starts, have a drink and take a bath,” says Lee. “Half the fun is getting ready.”
Don’t Skimp on Alcohol: Have one specialty cocktail that guests can serve themselves and a selection of the highest quality liquors you can afford. On a budget? Trim down the options. If you’re expecting 40 or more guests, hire a bartender (or two if the guest list tops 100).
Get Creative: No Spode on hand? Use (nonpoisonous) leaves from your garden to decorate plain platters.
Tone Down the Tunes: “You want background music,” says Suzanne. “That means no vocals unless they’re in another language.”
Turn Down the Lights: The darker the better, insist the deans. Think votive candles. “The light from candles makes everyone feel beautiful.”

<p> At our “Men’s Only Dinner,” guests enjoyed sitting on the porch of the Roper House sipping old fashioneds containing lemon peels grown at the Miles Brewton House in the Historic District.</p>

<p> When you plan a cocktail menu, consider different textures, tastes, colors, and sizes, balancing salty, sweet, crunchy, and gooey. This dish is easy to make and offers a sharp citrus flavor that contrasts nicely with the other offerings.</p>

<p> These crispy, salty, and cheesy bites are perfect companions for a cocktail. Pre-prepared logs can be kept in the freezer for up to three months at your beck and call for impromptu party guests.</p>